The cod are one of the best eating fish, technically a ling cod. Fantastic when breaded and deep fried. Here they are commonly called mariah, and almost no one wants them. Often you can find them thrown out on the ice. People have the weirdest ideas about what is a good fish or not. Apparently when commercial fishing started on Lake Winnipeg, they considered walleye a garbage fish and would throw them out.

I don’t like touching the ling.
A fish should not twist and wrap itself around your arm like that.

I’m not complicated ( same for my son )
We eat most anything we catch.
Some days we stop at the grocery store on the way home and lie about the days catch…

A friend did that once my grandfather couldn’t stop laughing as he asked how often they catch salt water fish in the river. Oops I guess someone should have payed more attention to what they bought. I was a small kid and still remember that one.

This naming is all very interesting. I’ve heard people mention ling, but I’d never seen one before. We have small and large mouth bass, another of my favorites. I was pretty lucky, we lived right on the shore here. The lake was our back yard, bullheads off the dock. 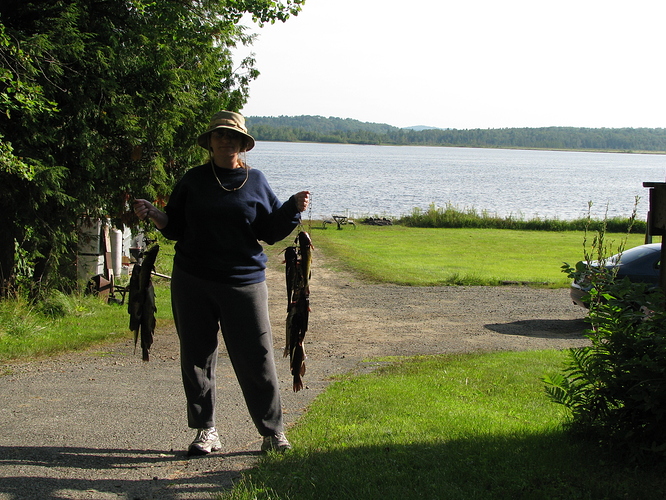 My sweetheart likes to fish more than I do. These were caught in daylight hours. They hit even better at night.
Pepe

Yeah, skinny dipping, or even dipping toes in the water seems a little concerning. I’ve heard more than one story of someone dangling fingers over the side of a boat attracting alarming attention. Twice I have witnessed a small mouth bass on the line serving as bait for a large pike, but haven’t landed one that way yet.

My dad told us not to dangle our fingers in the water for that reason. Here he is with a northern pike from Big Tupper Lake circa 1940. 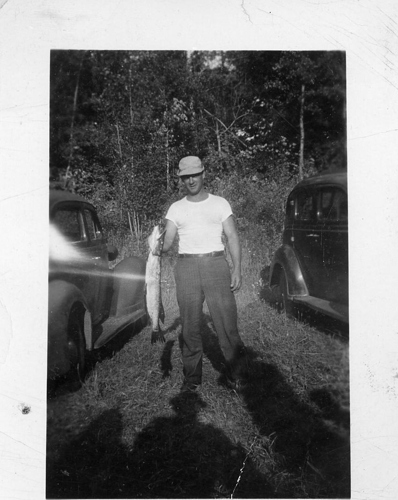 Perfect size Pike.
They become a bony nightmare to clean if they are too large.

You can tell a lot about what they eat by the colour and texture of the meat.
A chum of mine is pulling some out of the river near a power project north of here.
The flesh has slight pink tint to it and they are full of craw fish ( and very nice eating )

South of me an hour is spoon lake.
Their they get too large to eat ( so I put them back ) and they are eating the bass.
The water is warmer and the meat is soft and white ( sometimes a bit wormy ) but they are still good to eat.

Talk about the trash fish.
We never ate the pan fry ( blue gill rock bass white bass ) and never ever the suckers.
I still don’t eat the pan fry, but an Italian chum of mine can pickle them and make a really fine treat out them.
But it has to be sucker from cold water and there are some other seasonal criteria.

Same went for a lot off things like the fresh water muscles and craw fish, even the frogs were fair game around the table at our camp.

Suckers are fantastic pressure canned, very similar to canned salmon. Typically they are dip netted in the spring spawning run. Since they are considered a garbage fish, there are no limits, if you want to fill a truck to feed pigs, that’s fine. Funny thing is despite having no fishery management they are always abundant. Fished and sold commercially as mullet. Pretty nice smoked, and they pickle as good as herring. And they make a pretty fine soup, including the head if you aren’t squeamish.

Talk about bony, I caught a gar in the mouth of Otter Creek on Lake Champlain when I was a kid. No meat on that.

I checked out the Otter “Creek”. The history is interesting. Wow, it’s 112 miles long and empties into the Southern end of Lake Champlain at Ferrisburgh. And I thought a creek was something you could just wade across

Hi Dick,
Well, My wife and I took the ferry from Plattsburgh to Grand isle yesterday for an appointment in Burlington. The main portion of Lake Champlain is ice free. Really rare for February. Some of the bays are iced over, but the ice is dark with open spots and scant few shanties. I’ll be darned if I’d chance the ice. 2 young snowmobiler brothers drowned in my home town of Tupper Lake on Raquette Pond last week. They were in a group, but no one was able to save them. I can’t imagine that feeling of helplessness. Raquette pond is really only an enlarged section of the Raquette river meaning there is always moving water through it. You have to know where that channel is to be half way safe. This makes 5 snow mobilers to drown in that stretch in the last 10 or 15 years. Pretty sad. 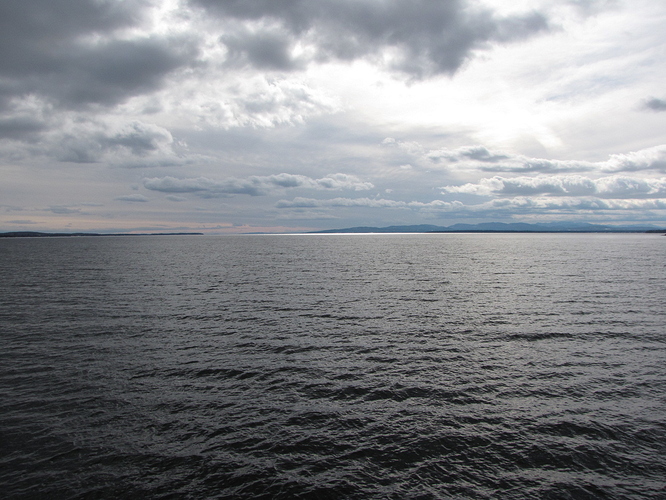 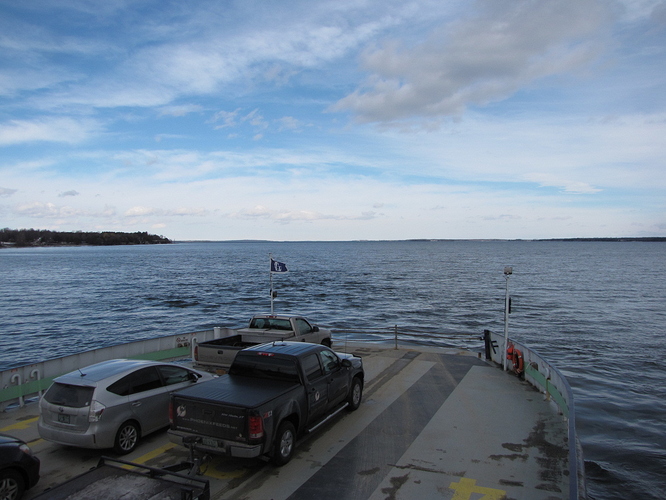 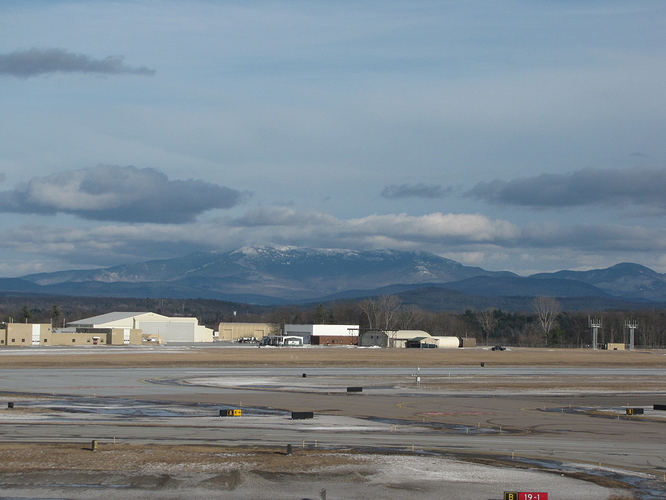 Mount Mansfield from the observation tower at KBVT 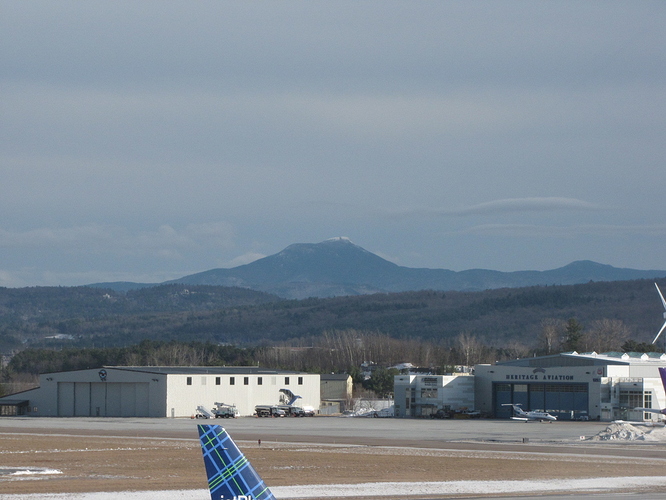 Camel’s Hump Mountain from the observation tower at KBVT
Pepe

Hi Pepe
Nice pic of the hump. My favorite VT mountain. You can see why it is also called “Le Lion Couchant”.
I have friends who live on the lake in Bridport. No ice at all. Usually they’d be out fishing by now.
A good friend of mine went through the ice and drowned jan 25, 1995 down by the bridge. He was flying along pretty fast in an iceboat he built and hit a soft spot.

I was sorry to hear about your best friend. I had a somewhat similar incident. I did a tour in Nam and the week before I came home my best friend was killed in a car accident. Go figure.
On a brighter note, I just had to look up the phrase. Here’s what I found.
Couchant is the present participle of the French verb Coucher, which means “to sleep.” Therefore, couchant means “sleeping,” and Samuel Champlain named the mountain the Sleeping Lion. It’s not a stretch to see it.
Pepe

Hi All,
My wife and I took a ferry ride from Plattsburgh, NY to Vermont. I was able to get some nice shots of Whiteface Mountain and a local old resort turned Clinton Community College and a clearer shot of Mount Mansfield from KBTV airport.
Pepe 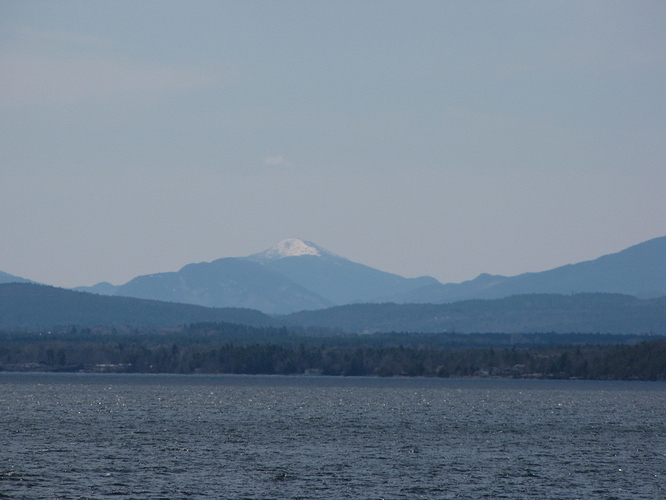 Whiteface Mountain, highest in the Adirondacks at 4867’. Taken from ferry from Plattsburgh, NY. 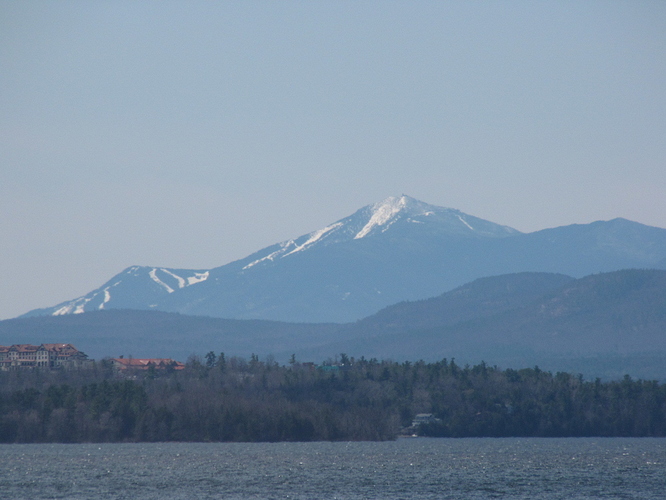 Yes, those are ski slopes to the left of the peak, yahoo! We’ve taken the gondola ride up in summer, what a gorgeous view! Can’t locate those pics yet 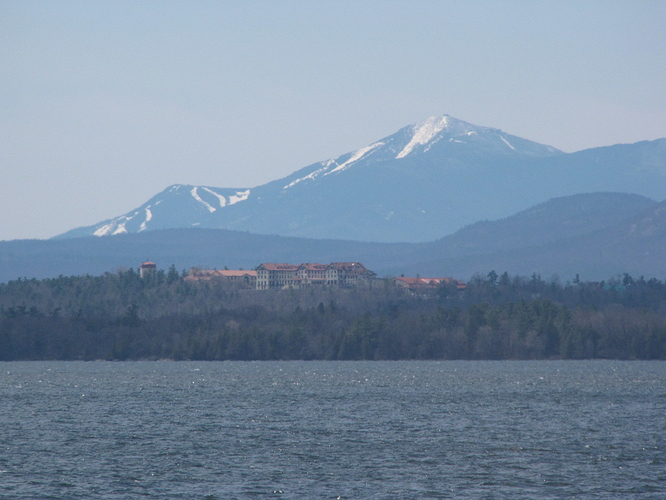 Had to wait for this line up. The present Clinton Community College on Bluff Point was once the historic Hotel Champlain. Lake Champlain elevation is 95.5’ above sea level. 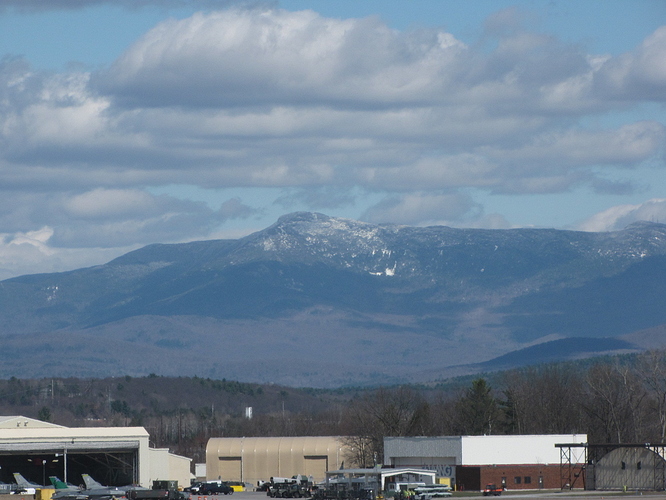 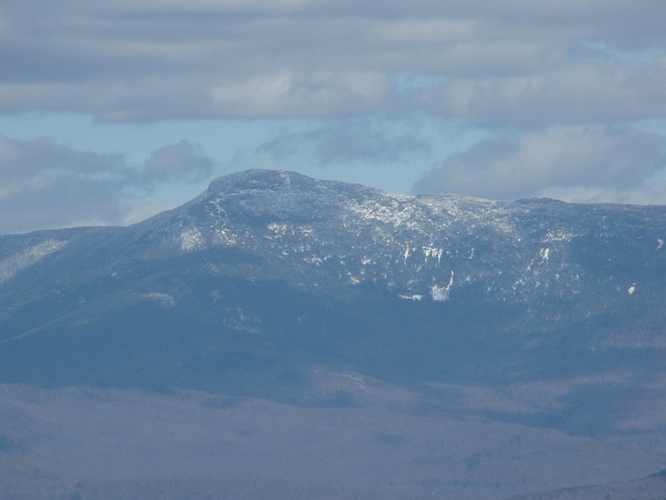 A clearer view of Mount Mansfield (4393’, highest in Vermont) from KBTV Burlington, Vermont

I just found these oldies. 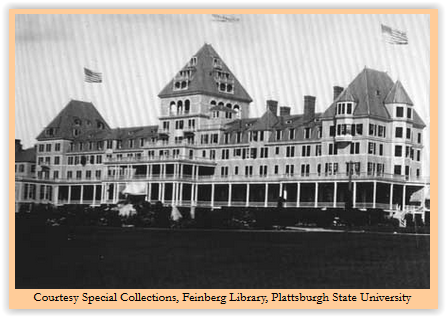 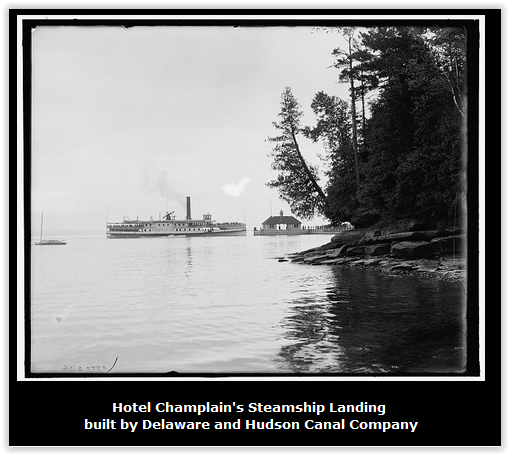 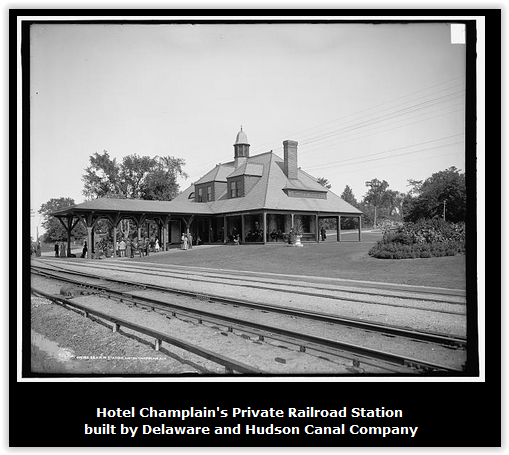 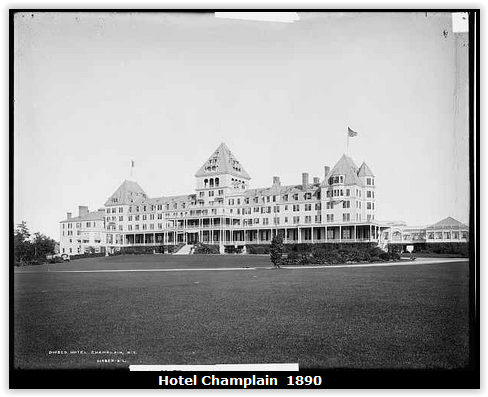 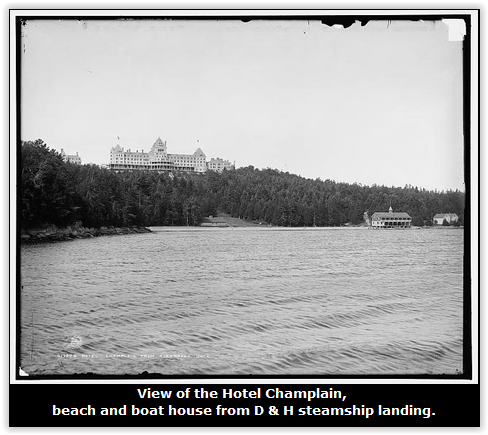 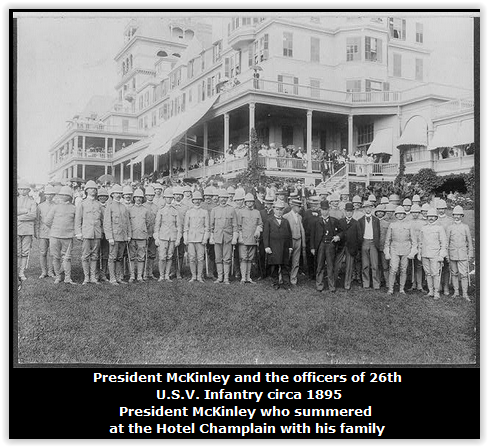 Nobody moaned about this president golfing, geesh, get over it!

Pepe,
Thanks for these pix, I love the modern and historical stuff!