The first trip on a ferry through the ice is pretty exciting, noisy and a little scary. Did I mention it was scary? We leave Plattsburgh, NY and berth on the Vermont side at Grand Isle. This saves at least an hour’s drive for us. 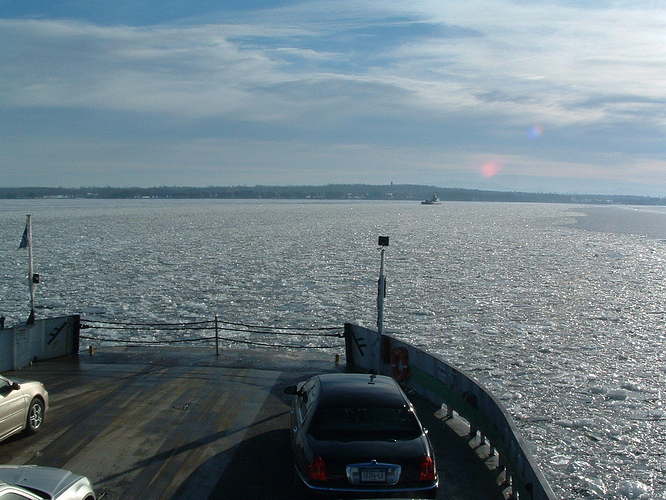 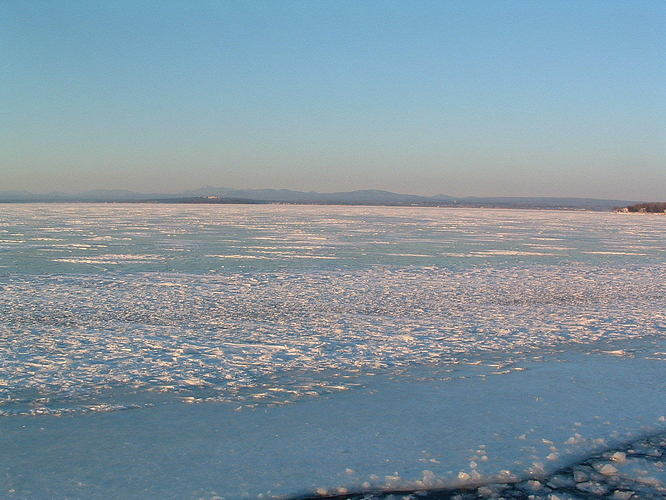 On the shoreline 0n the left you see a white building on a hill. This was a ritzy tourist spot in the old railroad days. It is now Clinton Community College. Directly behind it is Whiteface Mountain, the highest mountain in the Adirondack high peaks at 4867’. When you’re flying you can see it from Albany, NY, over 100 miles or more, a great navigation aid for pilots of small planes. 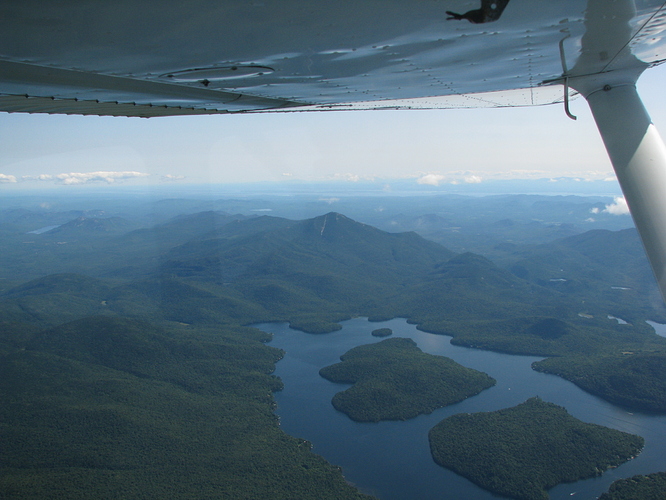 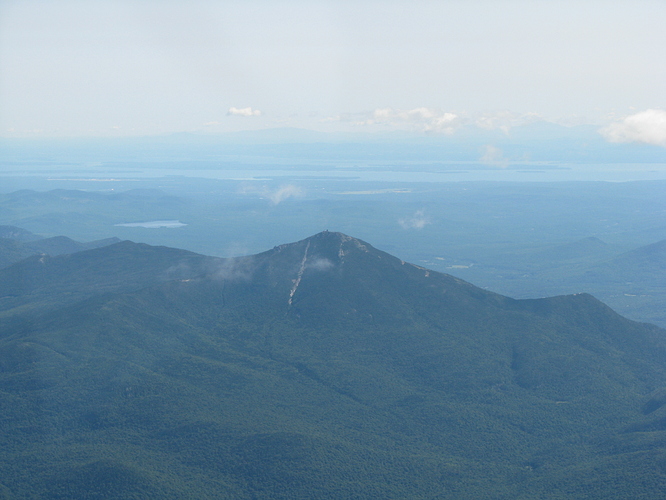 Found a pic of the entrance to the elevator shaft. Right through solid rock.

You can drive to within 267’ of the peak. Then you can walk/climb up a steep trail or take an elevator cut through solid rock to the top, not me! Ha,ha. I’d rather fall off the rocks than get stuck in an elevator! Lake Champlain is in the background. 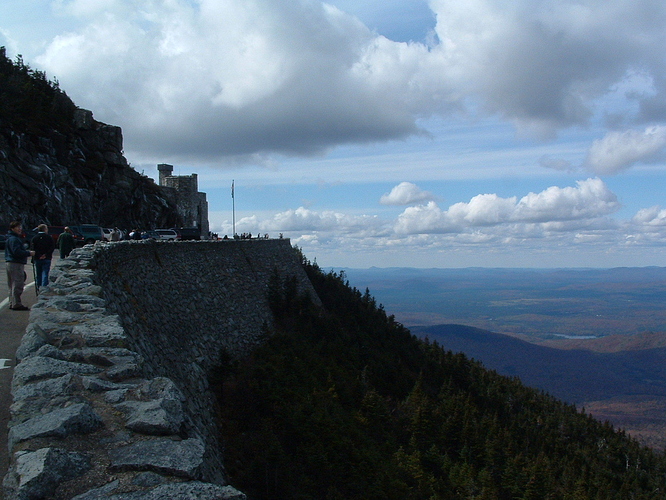 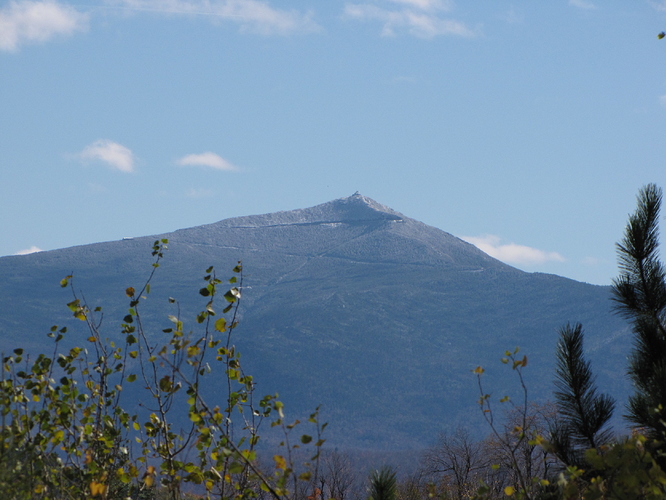 The view from route 3 looking easterly. 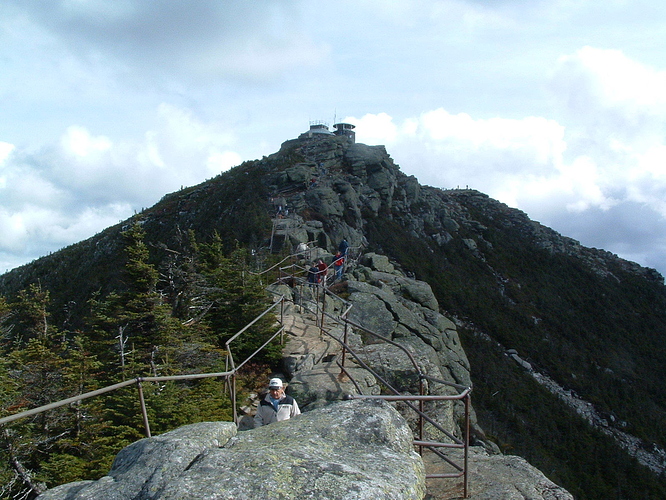 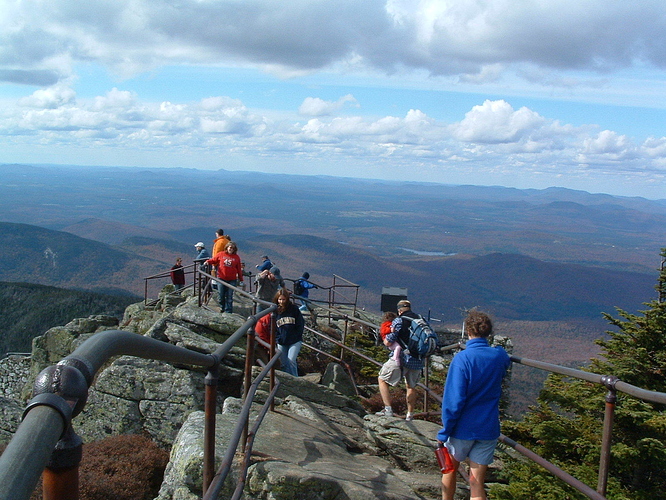 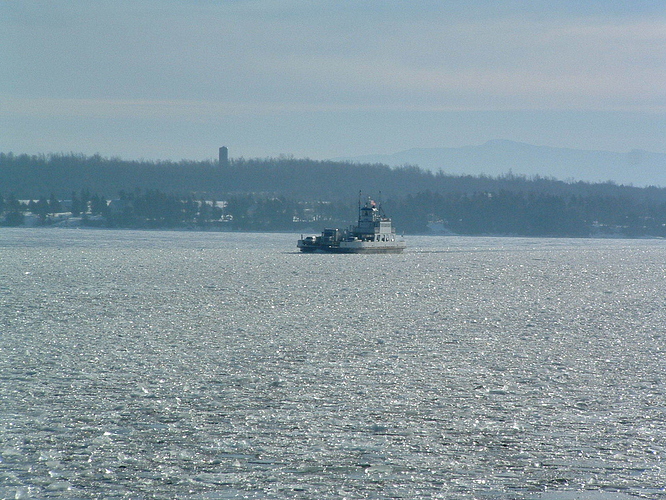 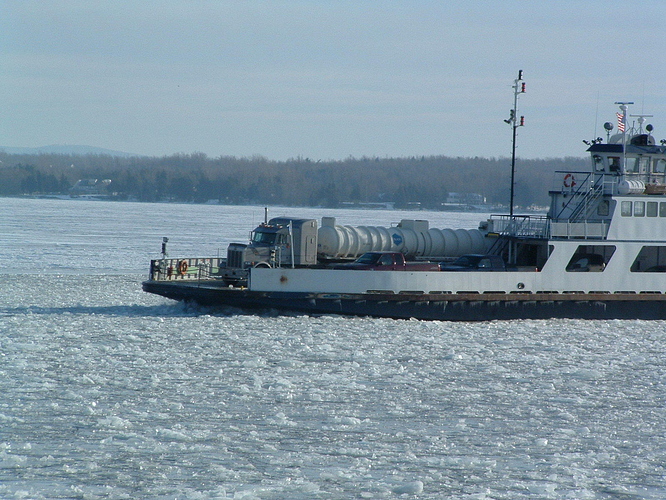 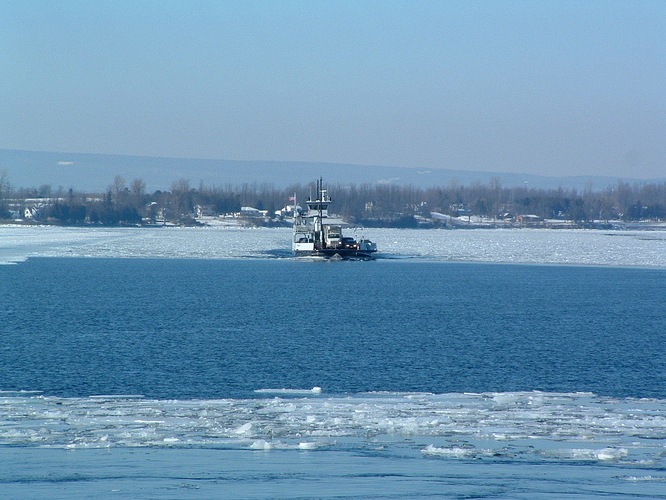 Approaching the Grand Isle dock. Hope you enjoyed the tour and a little taste of the beauty of the area I grew up in. Again I was blessed.
Pepe

Thanks for the pics! I live across the lake in VT. All that chunky ice must have been broken up in the south by the thaw we’re having. Wouldn’t it normally still be pretty open up your way? I can’t remember the last year the lake closed.

I went up with an 80 something year old friend in his Cessna 150 last fall. We flew down over Fort Ti and saw the remains of the Mt Independence bridge. Haven’t taken the ferry across in the winter since I think 66-67. Might be time to do it again.

Hi Dick,
Thanks for the comment, where about in Vermont are you? These are old pics, I haven’t been to the Lake this winter, not even Rouses Point. I’d have to guess with the mild weather that it’s pretty much open water.
Pepe

Great photos but that looks like a cold ride on the ice. Sometime I should make a trip over that way myself. Lived near the NH VT border but was never over in that part of VT.

I’m in Middlebury. I haven’t been out to look at the lake this year either. Folks on this site might not know that everything flows north! 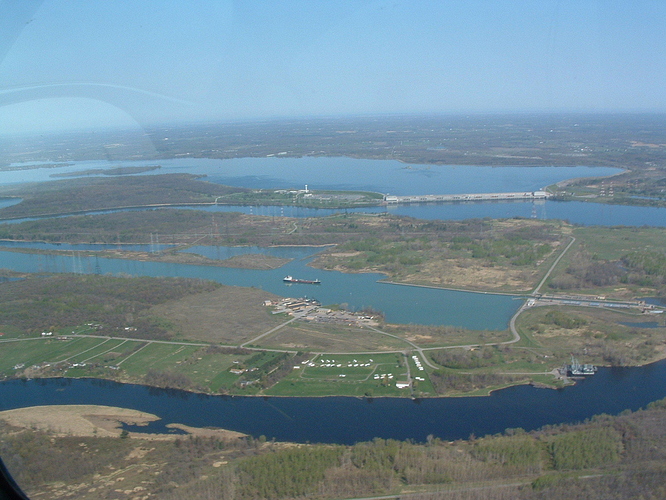 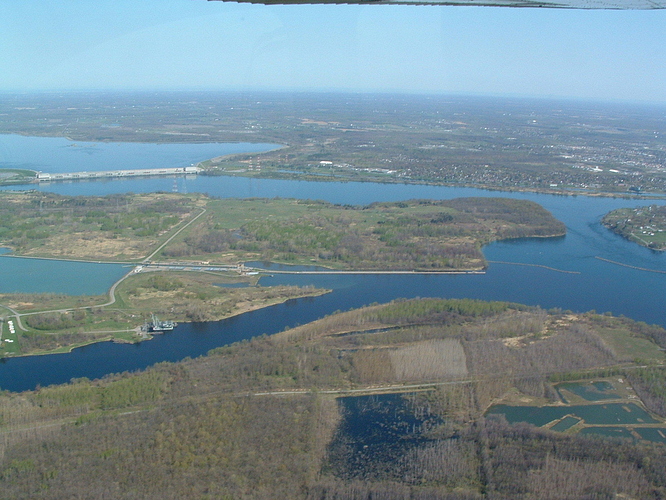 The Grass River(bottom) nearing the Snell lock, then flowing into the St. Lawrence. 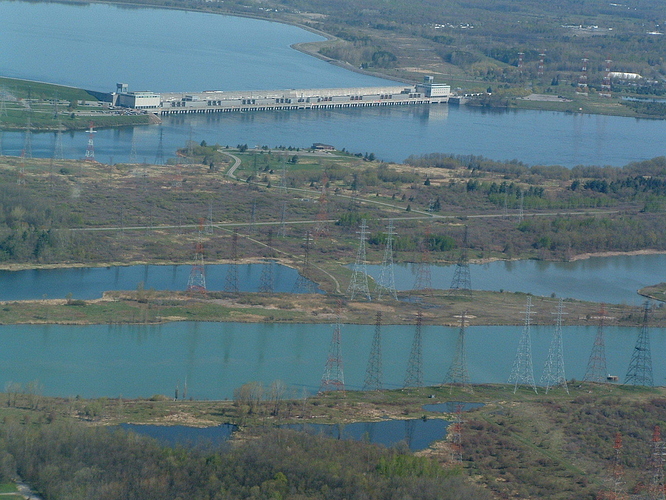 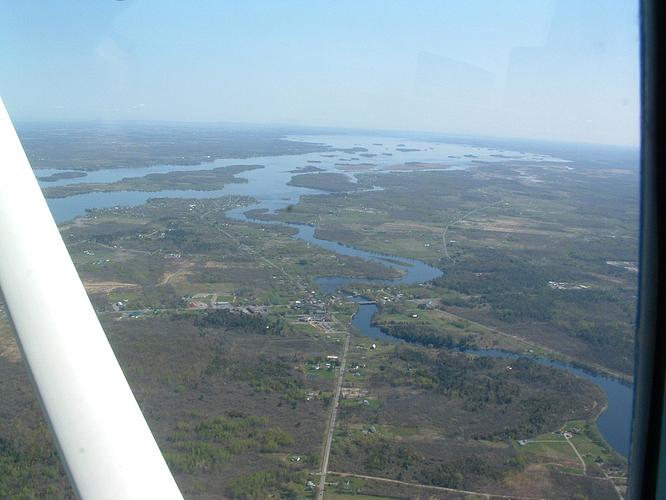 Raquette River entering the St. Lawrence(looking easterly). The St. Regis River can just be seen at the upper right in the pic. A few squiggley bits of water. 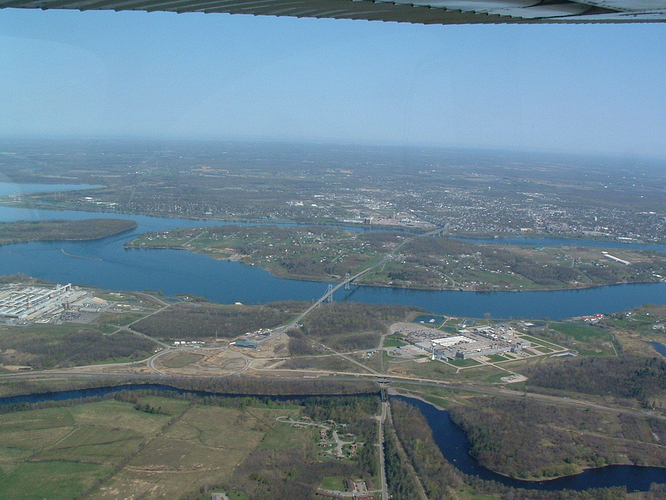 The Raquette River, the International Bridge to Canada, Cornwall Island and Cornwall, Ontario. 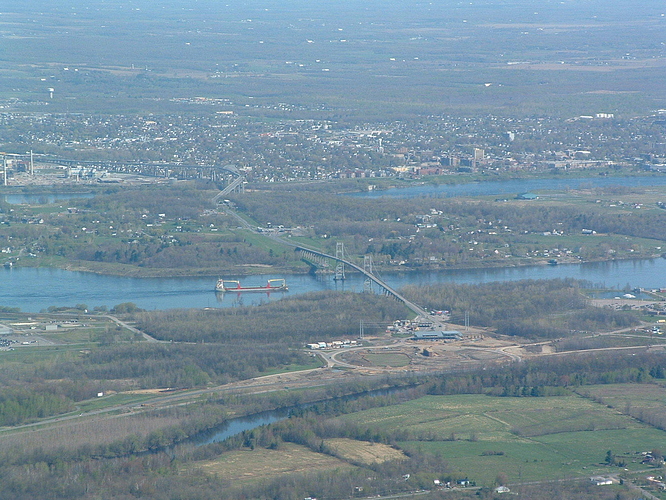 The southern edge of the St. Lawrence Valley. This completes the tour, what a great day to be PIC (pilot in command).
Pepe

The fish to catch, WALLEYE!
Bob

The Walleye is my favorite fish and fun to catch. My dad used to take me to a spot on the river where they congregated for spawning. He’d shine a flash light in the water to pick up the eyes. Man, what a thrill that was for a young kid! You never forget a sight like that.
Pepe

We call them pickerel up here, but the glowing eyes sure are striking. Premiere fish

Hi All,
We may be talking about 2 different fish. Here’s an illustration I found of both of the fish we caught in Tupper. Notice the difference of the eyes of the two. This is why I think we were watching walleye. Walleye was #1 for taste imo. The pickerel being the bonier of the 2, but tasty too. We always used wire leaders and needle nose pliers for these mouthfuls of teeth.
I was drift casting near shore when I cast next to a partly exposed boulder into about 6" of water. The lure hit the water and WHAM, a pickerel hit. He was lying right almost on shore waiting for an errant minnow, etc. That long slender body was built for lightning attacks. The fight was on and that was the day I learned about steel leaders. 2 seconds later the line was cut and the fish was gone. One disappointed kid 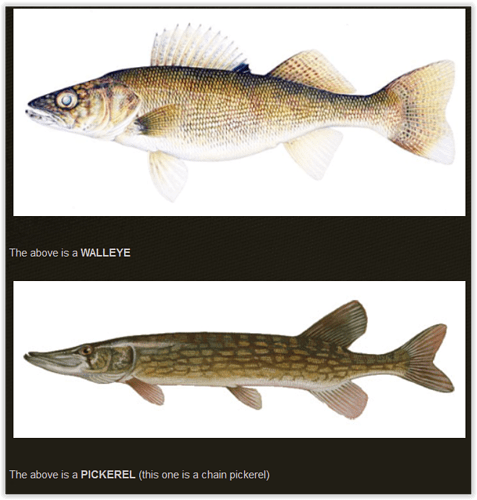 Up here we would call walleye pickerel. That’s the trouble with common names for fish. The second would be called pike, northern pike, or jackfish. There is a second variety of walleye, more slender but very similar flesh, called sauger here. Actually I think jackfish is better eating, but most disagree, due to the Y bones, and probably that they are so common and easy to catch.

Hi Garry,
I’ve heard of sauger, but never seen one. Northern pike I’ve heard of also, I’ve never caught one, but there are some in Tupper. Jackfish I’ve never heard of, but if you caught nothing it was jack#### 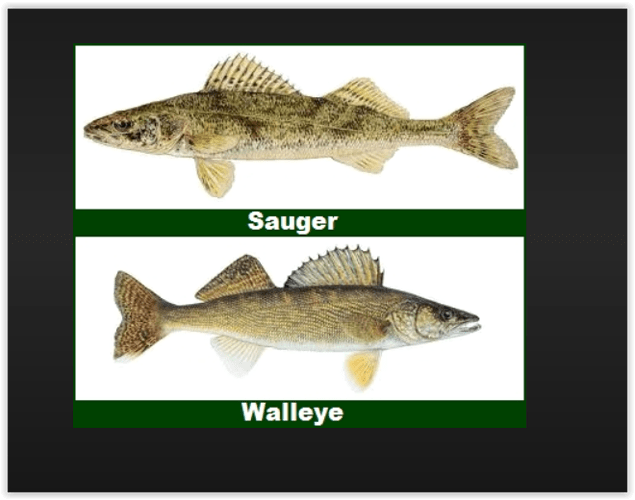 Just found this pic, boy the sauger and walleye are pretty similar. My Dad used to fish the deep parts of Tupper Lake for whitefish. He said you had to be careful reeling them in as they had a soft mouth. They were a real taste treat,too, as I recall. 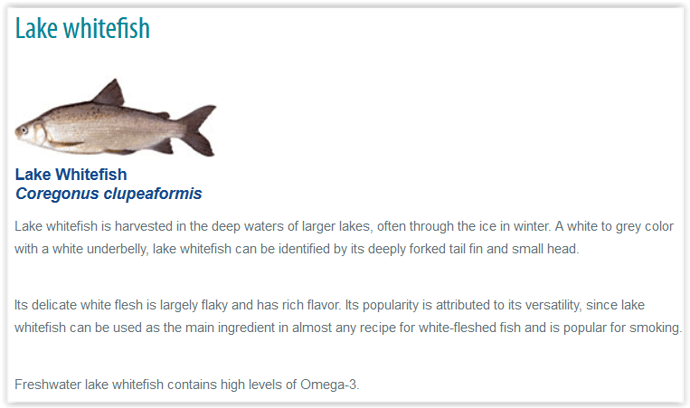 The whitefish are really good smoked or stuffed and baked. Easier to catch ice fishing. They do have quite soft mouths, commercially they are caught in nets. They can be seen on summer evenings when the water is calm feeding in schools in deeper water at the surface on little fallen bugs, but catching them on a lure then woud probably be like fly fishing. There are similar fish, tulibee which is small but can be quite aggressive on spinners just below the ice, and goldeye, considered to be the best smoked.

The Northern Pikes have been coming into the Columbia River for years now. The Dept. Of Wild Life Fish and Game. Do not want any fish like that in their Columbia River. Yes they think it belongs to them. Ha Ha. We have some of the biggest Walleye catches on record in the passed 20 years all the way to the mouth going into the ocean, also have sauger in the up part of the U.S.A. part of the river. They even crossbreed into saugeyes. This last year they have taken the limits off of these fish in the Clombia River. To save there precious Salomon. They can’t make any monies on those fish, but they make billions of dollars on salmon. More Globalism at work destroying us who just want to go out and go fishing.

Here in NYS the Northern Pike, Pickerel and Walleye cannot be fished between Mar 15 and the first sat in May to protect the propagation of the species. The rest of the year the daily limit is 5 of each. I personally wouldn’t trade my walleye or whitefish filet for a piece of salmon any day.

You are so right on Pepe. We also have some very large White fish in your lakes and many people fish for them though the ice or at ice out in boats in the deeper parts of the lakes 70 to 100 plus feet.
Bob

My dad told he measured the depth where he fished at 80 feet. As a kid I couldn’t believe our lake was even that deep.
Pepe

I can see why a department of fisheries would be concerned about pike. They are pretty aggressive, some call them “slough sharks”.

There’s a back country lake in Manitoba where we go to fish occasionally, many big pike in there. Very few ducks and loons, despite it being good habitat. This jawbone helps explain… 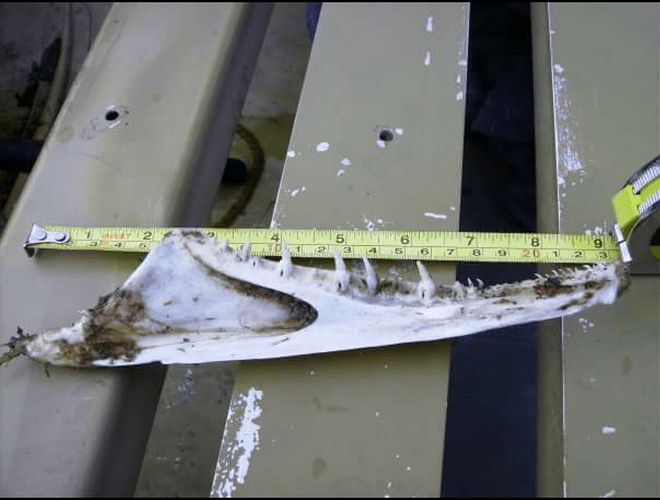 The picture makes the measurement look bigger, but 7 1/2" still makes the jawbone longer than most dogs. We found the jaw washed up in a bay, I don’t know if I would want to hook a fish that size. (Or try to get the hook out )…

And I definitely won’t be skinny dipping there!

Funny names for the same fish across the boarder.

Confusing, I know what a Pikerel is because I fish them all the time ( same as a Walleye uncommon name but some use it up here for the same fish. )
The other one Sauger is not something I have ever seen in the fished and not seen in the local waters but I know the name.

A pike is a norther pike or Pika ( depending on your ethnicity and how you butcher the language HA HA ).
Not to be confused with the Musky ( a trophy fish you get in trouble for confusing with a pike ).
You can eat them but they are bony.

The white fish is very much prized ( I like them smoked )

There is also the Burbot ( a sort of Cod like fish ) and my brother calls that a ling.

Bass are not native where I live and the are eating the other game fish as they move north.
Small mouth first and large mouth behind them.
I don’t mind eating them, and the large mouth are a recent novelty to me since I never fished them before 2013.

When I was young I used to get on the bus with my fishing rod and head down town.
Right in the centre of the city is a nice lake that has always produced nice fish.
I would cast a few, watch the girls, walk up and down the quay between the science centre and the park.
Maybe even swim before heading off to work or the girl friends house.
My son does now too, and its nice to see there are still some free simple pleasures for kids.