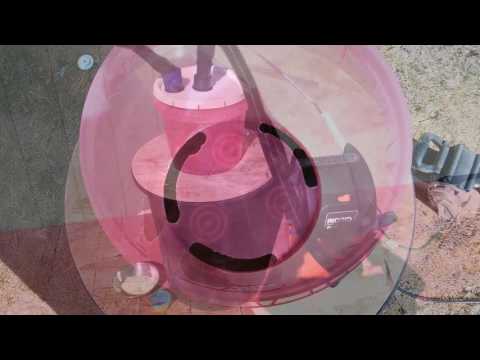 I was impressed by how simple this lady made these cyclones. I thought it would be so easy to duplicate her methods for wood gas.

Thats really cool with the cut outs in Semi-Thein-Clone. I can easily adopt this in our current design. The current design works quite well as is, but always room to improve things. My take on forming actual cones vs just a straight tube is I have not seen any difference from one design to the other. At the bottom of a straight tube cyclonic filter it needs to be stepped out at the bottom or put a baffle in like she did. This will create a barrier once the particles get bast this step. As they will be whipped outward and can not get back up.

Great video, yeah dont put to much effort into forming cones. The first few years we suffered through beating our heads against the wall, making those stupid things. Later tried a straight tube with step like mentioned and it worked just as well.

This is what we are doing now, I no longer use any media filter material once so ever in the machines. It only clogs up, makes a mess, hard to dispose of and creates more issues that its worth. The vessel that is normally considered a media filter on our system, is still in place; however, we consider this a condenser. It must not have any mass in it in order for the gas to expand to drop moisture. It is more effective without anything in it, then it is with. We now use a series cyclonic filtering system on high end machine and this is post intake air metering. This creates a presure drop and aids in cooling the gas in this filtering process. If the machine is making tar you usually will not see it until it hits atmosphere. (coming out your flare tube or just after intake air metering). So filters are basically useless in a vacuum environment, as its mostly still in gas form because its under vacuum presure. On the TOG Utility we are limited to just one due space constraints. But so far I have seen very good results far better filtering than any media system. On the Evolution there are three of these in series and then we use a normal air cleaner at the carb. So if the machine is making excesive tar it will clog this thing up in a heart beat and stop the head aches before bad things happen. When things are running good this filter will stay clean.

Thanks Mart hale for bringing the cycone too point, i hadent considered a strait pipe till now.

Thanks for sharing your cylone info Matt. I have a 2.5 Feet space for cyclone tall, and i wonder how far down should i put my strait pipe? And are you useing the hay filter as a cylone or juse as it was with out the media.

No I do not use the hay fitler as a cyclone this is totally a separate process. Its simply a vessel to allow the gas to expand. Study AC systems and the condensing process this is what that aluminum canister is for under the hood. The coarse cyclone is long before this, it is the filter for your filter and generally place before your gas cooler. This keeps dust out of the sticky coolant tubes so to keep build up as minimal as possible. Later in the system after the gas has exited the gasifeir system it is then brought to our fuel mixer and then a bank of cyclonic filters and then to the engine. You want your cyclones as small as you can get away with; you want as much velocity as possible. But yet your system still needs to be able to breath.

Sounds interesting Matt Rider, and like you have it all worked out. Are you reheating your gas in the cylones just before the paper filter, or is the media condencer container getting rid of that much moisture.Those cylones must really be working too run without a media filter.Thanks Matt for shareing about the cyclones, i will build mine like that after a WK heat exchanger.

So Matt, if l get this right, you cyclone your gas/air mix? Is this better thain cycloning pure gas?

I had been thinking of something similar for a while, combine a scrubber with a cyclone, but l never thod it wuld work so well with just moist gas!

The cyclones get it out, nothing stands a chance once you drop presure. If you are still making dirty gas after this filter then something is wrong and needs to be addressed.Use a K and N type filter you can clean them if they get fouled.

Yes exactly, you need the presure drop and with the added air incoming it help cool the gas more. You need at least two cyclones, I will most likely go to four of them in the future

I have not had an issue with flash backs. Ive never seen one during an engine run. But if this is a concern just use snug fitting hoses but dont use clamps on them. If the unlikely flashback occurs it will blow the hoses off.

Anyone that wants to experiment with this try it both way with just the gas going through and then with the intake air mixed in. You will see much more drop out with the later and especially tar.

The way I understand cyclones is that there are two vortexes during operation. The outer vortex spins in one direction and the inner vortex spins in the opposite direction. This tells me that there is a point at the exact time of the change in direction when movement of air actually stops for a microsecond. Seems to me that a lot of fine particles could drop out at that point.

I dont think thats how they work, I could be wrong but I dont the direction changes. but here is something to think about. A cyclone will work 100% better under positive presure vs a vacuum. Think of the flows inside as a spring. When you compress the spring ( pressurized) the pitch changes more revolutions in a given length and then if you stretch the spring (vacuum presure) you then get a coarse pitch with less revolutions.

The thinking is almost correct, be it that the particles are exposed to centrifugal forces due to their mass and the air is influenced more by the provoked centripetal forces due to its weight.

The spinning direction is the same, the outer core from the vortex having a higher velocity then the inner core, so the particles are prone to follow their mass/velocity/gravity forces.

The smaller the particle, the more airspeed is needed at the outer circumference from the vortex and the less airspeed at the outtake pipe, the lighter particle does need a longer distance to go down and settle.

The thing that grabbed me most about this video was the testing method. Being able to see exactly what is happening in the chamber and to see different particle sizes if they are stopped I think is one of the greatest steps forward I see in the video given.

If you are using wood with moisture that would indeed dictate that you would have to do something with the tar, but for my setup with charcoal as the starting point, I do believe a deep pipe sure would clean up the output to the engine.

I am thinking that instead of testing with the engine that one could introduce fine ash into the system and test the final result with a shop vac.

For me the theory is great as to how the vortex works, but to see zero dust on the filter for an output would be the proof of the pudding for me.

Yup that is exactly how we tested in the beginning.

You guys are right. I re read the explanation and it said that when the vortex reaches the bottom of the cyclone it “changes direction”. I thought that meant rotation direction but it really meant up and down direction.

Just to add my two cents worth. I too have experimented with clear cylinders. Straight cylinders work great. Seeing is believing. Two “vortices” can be observed simultaneously: one cylindrical following the outer shell and one cone shaped. I use a center hole at the bottom passing into a collection chamber which keeps the point of the inner vortex from stirring up the accumulating particles. The stuff that accumulates where cylinder wall meets the bottom is drawn down into this hole by the inner vortex.Rules of thumb are height 3X the diameter, and diameter 3X the gas pipe diameter. 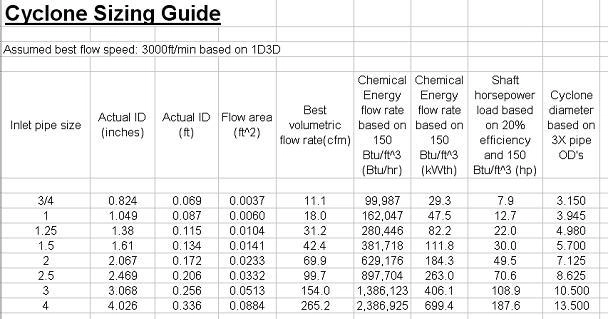 Lots of knowlidge and experiances in the last few posts! Like where this is goeing.

I tested my cyclone before asembly, with a shopvac and ash, to be 95% effective. But its hard to judge actual gasflow.

A question thugh. Once woodgas above dewpoint meets the 60% humid air, the humidity of the mix shuld fall considerably. But it is not lost, its just not in a liquid state anymore. Does this gaseous water not dilute gas?

Thats a good question on the humidity I cant answer that. But would assume your assessment is on point. But how much does this affect it I have no idea.

Positive presure is safer than a vacuum. A positive presure system will push the gas out of a leak vs a vacuum sucking air in through a leak. However, if you have a blower placed mid stream then any point before this blower can become an issue. I dont see why it would really be any different though; if air were in the gas via positive or negative presure you get a bang either way

This was why when I pressured my systems it done at the intake so 100% positive presure. It is practically impossible for a flashback to occur this way. But I had problems with my lids unable to seal so I abandoned this. I had planned to use a turbo to pressurize the gasifier in the future and still may experiment with that. I have small turbo for these little engines its pretty cool.

Hi Bruce Southerland. If i read the chart rite. I have an 1 1\2" inlet then i think i need a 6" round can about 18" long plus the extra bottom compartment. ? And going. By the vidio the center drop pipe worked best 1/2 too 2/3. Down.Thanks too all responds.