A video showing a woodgas generator with a water scrubber running a vertical shaft lawnmower engine driving an automobile alternator putting out up to 900 watts (12 volts at 70 amps…maybe 840 watts, max?). Uses LPG tanks with flanges that appear to have been made with an angle grinder. The air mixer for the engine has a plastic line running to the fresh air inlet. Could this be for priming/starting the engine on gasoline? (at 7:15) Is the flat disc item an air filter? There is a water pump in the bucket under the scrubber that sprays water in two locations. (Into the downward sloping inlet pipe to the scrubber, and also just above the midpoint of the scrubber.) The top of the scrubber holds wood shavings, and the bottom has either rocks or hard charcoal? It looks like the water in the bucket is an airlock/seal. Overall neat job. Perhaps could have used that frame as a cooler if the pipe size were just a bit larger, but then with the scrubber perhaps so much cooling is not required, especially for a single cylinder lawnmower engine? Also, an interesting blower modification. I don’t read Czech…maybe Mr. Unruh does?
Here is the link: http://www.youtube.com/watch?v=1u7s3P1vIOM
Uploaded by Jarykcz1 on Sep 25, 2010 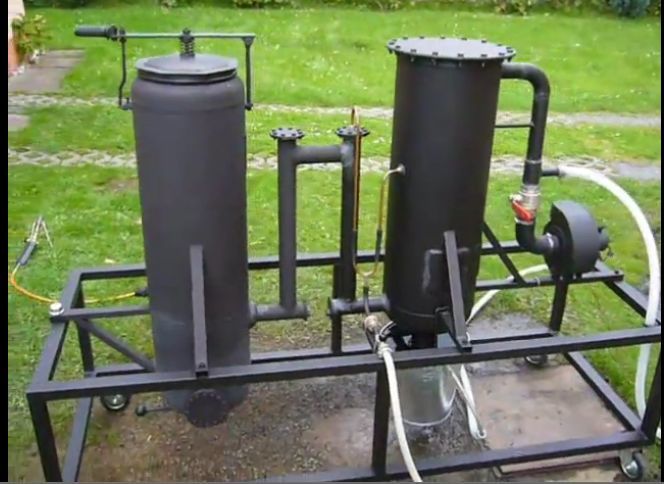 Hi RayM
Sorry. No Czeck here.
Thanks for the still picture and good detail expaliantion. YouTube is only possible to me after midnight. Wife objects to that greatly.
Yes interesting the waterseal/ash catch bucket under the cooler/wash/filter.
Builder will learn his blower is in the wrong position when it drowns in condensate. Learned experience teaches ALL down piping must have a downward drain leg and drain valve or plug.
Curious to see if the auto alternator is beinng also vertical shaft mounted and driven; or the drive belt(s) 90 degree turned allowing normal horizontal shaft mounting?

Thanks for this
Steve Unruh

Alternator shaft is vertical. Photo attached. His blower (for suction) is after the filters and just before the engine. Maybe just uses it to start up the gasifier. I looked at a few of his other projects, and saw a charcoal gasifier hooked to the same engine. For that, he uses a center-feed input air nozzle, a restriction, a grate, and output gas taken from under a plate mounted at an angle. No water scrubber on that one, but he posted yet another video with some water injection experiments, where there was a dribble (drops) of water into the center feed air input nozzle. Water injection necessary because the fuel was entirely BBQ charcoal. One idea he had was to run the hot output gas through a gallon can containing water, and after the water (and the reactor) heated up, it would build enough pressure (steam??) to dribble into the center-feed air inlet. I wonder what would happen to a Wayne Keith gasifier system if only a sack of dry quarter-sized charcoal was tossed in, like for a ten mile trip? Again thanks for a still picture and explanation. YouTube did not co-operate last night.
I was a PNW regional Alternator/generator/starter rebuilder 1971 thru 1990. Not Supposed to operate these alternators vertical cause the radial load ball bearing are not designed for appreciable end/axial thrust. But . . . I know a few now who are doing this susessfully so far. Gonna" be doing it myself soon on with a couple of old brushless cast iron truck alternator driven by my new, 10 yo 17.5 hp (on gasoline) Kohler. The 6205-2rs tail shaft bearings in these can be changed out for an axial thrust 6205-2rs version.
Doing this RayM if you up size the engine a bit then you can opposite mount two alternators and virtually eliminate any side thrust wear problems in the engine too.

Straight charcoal in a Wayne System? I think he has addressed that in posts here and there in years past as overheating requiring water spray and having less engine power??
If you are a member of Gary Gilmore’s Charcoal Group he has talked some about using raw wood fuel dumped in on his charcoal gasifiers to cool a charcoal over heating condition. I think that is what Mr Wayne says has been doing now too.

You could run straight charcoal if you had to but one critical change needed - add a variable amount of exhaust to the intake air. This will keep temps under control by turning excess heat into fuel.

Honestly though, when you have a Keith gasifier why run anything but wood? Cheaper/easier to make your charcoal as you drive.