Thanks Jim, I am getting it ready to take it to a steam and gas show tomorrow and Saturday along with the Tracker. I found that the governor was out of adjustment and it would not make 3600 rpm. That is why I could not keep up with Andy’s tractor at Argos.

Got rained out at the steam and gas show today (Saturday) so I left early. I had a good time Friday showing the Tracker and lawn tractor to many very interested people.
I found an old cast iron burner that I hooked up to my flare discharge just to see what would happen. This happened . . . . 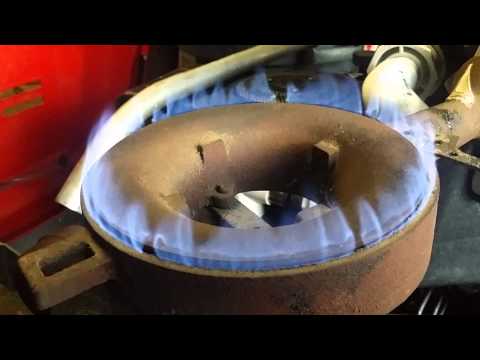 I like the burner Don, even a new zero turn won’t cook lunch. I have not played with charcoal all summer. that will change as soon as I get my mobile WK retort up and running.

That’s something to write home about! Sweet!

I snitched 7 wide cap 2 1/2 gallon plastic jugs out of the recycle bins to use for storing and refilling the fuel for my charcoal lawn tractor. This will make for fast, clean and easy fill ups with just about the right amount of charcoal using 2 jugs at a time. I think they originally held kitty litter. (notice my mower deck? - not hooked up yet.)

Pretty handy, Don. Do you need a particulate mask when refilling?

Not if the wind is right

I lost my governor spring and the one I found in my box of springs would only give me 2600 rpm so I ordered the correct one and now she really goes! I have a belt driven generator that needs 3600 rpm or I could use step up pulleys but I would like to milk out all the power I can. In trying this out I got this beautiful flare that I just had to video! 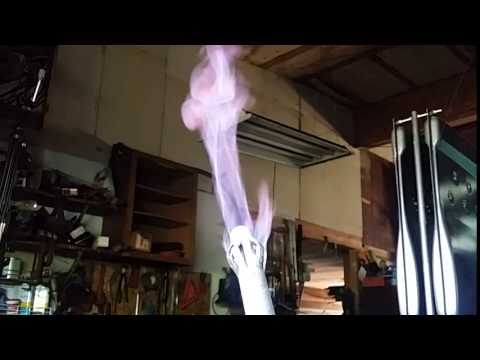 Realy a very nice build. i envy you…

That is a nice build. Rectangular is the way to go for space and looks on a small tractor.

My throttle had been seized up due to the corrosive action of char gas for a while so I did not run the tractor for a couple of years. Now that I had a little more time, I played with it a bit. Since I do not run it on gasoline anyway I cut the carburetor in half down the center of the venturi and drilled it out to 1 inch so there is no restriction anymore. Then I heated and tapped and soaked the throttle bearing shaft until it was free again. Now it is hooked back up with another inner tube vibration free fitting and is ready to run again. 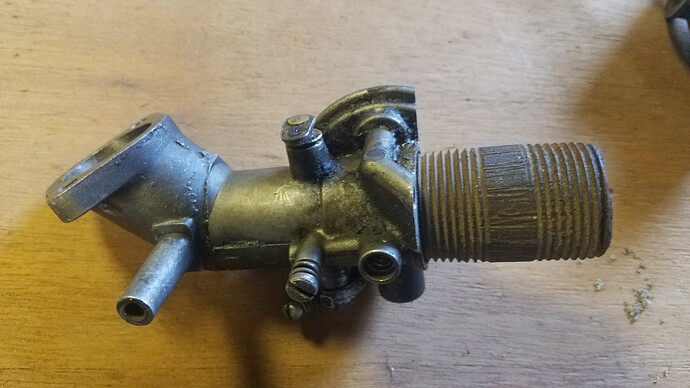 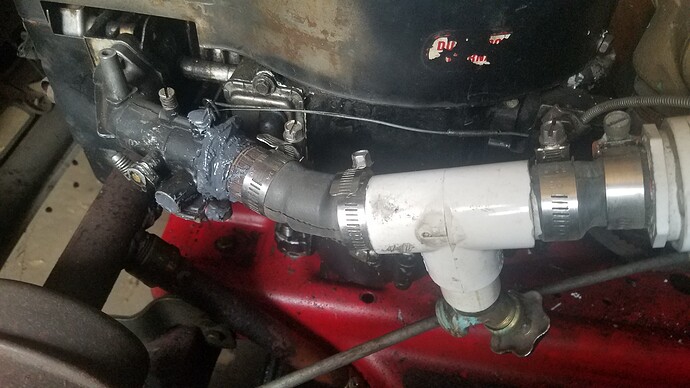 Don, you will have more power now. Careful with the clutch. You never know what can happen

The more I read on this forum, the wheels keep turning for more ideas. I have a old weed eater brand riding mower that just sits around…mobilized to feed genset for power outages…pto for snow plow…thanks for this read Donn, you really got the old thinker tickin along right now

Yes. Exactly MarcusN.
You options abound if you just make-it-so.

I keep two J.D. branded worn out rider mowers here too.
The Kohler Command 17.5 hp singles are still o.k. runnable.
Then I have two old Ford pick up trucks still 99% intact.
Now with the V-belts; mower deck and pulleys off the old riders.
The truck alternators, wiring and regulators.
THEN add in another full Ford pickup take-off charging systems wiring and all . . . . another take off alternator (now re-brushed) from the Wife’s old Hyundai and I could have 4000 watts of 12vdc.
Add in in a couple of $100. USD 1000 watt inverters; a couple of vehicle batteries . . . then have 2000 watts, four outlets, of full wave, electronics safe 115 VAC too.
And do this no-weld, hand tools only, using wood for the systems mounting.

And never yet touching the three running vehicles here, or the newer V-Twin rider mower.

The inputs being you own ingenuity; and keeping one of those old lawn mower engines fuel fed and happy.
S.U.

Don, you will have more power now.

You are right again JO. I ran it yesterday and could not believe how strong it throttled up! Another thing that amazed me is how after nearly three years of inactivity, the charcoal that was left in the hopper fired right up as if I just put it in. That is why I plan to build a downdraft charcoal gasifier/generator for emergency power and will not have to worry about stale gasoline.
On another note, I did have to pull the head from the engine to free a stuck intake valve. (stuck open). Charcoal gas seems to be very corrosive as both the carb throttle and the intake valve were stuck. Seeing I don’t use gasoline at all, I can’t use it at shutdown so I am looking for suggestions of some kind of spray to introduce to the engine air intake valve to coat the intake parts when I shut it down. Some kind of aerosol would be best I think. Any ideas?

Well, start with trying branded WD40.
If it give the results you want, then stick with that.

Others out there. Higher costs . . . defiantly leave silicone and/or teflon residues. Or are too reactive with ammonia and such.
See the in-engine WD40 here and see the left behind minor residue:

I remember at one time, Matt R was talking about drilling a gease passage to the valve stems to give a shot at. Shutdown.

Engines on motor boats are easily preserve with a rich mixture of oil and petrol, which you inject during operation to suffocate the engine.

Just a thought, what oil are you running in the mower? With all this new “low emisions” oil being produced I have seen engine life shortened. In turn the auto manufactures have tightened tolerances on engines where once 30wt oil was standard to now needing 0-20wt full synthetic to maintain a manufactures warranty. I don’t agree with the green movement in this aspect, but quality oil additives such as power punch or Lucas oil additive have had a lasting affect on miled out engines I have brought back from the grave. My usual for all highmilage engines is to replace one qt of oil with a oil additive at every oil change. Many years of playing with small motors (mowers, weed eaters,boat motors,gensets,compressors,welders,and equipment have a nasty habit of following me home) I have discovered most small engines don’t seem to care what is put in them from 15-40wt up to 10-30, but I have grenadeded several mower engines trying to switch them to a synthetic oil. I’m curiose if a oil stabilizer would provide adequate protection at critical components such as valve stem seals and seats to prevent the corrosive action of char gas. Or if maybe a “event cleaning” as Wayne describes it of lighting the intake would burn off enough of the corrosives to prevent seizure and damage if enough deposits are made to set fire to it. Another thought would be a simple gas drip into the intake just like Gary’s oil drip feeder into the fire lobe, just placed to run straight into the motor as a cleaner on shutdown. Could even let a ventury effect happen over a bottle of gas as a vaporizer and hybrid the motor for shutdowns