Haha, you have to watch this little 5 year old boy driving a front loader 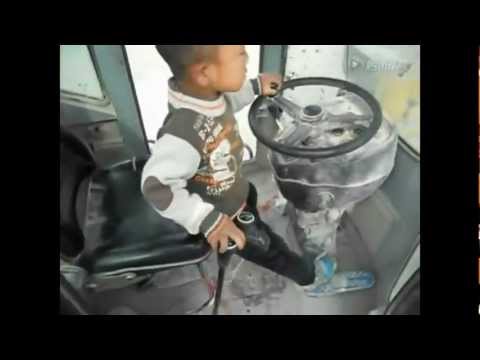 I gave him a thumbs up, but WHOA!!!
I can’t be speechless about unsafe operation.
Most importantly, he didn’t look before backing several times.
Whatever else he did correctly, he (really you) flunks the test right there, dad!

Yes, I guess there’s a reason you need to be slightly older to have your license

I have a cousin who drove a loader like that at 5. Not saying it’s right. But if nobody is in harm’s way (exercising their good judgement ), should be ok. Amazing though.

I had my little guy driving a small ATV at 5, he could also drive my lawn tractor.
But they are so small at that age and one slip up could mean they fall out of the machine they are trying to operate.

That reminds me of when the man who now rents my land was that age, his dad allowed him to run the haybine (self propelled hay mower) by himself. I thought it was cute with him sitting there feet swinging in the air because they wouldn’t touch the floor. Then the machine got plugged and I saw him climb off and start working on the machine while the engine was running. Nothing bad happened and he got it fixed and back running. That is when most farm accidents happen, when someone is in the field working on equipment. As I said, HE is now renting my land. TomC

Yes, and you can tell he is starting to get a bit cocky and careless. OK, drive it, but not unsupervised. He still needs some coaching about safe operation of that beast, not entirely tamed.

You can’t coach a kid to be safe.
At that age they lack the mental faculties to see the consequences of action.

They have to hurt themselves to learn a lesson.
My boy drove that ATV like a terrorist until that black day he rolled it in a tight turn.
Not hurt but wised up fast.
No amount of talk would have drove that point home.

Now that much said I wish my brain had the kind of elasticity of a small child.
The speed they can learn a skill if they want to that is…
Imagine what you could do with your time knowing what you know as a grown up with the boundless energy and ability to learn of a child …

At that age they lack the mental faculties to see the consequences of action.

That is funny!
But with a sigh, because at least kids grow up…

As they were growing up, I let the 4 girls steer while siting on my lap. Little kids have no conception of death. While driving along a narrow street, Bree yanked the steering wheel hard right. I’m sure that she had done the same in video games.
But, life isn’t a video game. my sister asked me to teach her 18 y.o. son to drive. She couldn’t handle it. He was GREAT at video games. While driving over a 2 lane narrow windy pass, he was often in the oncoming lane. I looked out my window and saw the double yellow line. He just didn’t seem to get it. On a very slow drive through a park, he slammed head on into a barrier. I had told him that he was driving too fast. He didn’t listen. In video games, you just push “reset” when you crash. Kids have to believe in death before they get cautious.