These EMT compression couplings are available locally here at $5 for 2 inch and $10 for 3 inch. EMT pipe. I wonder what it would take to make these connections gas tight? I have a tube of that runny silicone glue for gluing stove rope seals that says it is good for 2000 deg F. What do you guys think. Is this worth a try? 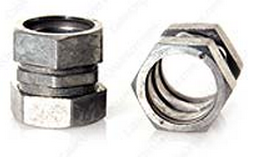 Hi Don,
I tried em earlier on in my woodgas days, They work well when new but in the long term use I would say no good. The joints begin to work
putting slop and play in the system causing leaks. Silicone will fill them but you have lost all ability to disassemble and reassemble the system quickly. Also I can make a homemade version for about $0.02 Sean
Video below with them being used.
Man this video cracks me up. My first gasifier ever build no gas welding in this video all flux core notice all the silicone joints to seal leaks.
None the less we made it work!!!

Hi Sean,
When you said " Also I can make a homemade version for about $0.02
Video below with them being used", were you using the 2 cent version or the EMT couplings in the video? It looked to me like the couplings. If so what are the 2 cent versions like? Thanks
Don M

Hi Don M,
Yep sorry I didn’t mean to confuse In the video the emt couplings were being used. Here is a pic. of the homemade version on the ranger.
I take a piece of 20ga. steel and use the pipe for a form to roll out a coupling and weld the seam shut. then the no.2 metallic silicone for a seal
works every time. HWWT Sean