Hey charcoal guys, this one’s for you. Maybe charcoal will be more popular if we call it “EnvirAnized Biofuel”? I think that’s all this is.

"Kingsport, Tennessee based clean energy technology company, EnviraCarbon, is to commercialise its patented and proprietary technology which molecularly alters renewable biomass feedstock, such as wood wastes into EnvirAnized Biofuel (EBF).
"According to the company the EBF is a product which looks, stores, transports, pulverizes and burns like coal, while avoiding the pollution associated with burning coal.
"EnviraCarbon claimed that its superfast process changes woody biomass into clean carbonized EBF, drastically condensing a process which took nature 100 million years to accomplish into a matter of minutes.
"The company added that because its process forces biomass to take on the physical characteristics of coal it can be directly used by coal-burning or biomass fired power plants and industrial facilities without any modification or retrofitting to their existing boiler systems.
"The ability to use EBF interchangeably with coal or biomass eliminates the need for coal burning facilities to spend the billions of dollars in capital expenditures necessary for compliance, according to EnviraCarbon.
"The developer of the technology added that EBF has the same heat value as bituminous coal from the eastern U.S. (12,000+ BTUs), exhibits a much greater heat value than wood pellets, and unlike wood pellets, is hydrophobic.
"The product is claimed to contain negligible amounts of sulfur and non-detectable levels of mercury, arsenic, and lead which are toxic elements found in coal. By most standards, the company said that EBY can be considered either carbon neutral, or near to.
"According to the company, its facilities use only waste wood, or certified sustainable biomass as feedstock, making them environmentally friendly, and require a relatively small footprint to produce large quantities of EBF. 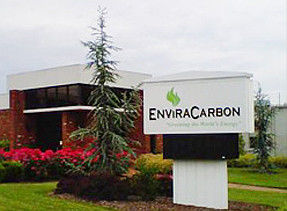 “Requires a small footprint to produce large quantities” I can just imagine a large steel building loaded with Gary’s 2 barrel kilns pumping out “EBF” (ridiculous name). Next thing you know we will be violating someone’s patent for making charcoal… (that’s mostly a joke). Hopefully its not burning up too much grant money in the process. Since it says it is Hydrophobic can it be charcoal? Maybe Torrified wood?
Thanks Chris…

From what I’m reading, I agree with David B. I think it is more likely Torrified Wood (biomass).