Hey everyone, my Lotos plasma cutter stopped working this week with the macro checks of 220 volts into it, good ground, new tips, clean metal to cut, air projecting out when triggered, fan blowing, but no even small amount of arcing available. My dilemma is that when I DMM the flexible wand length into the plasma head from the panel for continuity/resistance, I get 21 meg ohm. Should it be less than 10 ohm as I have no spec for normal? Even Don M. has to open his machine’s case to give me a comparison, so I thought I would open question this. What would you say is normal?
Thanks, Doug

I sold mine to a guy on here, I cant remember who it was now. But mine had a similar problem I shipped it UPS and when he got it he could not make it stop working. So just send to your self UPS it should work again. lol

21 Meg sounds high to me but not familiar with the lotus agree seems closer to ten sounds better. Is it touch to or pull the trigger and go

HI doug drost,are you looking for resistances of the air hose cable.if so i can check my 70 amp lotos ,it probbly close too the 50 amp models,my cable is 17 feet.I sure wish they had a repair manual for these machines. Allso youtube how a plasma cutter works, It might be cheaper too buy a same type sale model and use it for testing references too repair. PS I just tested the resistance of the torch cable off the machine and it has zero ohms, l just checked a spark plug wire off my old tracker engine, with my meter and it read .008M ohms and 8.2 ohms on regular no k ohms. so i havent checked and my meter could be out of range.i know i charged my my ohms meter before by accident.

Hi Kevin, I have a 10 foot flexible and am checking with the wand assembly hooked up still with one of my DMM probes onto the outside of the wand hose copper OD at the panel and into the wand head end. The micro switch trigger continuity works great.

HI Doug how do all the caps look,if one is swelled up it is probley bad,allso you may have too start pulling componets one at a time and test,unless you can test some componets on the board, Those caps were the hotest componets that i checked with a inferred temp probe when i first got mine i ran it steady and then checked for hot spots.You may be able too find open in circuit,either by meter or re soldering the board, some times the parts dont get a very good solder joint and loose contact under load.You can call the CO. and they should be able too help find a probable bad part,might be a relay Good luck man hope you can find the link. I think they sell boards individually.

I see one broke lotos on ebay still there, It may be broke same place yours is,Sorry too here yours is broke already since i have a lotos too.At least it aint one of them 900.00$ washers two years later or 1600 dollar friges smoked out 2 two years lator, Warrentees are not too swift for what they charge the americas. Please keep us posted when you find the problem,Thanks

I know little about welding or plasma cutting but have a fairly good electronics background. With the voltage/current you need, even k ohms would be extreme. Mega-ohms is out of the question. Even 10 ohms sound high for the wand. You have some sort of an open circuit. While you gave brand name, you did not give a model. Does that wand have a built in fuse of sorts. Also, you might wish to look at all connections in that wand. Something has undoubtedly opened. Have you looked at it for signs of heat damage where it may have arced open your wand itself.

All of the Chinese based units at this level has similar electronic architecture, using MOSFET outputs. These transistors are good at first, but tend to fry after about 50 hours of use. I own 2 Everlast plasma cutters, one MOSFET 50 amp and one IGBT 80 amp.

If you like to tinker, I have a cross reference to upgrade your MOSFET to IGBT. I have not done this yet, but will in future. Supposed to be a direct replacement without need of additional boards. That being said, looking at the quality of the cut and the durability of my IGBT, I would never recommend any of the MOSFET units. You will ultimately replace it.

Hi brit,if i run intoo any problem with my plasma cutter I will contact you for part interchange.Mine has working V mosfets at this time.Thanks

I hope it’s ok to post stuff on-topic, but not related to the OP’s issue:

It turns on, but nothing happens when I hit the “weld” switch (no arc, no wire feed, no gas feed) and it acts like a previous problem I’d had with a corroded switch.

I cleaned the switch contacts: nothing.

I carefully “hotwired” switch wires: nothing.

The other end of the switch wires are inside my machine where I’m not comfortable messing with stuff.

Hi Brian H if it does it again i would UNPLUG the machine take cover off and check for any loose plug ins, that is a standard procedure,allso while it is working, move the mig lead around and see if it quits again,then it would be open wires in the mig lead.Good Luck PS just wear rubber gloves and be carefull not too touch the cap terminals,or related curcuits while checking for any loose connects.

Hey Brian I have one of those, had that same problem sounds like, turned out to be the loose conection on the plug-in cord end! Hope that helps!!

Hi doug drost, just wondered how long you used the lotos cutter before it malfunctioned,and if you got it fixed yet.Thanks

Hey Kevin, I found the problem to be in the wand cord. I tested from the cord panel nut to the head itself and found an open. Didn’t understand how the cord might have a proper resistance in which I would be barking up the wrong tree. So I chanced it and bought a $40 new wand. Arrived today and it measured perfect continuity. Tried it and what a blast! I think that my combo welder/ plasma arc/ tank/ 1949 tube type Willy’s rim cart rode over that wand a few times and can’t take the abuse that a mig wand can. Last Saturday I burned up 4 circular saw abrasive wheels. Might not do that again. 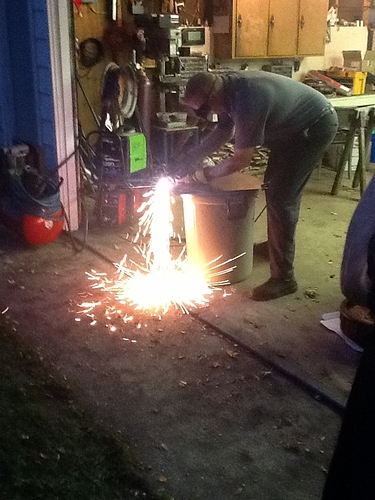 I can’t help but notice the fact that you seem to be cutting over a plastic garbage can. Have you ever had any “issues” (e.g. holey trash can/burning plastic slag puddles/fumes getting you dizzy) from it?

THANKS DOUG,Glad that was it,i heard that can be common problem at times.Them wands don’t feel none too over built.I keep my machine about 2,or 3 feet off the ground in a wooden box roll around,and that way it will help keep metal dust out of circuits,and from sparks.And set it on top my roll around when cutting too keep air moveing good.Sure beats the torch on speed for the 1/4" or less,i just havent got use to cutting with mine yet.

Hey Brian, that was a plastic trash can! After getting out of work I spent around 2 hours mowing up with the bag units the huge amount of leaves on the yard. Decided to quick try the newly UPS’ed wand and told the wife to snap a picture as the dark closed in. I’ll use it for real tomorrow on three layers of metal insulation through holes. I did forget that when I fire it up within 10 feet of the atomic clock on that far wall, it resets to 3am and irritates me for just the rest of the day.