Newbie. On the air fan is the negative side preferred, or the positive air inlet? Also how many CFM’s are needed? 4" reduction port, 20-35 horse engine. Would a boat bilge air blower work?

Good Morning Mr. McNeill and welcome to the site.

The bilge blowers seem to work OK for the price . Below is a section devoted to the blowers and how to cut them down if necessary and building the check valves needed .

Looks like I’ll join the club, get the book, and have access. I keep getting a access denied code. I built a prototype and fired it last night. My problem is I made a vacuum type blower with an compressed air hose coming off of the “gas out” port, but couldn’t get a flare. As soon as I put the air hose in the “air in” port it flared right up. I’m guessing by trying to get a vacuum I have introduced too much air vs gas and leaned it down.

Thanks for the advise, I’ll get the book, and the better membership.

Wayne: While you do have your own designed modifications for the blowers/valves, I’m not sure if I would consider them to be part of the inherant “WK Gasifer Design”. If you are willing, I believe that unlocking the Blowers page would have a larger “benefit to the greater Woodgas community” than it does “losing details of the Wayne Keith ™ system”, if that makes sense. By all means, keep a link in the Premium side, but I believe that the WK system would work just as well with any comparable blowers/valves, correct?

I’ve always pulled on our small gasser with a very inexpensive shop vac… I think we paid 30.00 for ours… I know it pulls way harder than our little engine does

If you add a speed controller to your shop vac you can slow it down. I bought one on Ebay for a few dollars from China, it was able to handle 3 amps at 240 volts, If you search ebay for "scr electronic speed controller " it will put you close to what you need. After fitting you can run your shop vac at any speed you want.

PD, Don’t attempt this with a domestic vacuum cleaner as the moisture in the gas will either burn out the motor or worse still cause an electrical shock danger.

we use a light dimmer sometimes, pulling hard gets it up to temp. quick so i don’t need to run it long

Sorry I was in somewhat of a rush this morning and didn’t read your post well enough.

If you are running a stationary gasifier and have ac power I agree with Gary and Arvid . The shop vac will be hard to beat. If you are testing and flaring the gas it would be good to control the speed of the shop vac.

For the initial lighting of the gasifier it is best that you are pulling on the gas exits . This is so you can have your lid open and still be a draft through the char. Once the gasifier is lit and the lid closed I don’t think it makes a lot of difference as far as gasification if you are pulling on the exits or blowing air in the inlets. If you are blowing into the system any small leaks will show but you blower motor will stay clean. If you are drawing on the gasifier and the gas a little dirty it may gum the blower.

To really make the gasifier start up fast or build a good char bed I like to have means of blowing air in reverse into the gas exit and up through the burn tube and hopper and out the open lid.

On the v-8 motors and 12 volt system I like to use the three inch bilge blowers. I use two for pushing air in the air intake . Four pulling at the gas exit and one mounted in reverse to blow back through the hopper for lighting and also purging the gas from the hopper .

Wow, what a great reception. I do have a 3" bilge blower that I will try. I haven’t made my cyclone yet, or any of the other filters, so I know I have dirty gas. I just wanted to flare to test everything so far. After my flare last night I had one small pin hole leak, but I fixed it today. My goal is to have a small engine system to process my wood chunks ran on wood gas. Also have an other fixed generator 4 cylinder on a separate wood gas system. Then I have an old Dodge military truck with a Ben Hur trailer that I wouldn’t mind a V 10 with the WK system.

Many thanks and the kind help That link is not working.

One thing to bear in mind… I wouldn’t use a plastic fan to suck gas out. Can you get hold of an all metal fan? I use one from a domestic gas boiler. Another option might be to start your engine on propane, and wean it off as the gasifier warms up.

Until the gasifier warms up you have tar in the gas, not a good idea to run it through your engine till the charcoal is up to temperature.

I found a metal blade fan. Is there a way other than a thermometer to tell if your up to temp? Flare gas color?

“ Until the gasifier warms up you have tar in the gas, not a good idea to run it through your engine till the charcoal is up to temperature. “

As an example I worked my Ram all day yesterday and shut down and restated thirty times or more but only used the blowers for the morning start.

This morning with the Dakota and very cold weather, I started the motor to start putting heat in the cab as soon as possible and while the truck was idling I lit the gasifier from motor vacuum and drove off. 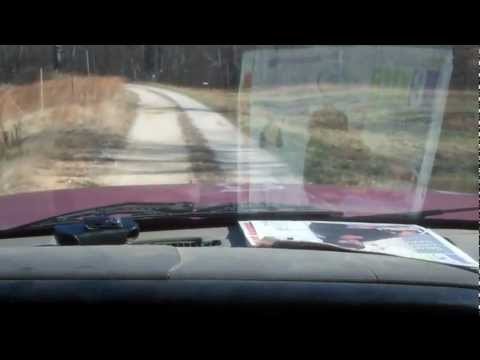 If a plastic fan is used after the cooling rails, (pulling on the lower condensate tank) the temperature will hot be hot enough to damage fan blades. The drop-box/heat exchanger plus cooling rails will shed heat to a reasonable temp. On my Dakota, after a cold light-up, with-in 5 minutes, the gas going into the drop-box/heat exchanger is about 100 F, and ready to shut off the suction blowers, and start driving. As Wayne said, a well maintained char bed on shutdown, will be making clean gas within a minute or three after being relit, or coaxed back to life by suction blowers.

Check this out. My first good flare. I made this before I found the WK web page and forum, but just got it to flare. I was using the wrong type of blower fan. I kind of copied several different styles. Bens, GEK, and some other stuff off the internet. I did however follow the Imbert measurements. The ports in the side are my exhaust inlet and outlet to pre heat my fuel with exhaust gases. Who knows if it will work. I know I still need to run it through a cooler, and filter, then into my engine. I have a few engines to try it out on. Any comments good or bad?

That gas will definitely run a motor . In the video the gas is easy to see but if it were a more sunny day the gas may be more invisible . If you kill the flare and continue with the blower and see no smoke or maybe just some haze you will know you have good gas .