Featured Project of the Month for June 2015 is Al Frick’s slide in gasifier. Al has come up with a clever arrangement for his upcoming woodgas truck - a slide in unit! With no permanent attachment to the vehicle, he can easily move it to a different truck whenever he likes.

“I made this to slide in to my Dakota, 48 Ford F100, or on a small trailer. I have to plumb the Dakota, and I’m still putting the 48 together (lots to go on it)…That silver is chassis saver paint, should never rust.” 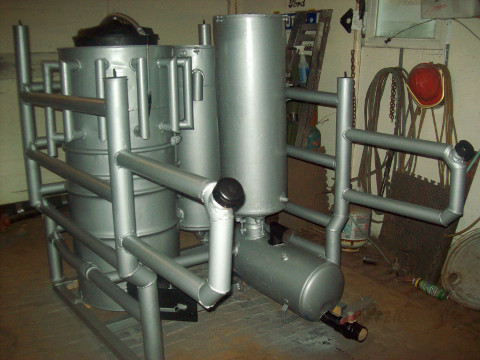 Al, if you could update us on the status of your gasifier, maybe post some new photos and a walkaround video below, we’d be grateful. Great work on this project!

Thanks everyone, I am getting over hip surgery, and as soon as I catch up on a few things I will start to install this in a 94 Ford 150. I sold the Dakota due to 4.7 has no options for timing. Will post pictures as I do the install,and plumping. The Ford is so pristine I am have a hard time cutting holes in it.

Thanks again for the kind words, Al

Now if you could mass produce 5 or 10 of them you would never have too retire.I like that idea /That is some nice fab work.

Excelent!!! I was lookig forward for a project like this for my CJ-10 Jeep. I´ll post pictures soon. Congrats!!!

How tall does this sit in the bed compared to the normal wk truck, as in the Dakota or your 94’ f150? And does it have enough power to drive on the highway with the ford? Thanks, tyler

It was about a foot higher than the cab, but didn’t notice it going down the road. I could run about 65mph. The 5.8 has a lot more than a 5.0

Good to know, just comparing that to the Dakota, a lot more flexibility with vehicle choice. Now just like Kevin said, make 5 or 10 of them and you’re set.