Just today, I finally got the whole Ardtuino UNO/Onan Wide Advance Range (on the fly) system up and running. There are still a few things I’d like to add or change, but it works!
Using my Onan 6.5NH testbed I can now set the load at some point, and vary the timing, watching the engine’s throttle position sensor reading and dialing it in for the lowest reading, which signals best power at a given rpm. 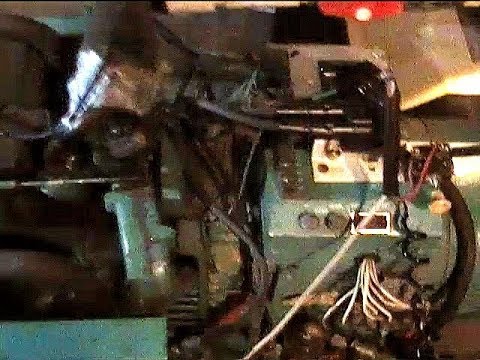 It’s all still on a breadboard, so the next challenge is to get it all packaged nicely.
The Arduino code is still a mess, but lots of artifacts from other ideas, so there’s room for rewriting, there, too.
And I want to try to implement it on an Arduino Nano, just to make it even smaller and cheaper, just for fun.

some idea to learn about your engine: ad a exhaust gas temperature read out, it will tell you a lot about the going on in the engine.
If the temperature go’s low from early sparking then you know when to adjust.

Thank you for your kind words, Koen.

This whole setup is designed to deal with timing for small engines that don’t allow for timing changes.
I already do use an oxygen sensor on my woodgas datalogger and I have extra thermocouple amplifiers to add.
So that’s a good idea.
Lately I have been learning more about all the fancy stuff that they do with modern engine computers. It’s amazing to see all the inputs and sensors they use these days. And, processing power is so cheap.
Where will it end?

Or, maybe you have not ran this engine on wood gas?

This 1977 Onan 6.5NH is the only engine that I have ever run on woodgas.
I have 3 other of these 2 cylinder gensets of about that size and age. All flatheads.
FWIW, I also have a 30KW Onan that, someday may run on woodgas. Right now it’s on propane. It has a 6 cyl. Ford with overhead valves.
ALL of these generators run at 1800 rpms and that’s why I have them.
So, I have nothing against flatheads. I suspect that newer, overhead valve engines are more energy efficient, though.
Since, as we have all heard, woodgas burns slower than gasoline, I assume that these slower speed gensets would burn that fuel more efficiently than a similar genset at 3600 rpms.
The most I have paid for a 2 cylinder Onan is $200.00. They have all needed some TLC. I thought they were all a “good deal”.
Oh yeh- none of these have electronic ignition or fuel injection.
Not sure this helps a lot.

Instead of the Nano look at the Adafruit Trinkets. They are even smaller, Ive gone away from the after market Nano been getting alot like 50% are bad. If you ever need the O2 sensor code let me know Ill get you the latest and greatest. A friend of friend fixed up my code and its working awesome.

Hello Matt.
I have 2 or 3 of the Nano here. I suppose I should try them out just to make sure they work. Actually, i’ts mostly stubbornness that makes me stick with the UNO anyway.
So far, I have only ever had one Arduino of any sort, real or clone, go bad. And that ONE was all my fault. I had incorrectly wired a Hall Effect sensor and momentarily put 12 volts onto a Digital input. But in that case, only that pin was affected! They are pretty tough little buggers.
Just FYI- the real Arduino guys have just stopped making the Mega2560. I am not surprised, since other “development boards” with much more capability have come along. But, where I need a 2560, I will stick with them It familiarity for the most part… The Mega2560 clones have gotten quite cheap. So I thought I’d better grab a few, while they are still around. I just got 3 of them delivered here for 30 bucks.

O2 sensor code:
Don’t tell anybody, but I am still using a a two wire narrow band sensor in my woodgas datalogger. I don’t run it the way they did in cars, but it works well for my needs.