This is hard to explain, but a flybridge on a boat is where you can drive the boat from both deck above and a cabin below, and very few examples of this exist on vehicles you can drive on the road. I’ve created this topic to brainstorm ideas of how this would be accomplished, and if any of you have seen any examples of this done before. a great example is from a guy named Randy Grubb, he has created what he calls the DecoLiner. it features a driving area from in the cabin below and the flybridge above. 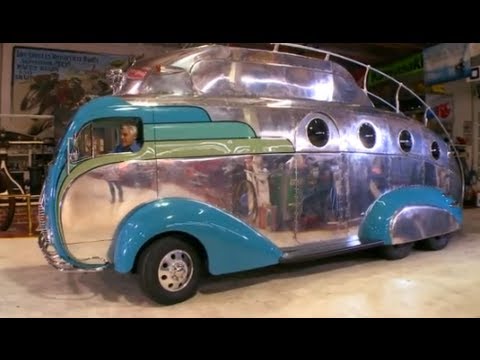 Watch out for low bridges, I guess. Having been almost thrown off the flying bridge of a boat (not my boat) when the steering failed (too fast small-radius turn), I would consider the physics of this, and it would just be a nice parade vehicle. If you want the wind in your hair, get a motorcycle.
Thanks for the video link, Tyler!

An episode of Mr. Bean comes to mind. I’ll see if I can find a screen shot. 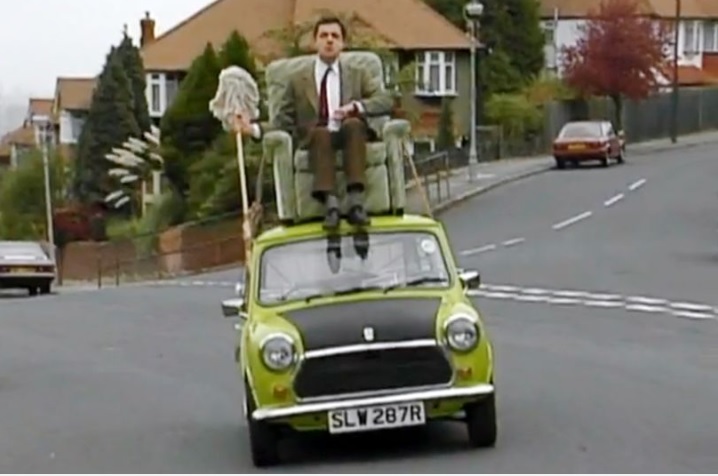 Thanks Mike, this is just an idea that was very interesting to me and since it was so uncommon I took it here. I guess there might be a reason it’s so uncommon. A lot of rural bridges for train tracks are under the legal vehicle height of 13’ 6" in Wisconsin. If I were to build something like this, I would keep the maximum height of somebody’s head at 10-12 feet otherwise while driving I would have to keep a bridge-less route.

Tyler,
Don’t mind me, I’m just having some fun with this concept. Here is a real-world example vehicle that has two control “decks”. 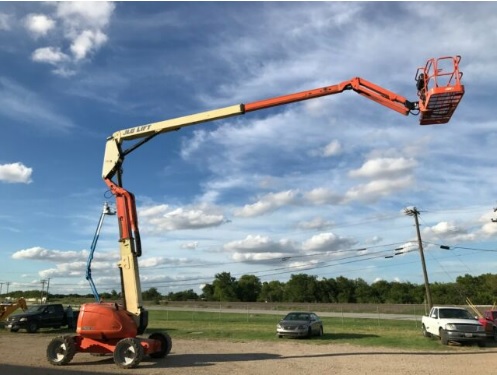 That is a great way to put that concept, here is a picture I drew of a mid sized school bus with a flying bridge. 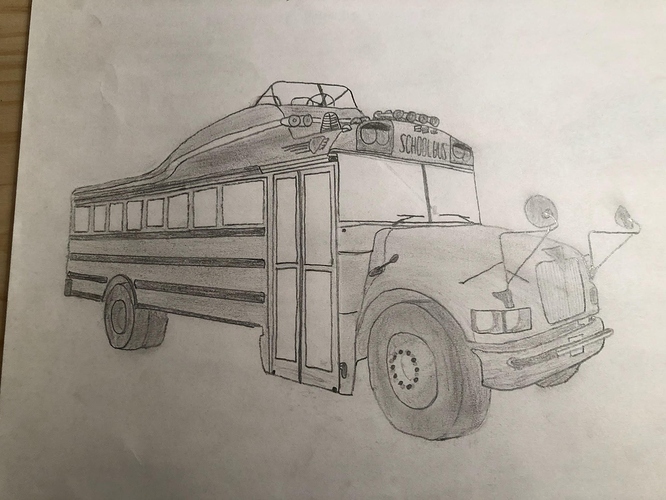 unnamed2048×1536 404 KB
the total height i would estimate is around 12 feet up to the top of the windshield on the upper cab. Your head would be right around the 12 foot to 12’ 6" mark depending on how tall you are. that is getting really close to some bridges, and since a school bus is already at the height of a semi truck driver, you are definitely looking down at semi’s by around 3-4 feet.
4 Likes
TomC (Tom Collins (Crivitz, Wi.)) January 3, 2020, 2:14am #6

thanks, any ideas on how one would duplicate the brakes on an air brake system so that there is two foot valves, one on top and one on the bottom which are both independent of one another? if you placed a manual valve before the first pedal, you could run a line out in front of that manual valve that runs to the foot valve on the flying bridge, then feeds back into the normal brakes. here is a diagram 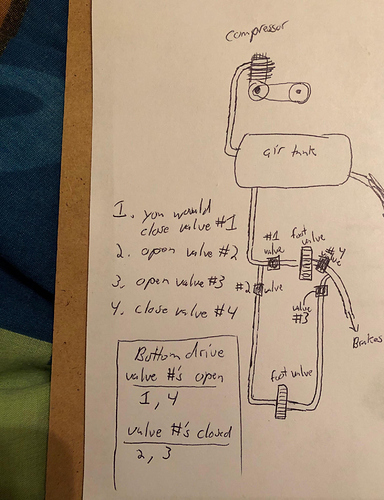 unnamed%20(1)1573×2048 379 KB
I am aware that this is a terrible idea if done wrong, as air brakes can use up to 130 or 145 psi at max, and that if you operated the wrong valve at the wrong time, next thing you know you are going 50 down the highway and have to use the emergency brakes to slow down, but besides the amount of hard to reach valves and the inconvenience, this could possibly work.
1 Like
MikeR (Mike Reynolds) January 4, 2020, 9:04pm #8

Tyler, I don’t know anything about air brakes. I would use electrically operated (solenoid) valves with some kind of interlock and fail-safe so that you could not lose control over braking.
Here is a picture of a boat like the one that had steering problems. That was a purely mechanical system. 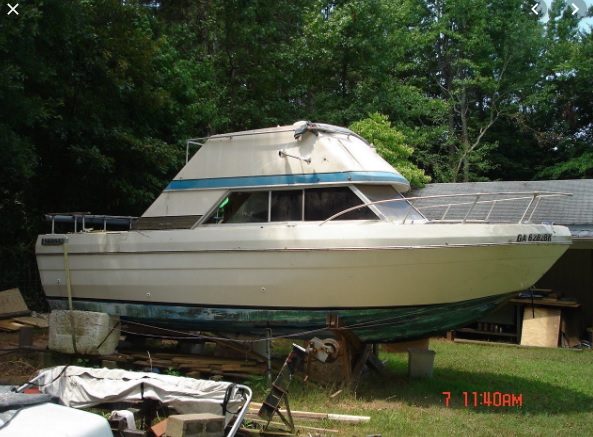 That would make sense, i would figure that if you put solenoid valves, you could wire only one switch to operate all four valves, two opening at once and two closing. without power, the solenoid valves would be either open or closed depending on what you needed it for. I’m almost certain on a bus there is two sources of braking, one being the air when the system is powered, and one being springs when stopped, and to disengage those springs you need air.

For get about air brakes. I have a perfectly good truck that I used to move from Calif to Wi. After getting here and getting my house and barn built I didn’t use it much. When I let it set for a while, the air would blead down and the brakes would lock up. When I wanted to use it, the air would not release the brakes because they had become rusted to the drums. A couple of times I built up the pressure to release the brakes but as I say, the shoes were rusted to the drums and I “smoked” the clutch. I don’t even know if pulling it with a bull dozer now would brake the shoes loose. TomC

It seems like hydraulic brakes would be much better for that application as the gmc motorhome Randy used seen in the video i linked are hydraulic, it may be easier to split the lines and adding brake lines up to the top would only expand the amount of brake fluid and shouldn’t decrease the stopping power.

When I let it set for a while, the air would blead down and the brakes would lock up.

Maxi-cans at work. To free take a long steel bar and keep bashing the brake drums until they free up. Have the maxi-cans released (push in the big round knob in the cab, must be up to pressure).

If it was a hydraulic system, you could theoretically put a T joint in front of 2 brake lines from the master cylinder, and run 2 more lines up to another master cylinder in the flying bridge, and without any valves, you could use the brakes on top and bottom. would the pressure from the second master cylinder affect the first one? The brake fluid goes in the path of least resistance, so I would think it would go straight to the calipers, I guess just one master cylinder would experience the same back pressure because of the fact that the the force is exerted equally unless there is a less resistant path as in the case of the caliper. here is a rough diagram 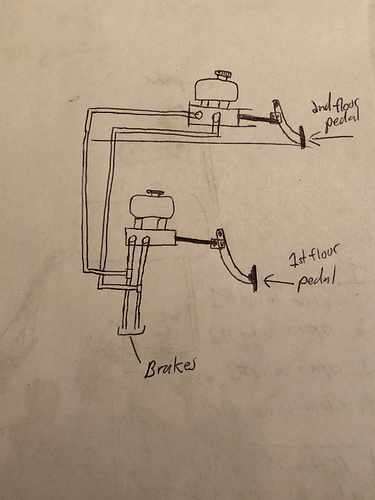 unnamed%20(2)1536×2048 294 KB
Now, hydro boost is another problem, to run the hydro boost, it is using the pressure from your power steering to assist in braking, that involves more lines being run to both master cylinders, and with a more complex system, more unreliability unless you do it properly. Not only that, but with an assisted system such as hydro boost, if you are running that pressure boost to multiple master cylinders, it may decrease power of boost.
1 Like
JocundJake (Jakob North) January 5, 2020, 11:57am #14

you would probably want to use the same type and size of master cylinder on the top and bottom so one does not overpower the other. I would be concerned that the top master would just blow fluid out the reservoir of the lower. Just a thought.

I would be concerned that the top master would just blow fluid out the reservoir of the lower. Just a thought.

Your right, the fluid needs to flow back in. Good catch!

How about a valve to shut the master off when not using? Don’t for get, though…

Those are all good points, I was afraid that the separate master cylinders would not keep equal fluid levels. If you were to put valves in the brake line at any point, they would have to be very strong valves and to make easier to use could be solenoid valves if they make such a valve of those dimensions and to withstand that pressure. This leads to another question, In the video I originally posted about Randy and his Decoliner, he states he has hydro boost, and he also does not show him switching any valves to operate the top brakes. He either didn’t show it or he found out a way that he was able to not have any problems with the fluid levels or overflowing in one master cylinder reservoir.

Would the top reservoir just keep taking the fluid because the check valves on the bottom master would not let the brakes release? The fluid would take the path of least resistance and just dump in the top reservoir.

I wonder if using a proportioning valve like this one 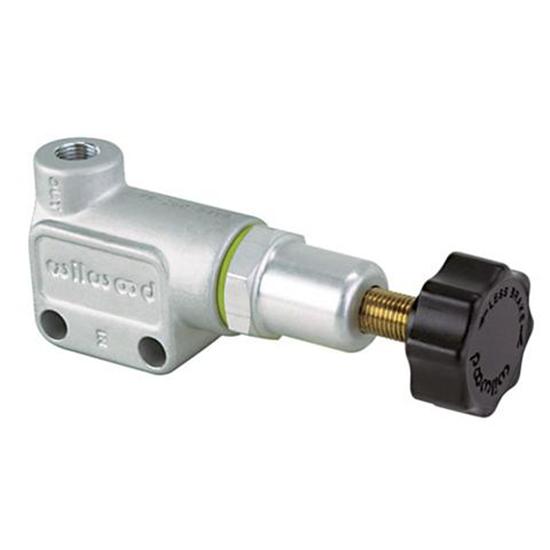 This device lets you adjust the front-to-rear braking balance by proportionally decreasing the rear (or in some cases the front) brake line pressure. Can also be used to adjust individual front wheel braking in dirt track applications. Valve weighs...

would work to let a smaller amount of fluid at once flow to the top master cylinder reservoir.

that might work. Also another thought if the two reseviors were connected at the same level they would just equal out. So depending on the height of the second master If you extended the the reservoir of the bottom hopper to match that of the top and connected the two it would be a closed system so the fluid would just level out no matter which petal you used.