Continuing the discussion from About the Charcoal Gasification category:

Gary Gilmore had an idea on the way home from Argos in 2015 that inspired the design for this experiment. He was thinking about how a forge can survive metal melting temperatures without a so called nozzle. He posted some pictures on the Yahoo Charcoal site and also on his thread here about his 2004 ford Ranger.
That made me want to experiment with his concept too so I built my version of it and made a slide show of my efforts so far. 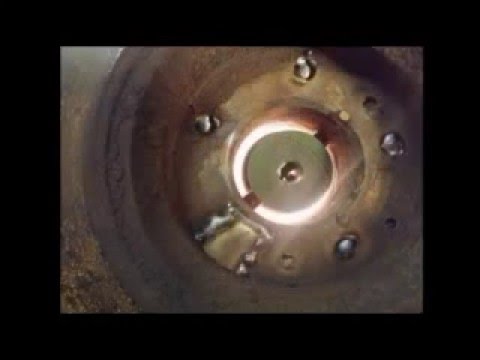 The concept is to have cooling air enter around what I call a “heavy slug” grate that is able to rotate to allow ashes and clinkers to break up and fall through to a collection box below.
I made my ash box out of an ammo can that opens up and also seals tight.
I had this 30 gallon gas water heater tank with a concave bottom but it was concaved the wrong way so I cut it and welded flanges so it could be assembled concave down. I noticed a small well or depression around the center chimney section and that became my steam boiler reservoir.
A brake rotor center hole happened to be exactly the same size as the center hole of the former chimney and 3 notches now serve as steam escape holes that injects the steam up into the center of the incandescent flame cone.

That really looks good Don. We are anxious to see how well it survives the test of time. Is this the one that will go in the Tracker? How about a lite up video?

I have worn your video out looking at it — I have been using stop motion to try and digest everything. I wish I had the posting that Gary did about a “cold air blowing onto a slug grate”. I haven’t got that straight in my mind. What is the round hole in the lid of the amo box? Looks to high for an auger

( a lady in Escanaba had a really nice looking "93 Tracler. under 100 K miles and had been part of it’s life in Florida. I sure wanted to call and make her an offer — I don’t dare take on anymore project than what I have now.)TomC

What is the round hole in the lid of the amo box?

The round hole in the side of the ammo box is the air inlet. That will have a valve to keep air out at shut down.
I did not see that post about cold air and slug grate. Find that if you can.

Don the part of the puzzle I’m having trouble putting to gather is " why did you need a spot welder"???TomC
You have a good memory for an old guy

I hope you don’t mind but more questions; So the hole in the amo-can is for air. The air comes into the center and passes that “flopper grate”? Then you have a tube coming in from the side as a lighting port? Do you have a glass cover on the lighting port when it is actually running. And finally what are you using to pull gas through the gasifier. It looks like a squirrel cage blower. I never could get those to pull much vacuum. I love it when someone post a new build. So much to learn from so many smart engineers. ( I know you are a building inspector, but you sure think like an engineer )TomC

Yes Tom, The hole in the side will connect to the air intake valve and the pusher blower that is already on my Tracker. I forgot to mention it above but I am planning to install this temporarily in my Tracker while I make some improvements to my wood gasifier that is in it now. I will be using the gas cooler/exchanger tanks and the hay filter already mounted on the Tracker so the switch over will be easy. Later I have it planned to run a stationary generator.
The lighting port has a 1 inch pipe cap with a glass lens cemented in while it is running, - kinda fun to see the bright light in there! The squirrel cage fan is actually an inducer off a high efficiency gas furnace that puts out 65 C.F.M… My Tracker uses about 34 C.F.M. at 3000 RPM so it should run fine with about half of that flare gas. Not sure how long it will idle and make good gas though.
The dual cyclones were made for two reasons: first to save space and second to keep the diameter small so it spins the dust out faster and keeps the gas volume high by dividing up the work. I have close to three hours run time on it now and there is about 1 inch of dust in each collection jar. I opened the ammo box and looked with a mirror at the slug grate from the bottom while turning the-as you say- “flopper grate” and I don’t see any signs of deterioration of it at all. That is a good sign.
My building inspector job was supposed to be temporary after I retired out of my building business but here I am - still doing it - half days… I think my wife likes me out of the house

Maybe in my third career I might try engineering.

Don, you are an amazing builder. I wish I could think like that.