I’m wondering about this fuel size, if it is too uniform, (all being 3/4") or too small? The video is self explanatory, the pic is some 3/4 square about 3-4" long. I hate to throw anything away, but realize too small is too small. Interested in your comments. My vacuum continues to run 3:1 or 4:1. Will this improve with a larger restriction on this sive fuel? 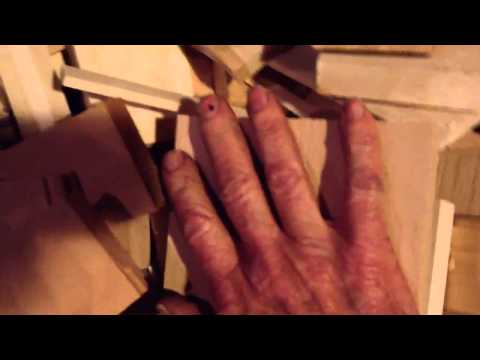 I wouldn’t worry much about the small sizes but I would try to cut most of them to 4 inches or shorter in length . Bridging would be my concern of the wood you are showing.

If I were using that small and very dry wood I would come up with some huge blocks 4x4x4 or grapefruit size and try to line the big blocks so they would feed into the burn tube at about 6-8 inch intervals .

Please don’t throw the wood away.

Hi Carl, When you say, “throw away”, do you mean that you put it in the furnace that powers the kiln you mentioned in your Bio? Could you build something into your kiln furnace so you could insert a retort containing your “throw away” pieces. Once these longer hunks are converted to charcoal they break up really easy. Then when you start up the cold truck gasifier, load a bucket of this charcoal at the air input area, on top of the char bed, and top it off with several bags of your hardwood. Sort of like when Wayne recycles his slipped char?

Carl, Someone on one of the forums suggested that the wood size should be between; the size of a “match box” and a “pack of cigarets”. That is what I shoot for. They are small enough that they won’t bridge and yet they are big enough that they won’t pack together thus allowing hot gases/air to pass on all sides of the blocks.

Hey Fellows be careful here with actual specified fuel chunk sizing recommends.
This is the “Small Engine Uesrs Corner”. We top out here with four cylinder engines with correspondingly smaller gasifiers and needed fuel wood sizing than with an American pickup multi-liter V-8 set up.
Then toss in the huge differences between a typical small internal volume “planer”(sp) combustion jet zone set up like the typical Imbert derivative versus one of Waynes “charpot” globular combustion zone set ups and there will be dramatic differences. This IS even before factoring in the different burn, resin and mineral ash rates of different wood spieces.

CarlZ for your WK V-8 vehicle system I’d use Waynes advice to try with first.

Sorry Steve, I didn’t notice the “small engine” heading. I was just looking for a thread about fuel size. Maybe Chris can move this or start a new thread for WK fuel.

And no, Ray I don’t have the wood furnace anymore, When I say throw away, I mean throw away. Here in SW AR there is more timber then we know what to do with. Large paper company holdings, and even larger national forests, plus many many small holdings.

Topic moved. Only comment I’ll add is, Carl that looks like DRY wood which can be very helpful to a new driver. Good stuff!

Thanks for the move Chris. I hauled several hundred pounds a week during the summer, and need to get back at it. All KD 10%. The supply seems endless. I just need to find some chunkier stuff to go with it. I have several pine 4x4’s that I will try next. I’ve located 2 small sawmills that might have edger strips later on. They will have to dry though.