Wayne…I know this is off topic, but was wondering if you have messed with wind generators any. I would like to show you some pics of the one I built if it is ok, or is there some where else I should post the pictures. It has an 18 foot diameter 6 bladed prop I carved from 2x10 pine boards, on an 80 foot self erecting tower. I’ve seen as much as 250 amp output on my amp meter. I have a 2300 pound forklift battery for storage with stackable inverters with up to 10,000 watt capacity. It also has an air compressor on it that is hooked to a centrifugal switch that I use as a governor for the windmill. When it turns to fast the switch kicks the clutch in on the dodge air conditioner compressor which has a swivel that allows the line to come down the inside of my pole and connected to an 80 gallon air tank. The tank pops off at 100 psi which creates enough load to keep the mill from over reving and I also always have air with out running my 5 horse compressor in my shop. Well except when I’m using more than the generator compressor is making. I also have a switch I can kick on from the ground to activate the clutch if I need air and it is not hitting the centrifical switch. I used a wash machine motor that has a switch built in it. I pressed the armature off the shaft and just used the very light weight aluminum housing, with the shaft and bearings, and switch, and run it off a v-belt. Anyway …I gotta go. Thanks
Gary

Gary,
I for one would love to see those pictures. Any close ups on the carved blades?

I along with many others would like to see your wind mill pictures . I think anyone interested with wood gas is also interested in any form of alternative energy .

Hi Gary
Count me in too. Lots of details please.
I have tried 2 small ones but the high winds ripped the blades off, no breaking system!
Thanks
Patrick

Me 4
wants to see pics as well

I’d like a look at your pictures. The one I built is a 3 blade 8 ft swept area. You’re would be like wow!! Did you say windmill??! Yes we must see the photos! Here’s mine, day befor yesterday. I had it running a home wound dynamo that once burned a #8 cable in half. Now I just live in it. Yes, me too. I have a windy spot on the farm, always wondered what was possible. I still dare to dream.

Sorry it took so long…Here are some pictures. Air compressor was added later. John S. …What’s the diameter of your blades? Looks huge in the picture.

This is the generator I’m using…I also have a homebuilt electric 48 volt motorcycle that has the same generator used as a motor. I believe it is 10 H.P. at 48 volts. I ride it to work…(in the summer…lol). It will run around 55 mph the way I have it geared.
Gary I’m running 4-0 welding cable from turbine to the house.

Gary, your windmill appears to be an AWESOME project. Beautiful. And beautiful thinking/planning/engineering/constructing/erecting!
My “blades” are not really blades. I used to have more blade-like structures: slightly twisted lattice works over which I would stretch canvas sails as in Holland or England. They were 36 feet in diameter. One nasty day in 2000 a storm blew off the whole third floor, blades and all. When I rebuilt the cap and sails I went with more of a Spanish/Portuguese design with no lattice work, just rigging like on sailboats. So what you see in the picture are masts for rigging sails which are presently rolled up on the 2nd floor. You can see more here: Homemade Windmill in West Central Minnesota - YouTube

You guys and your videos. Can’t view them here … I think the sailwing is one of the most productive as well as self regulating in intense winds … It is so windy here right now I can’t even hear my wind turbines. I need to add water to my batteries but it is still too cold to do that. I just thought I’d post my pictures from Buffalo, NY from over 30 years ago for your entertainment … Bring on spring !!!
http://www.trip.net/~mlarosa/Buffalo/
http://userpages.mhtc.net/~mlarosa/survey/survey.html
Mike …

Blow wind blow , but please not too hard !! 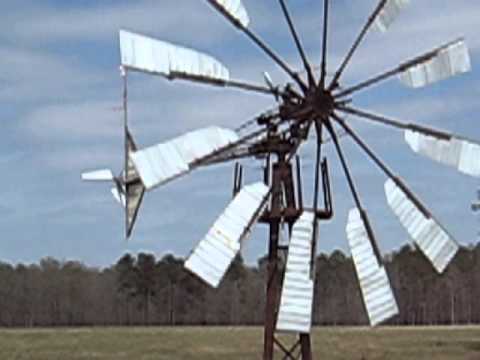 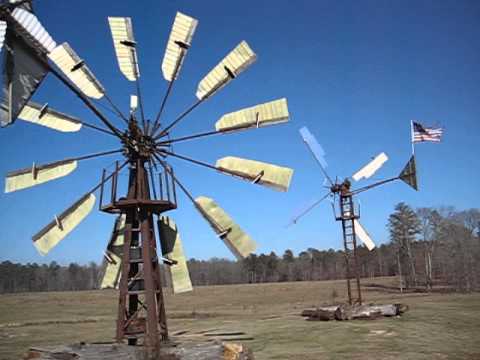 Wayne, Mike and Gary, some of you Woodgassers will try ANYTHING just to get something going!!!

John, We all have one thing in common now. NO KNEES … Tough to climb up and fix things … Mike

This used to be my house and generator prior to losing it through a divorce. The generator is a restored 1500 watt Dunlite made in Australia on a 24 Metre tower that I built. Looking down it seemed more like 100 Metres. Hi Gary, Sh_t happens … At any rate, of all the wind machines I have ever seen, Wayne’s were by far the the most serious, just like his gasifier. What a pleasure to climb up and stand on those towers. I would dream of building wind machines like his but I am a small “Italian” man and can not think that big. Too bad we get old and the storms keep coming to wipe our hard work out. If you are still young enough to go another couple of rounds we will try to back you up. I’ve been packing clay in my new hearth … I need to get some sleep and deal with my German wife and get back at it in the morning. My new gasifier is a gem and I know it won’t give me any crap when I fire it up … SWEM, Mike