Do you have a box full of springs to try before you get the right one?

ha the last picture you drew makes more sense to me you can put the lamber senser on the gas side then it would probly work better but what do i know. how big is that motor you are running not a car engine . if you were it would have to be much bigger. or that is what it looks like by the picture.

Today I finally tested the mixer, I also added a cyclone with a wire filter in the middle, this is how it works

I always like the sound of engines inhaling charcoal gas. That thing runs sweet!

Wow!!! Your mixer works very well. And you seem to have zero inertia effects. I don’t understand everything, but your results are amazing.
Rindert

How do you make the mixture richer or leaner? Pressure regulator?
Rindert

where do the parts of your air / gas mixer come from?
have you machined the venturi-shaped parts or are these parts recovered?
I love your daring creativity (like Kristijan) the blood of “Nicolas Tesla” flows through your veins

Yesterday me and my wife had a nice long Sunday trip, visited the South of the country. Been a while since we did this and specialy with all the quarantene percaution, you need a damn good reason to go anywhere. Anyway, we did, but more on that later on my topic.

We visited Tone. Had a long chat, site seeing and a nice lunch. I made a few videos, none of them of much quality but bare with me

sorry for that camera lense wipeing

Videos shuld all upload trugh a couple of hours. I will not post individual links here, l suggest and highly recomend you just go to my Youtube channel kristijan leitinger and wach them. Most regard Tones gasifier and mixer, there is allso his LPG BCS harvester and his two stroke diesel, both wery interesting and runing as sharp as a razor.

Now to the woodgas “carbourator”. You can see in the videos l tested and tortured it in all possible ways. I admit, l was sceptical but now l am sold. It is allmost as stable as a vacuum automixer but way way simpler, and could even be made simpler (turned upside down with weights on the float instead of a spring). You can se how easy startup is! Hook up the gas and crank the motor. Correct mix instantly. That in my eyes is a huge advantige over any other system.

You can see l tryed to richen or lean the mix in various rpm ranges to see if the mix is indeed ideal. Any other fidling thain leting the mixer do the job will make the engine run worse.

You can see the amazement in my voice when l noticed the shopvac pushing on the gasifier full blast while engine runs as smooth as with no blower! Try doing THAT with either manual control or a vacuum automixer!

I can only see 2 possible problems with this. The mixer does produce some drag and it may hurt max power. But on the other hand the mix is much more homogenous, meaning better efficiancy during combustion so only way to tell what will happen is to test it.
Second is soot collecting on the slide. That might be a problem with sooty damp wood gas. But if the mixer wuld be springless and say made of aluminium, it culd be burned with a regular intake burning session, or brushed with a toothbrush periodicly.

I suggested to Tone we do a collab for our virtual Woodgas meetup. He agreed, so it is likely we will be gasifying the Škoda. I have the gasifier more or less built (stripped it out of the Mercedes) so l will do the hardwere and Tone the gas mixing part. Looking forward to it!

I was thinking that the Tone S. Auto-Mixer (brilliant) would also be able to in addition to mixing gas and air, would also provide a point to inject 2-cycle oil for a 2-stroke engine. Maybe a center tube that measures drips into the mixed stream. Did I mention this design is BRILLIANT?

Thanks for the videos Tone and Kristijan

I call this smart engineering… thumbs up from me…

Just thinking more about gas carburetors. I think we can make a ‘stand alone’ carb. That doesn’t use a butterfly valve.
Rindert 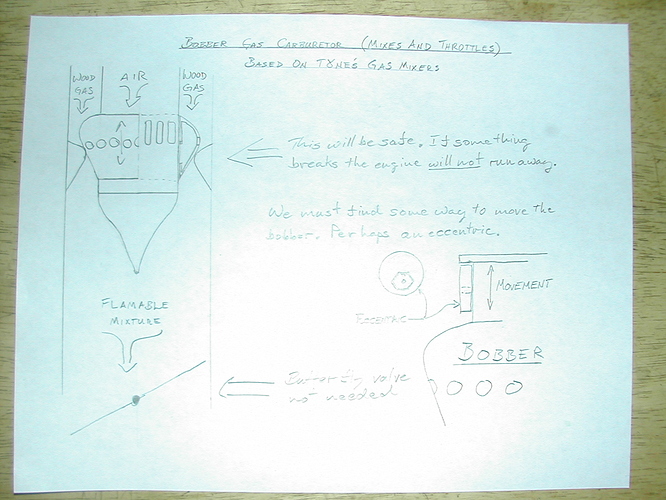 The good thinking, Rindert, would probably go, the only drawback is the pressure force to overcome. I am attaching the links of carburetor and gas mixer operation to a variable diffuser

Hi, Rindert!
27.4.2020
It seems like the moving part is on the “pushing” side of the "valve-seat"and cannot be opened by the flow going from the upper side to the lower side!

What force would rise the regulating body?

Sure not the sucking from below…

If I read the drawing correctly, some kind of throttle connection (eccentric) raises the bobber and acts like the throttle and the mixer at the same time?. The throttle plate drawn below has an arrow that says it is not needed. It will be tricky to make the slide connection for the air supply above the bobber air tight in the gas stream.

Hi Tone,
a really great and simple automixer!
You already wrote that the spring needs adjustment to correspond with idling and full throttle (movement of the valve).
Could you describe the background of the dimensions please? I mean the size of the holes in the air pipe to the area of the wood-gas flow.
Is the area of the holes the same as for the gas around the valve for a 1:1 mix?
Thank you!
Til

It seems like the moving part is on the “pushing” side of the "valve-seat"and cannot be opened by the flow going from the upper ide to the lower side!

What force would rise the regulating body?

Sure not the sucking from below…

Your foot on the accelerator would provide the force to raise the bobber, or regulating body as you call it. (regulating body is perfect)
Some of the parts look a little bit the same as Tones, but the theory of operation is very different. This idea is closer to to a slide carb.
This idea could also work upside down, so to speak. This would prevent the valve from ever jamming in it’s seat. But it would also allow the engine to ‘run away’ and ‘over speed’ if the linkage were to break somehow.
Rindert