Gasifier behind the tailgate?

Has anyone mounted a gasifier behind the tailgate of a station wagon?

If so how did you make it so one still can open the tailgate? 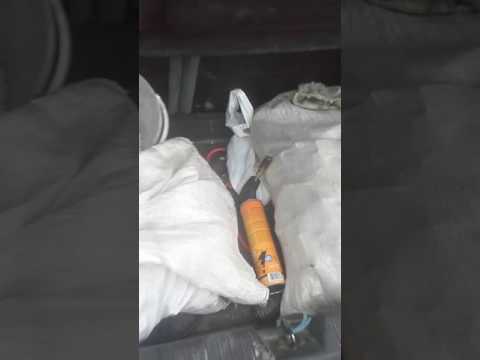 One way to fix a gasifier on a car.

That was a great ride with you again Kristijan. Did you sale that car?
Bob

That’s work but I have to make sure to keep weight down as the leverage will make the car quite light on the front wheels.

Sorry I don’t get what you mean exactly.

Should I mount two arms with hingers at the hitch and move them out like a V?

Or should I hinger a arm at the cars corner and fixate it on the hitch?

Only problem with hingers is to get them strong enough and to get a flexible gas pipe that handle the heat.

Thanks for the ride driveing on wood gas. That little hopper how many miles did you need too get too work. 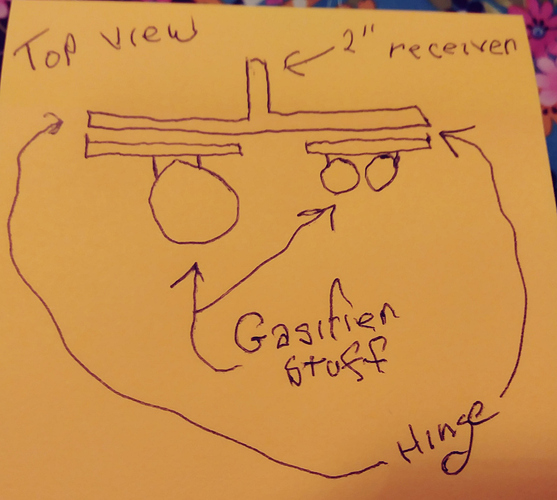 Just an idea made from 2" square tubing. Maybe just one hinge and a longer arm. Maybe flex tubing or disconnect when swinging open. When closed the latch should secure that end releasing most of the strain from the hinge. Maybe start with a trailer.

Maybe make it out of pipe, except the 2" receiver. For the hinges use threaded pipe elbow or what ever. It would work as hinge and gas pipe. Not sure how much it would leak??? Maybe use a pipe union as the hinge point.

Not sure how much it would leak??? Maybe use a pipe union as the hinge point.

I like the Idea of using pipe that can be the gasifier and second as the frame. Dad and i have considered building a car that has the gasifier as part of the framing such as the frame seconding as the cooling rails. I am not sure of this but I think the elbow threads would be less likely to leak than the union.

Story time. When I was working the racing circuit I was in Daytona fro the Daytona 500 stock car race. Before the race Smokey Yunick brought his race car in for inspection. They filled the gas tank with fuel and then drained it to make sure it held just the proper amount. Next they checked the slope of his windshield and it FAILED. Smokey was so mad, he jumped in his car with the empty gas tank and drove over 15 miles to his shop.( how much gas would a roll cage hold???) TomC

Thanks for the story, Smokey Yunick had many creative ideas.

I don’t think a rollcage would hold too much of gas and in a enclosed vehicle so would running woodgas though it be quite hot.

I know one that did run his exhaust though the frame rails and it did get a bit too hot.

Only problem with hingers is to get them strong enough

Expanding on Jeff’s idea, the hinges could be only strong enough to swing the unit out. For driving the weight could rest on the tow hitch, held in place by a pin…

Making a hinged frame to mount the gasifier on seems possible, but what can I use for flexible gas piping?

Could I use a radiator tubing or flexible exhaust tubing?

Jeff Davis idea was very clever, but I would need a lathe to make the threads.

but I would need a lathe to make the threads.

Do you not have access to 2 inch threaded pipe?

I found some black pipe fittings, I think they are made of cast iron do you think I could weld them to mild steel pipes?

If in doubt about welding cast or what ever the fitting is, use BRAZE. You cant’ just heat the braze rod up and drop it on the fitting/pipe. You have to heat the area real good, so you can almost just wipe the rod on it-- like leading a pipe. TomC

If the elbow is cast just have your pipe threaded or weld a short threaded pipe onto the other pipe. Gas well fittings are very heavy. Two inch gas pipe might do it. Maybe grease the threads. Maybe install a few zerk fittings.

I used that stuff on the MEN gasifier.