Hi Guys,
Looking at connections from gasifier to cooler. What is a typical temperature range at the output. Trying to determine how not to melt anything : )

As high as 700 degrees gas temperature, surface temps a little lower. Silicone hose works OK, Wayne has used it before. Or just a metal-metal connection with high temp silicone sealant.

Hi Brit,
I’ve recorded 650 degrees Fahrenheit coming out of my gasifier, a little hotter if you run the fuel down too far because then you only have combustion going on. No heat lost to pyrolosis and fuel drying at this point in the burn. I’m still feeling my way around my gasifer and tend to run it too long. I’ve kept track of the run time on weighed fuel, so my next runs will be clock based. I want to be able to predict a consistent refuel time. When I ran the fuel down too far, the start up was slow to heat up to optimum running temp. I will be adding a temp probe in my lighting port for a read on the hearth temp. A lot of the heat went to drying and pyrolizing the new fuel load, especially in the area around the nozzles where I let my fuel run down to. You want to avoid this. I put a gauge on my preheat exhaust to see how well that worked, temp rise from ambient temp. I also put a gauge on the cyclone exhaust, the gasifier exhaust and at the end of the cooler pipes. The gasifier exhaust goes into my preheat system and exits it to enter the cooling pipes and then the filter system. It’s surprising how much the preheat system cools the outgoing gas, so far as high as 240 degrees F
This is a little wordy, but worth noting, imho.
Pepe
EDIT: 11/24/15 All the temps were registered on BBQ thermometers with the probe in the gas stream. I’m sure the outer shell temps would be lower but I really wanted to know the inside temps. 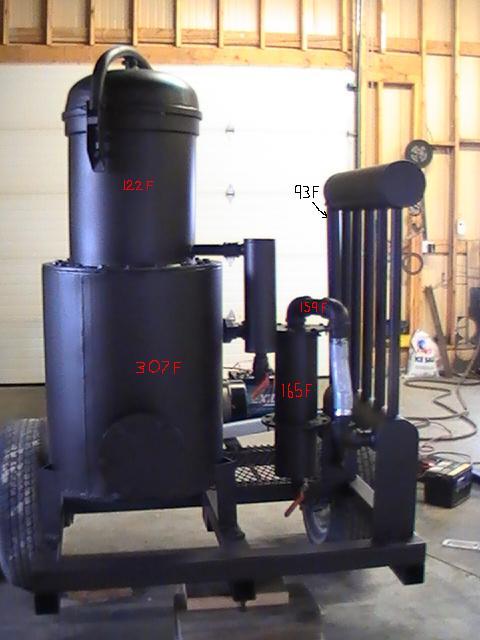 Typical of one of my small systems

Arvid; Are you measuring the temperatures with one of the infrared meters or thermocouples? They look rather low for actual gas temperatures. TomC

We used an ir imager from the local fire department. Its what they use to find Hotspot when putting out a fire

I bet that was cool (or warm) to watch! I’d guess that a time-lapse of the start up process would probably look like a magical monster growing up out of the hearth.

I heard that there is an Iphone attachment that does this.

Hi again,
I went through my posts on “My first small engine run” in the Small Engines section. I have some gasket fail pics in comment 258. Note in 258 that the interface is “boxed in”. In comment 394 I cut the boxes leaving only the 4 corners for alignment during assembly. I use this metal to metal connection from burner shell to preheat shroud/cyclone connection with the extension to protect the gasket from extreme heat. Mods to deal with heat start with comment 354. Comment 360 shows hearth heat damage and how I dealt with that issue. I will be tearing down my unit in a month, so we’ll see how it worked. There are several other heat resisting mods I made that will be interesting to see if the helped. I’ll keep all posted.
Pepe

650F on the Victoria. 250F if the gasifier has an internal heat exchanger like my big machine.

HI builders,a cooling channel could be used around the seal area,too pull cool air intoo the preheat,exchangers.If desireing cooler seal or exturnal temps near the top.

Hi Kevin,
You reminded me that I thought I would put a shroud around part of my cooler and pull some heat off there to feed the preheat shroud I already have on my cyclone. That would boost cooling gas and heating air. It’s kind of a pain but doable. I might do it this winter iff…if, if 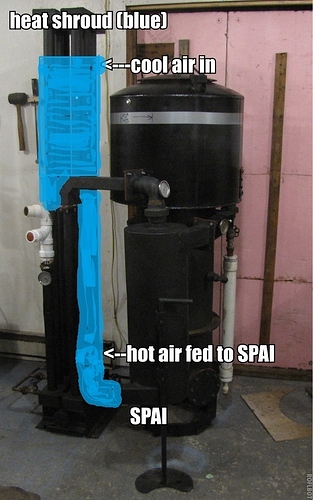 This is what I had in mind, an alumunum shroud.
Pepe

Ill weigh in here, what I have found is the gas output port from the gasifier leading into the first stage filter typically runs from 300f on upto 450. If we are bellow this then the machine is running cold and if we are running higher temps than this is a sign of bridging and a fuller combustion condition is present.

Grate temperatures are in the 1400f and can reach as high as 1550f depending on conditions and hearth temps can range from 1800f on up to 2400 under normal operating conditions.