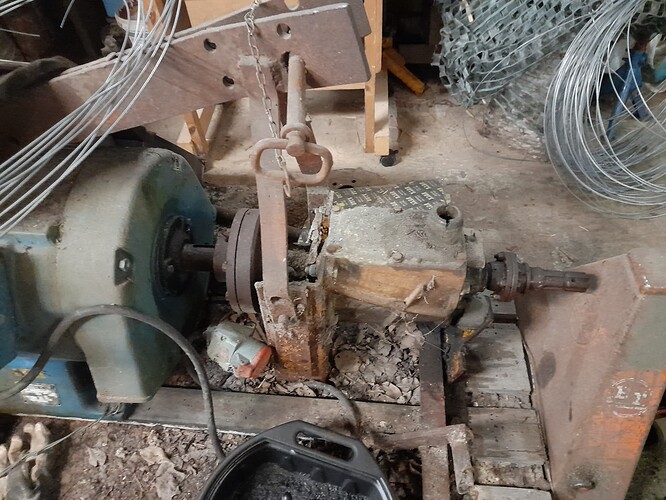 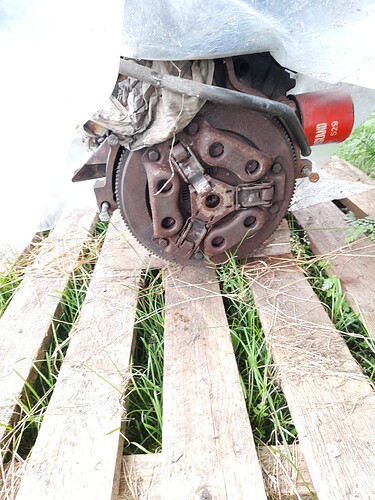 Not sure what I’m looking at Jan. Is that some sort of transmission at the back of the generator? That would be good so you could start in neutral.

Hi Jan, you should motorize that tractor-generator? Wouldnt easiest be to swap out that m40? gearbox, to another turned the right way? Would fit that engine directly, and you can use the original clutch.
Edit: what engine is that?

The gearbox, is for a volvo duet I think.
The engine is a saab v4 (96), and if I take a gearbox for a front-wheel drive saab, I get 2 axles.
And I only have 1 gearbox for a v4a, and wanted to keep it for the illern.

Ok, i dont looked close enough, i just thought it was a Volvo engine. The v4 engine you can use Ford Taunus gearbox, i think they are rear wheel drive, even Ford Granada with v6 has the same bolt pattern, only (ingående axelns stödlager i svänghjulet) is different between v4 and v6, clutch disc i think fit, (i was once into converting a saab v4 to 4 wheel drive, by using gearbox from Ford v6 xr4×4)
I belive it’s to long trip for parts, others i have some dissasembled v4 gearboxes, if i remember correctly it should’nt be to hard using a empty gearbox case and weld a part on incoming axle, thought rear lid on gearbox.

Do you have any idea how I should connect the engine with the gearbox, rubber coupling?

A rubber coupling can be made from a small tire. It will allow a little shaft misalignment.
Rindert

Maybe I’m stupid, wondering if I need a gearbox if I put it directly on the engine,
I think the generator should have about 1200-1500rpm. Yes, if I did something similar like a rubber hardy disc maybe it should work.

It seems to me that you only need about 10 HP from the engine, so, In my opinion, don’t use a gearbox at all. That engine should be able to deliver enough power even at 1200 rpms.
But you do need to know the speed that the “generator” needs.
Is that a DC generator? AC? Frequency if AC? What is its output voltage? Single phase or three phase?
What are you going to do with it?
In any case, you will need an engine governor, won’t you?

It is a three-phase, 400 volts between phases, 50 hz.
I was going to run the saw, the planer and the splitter and some other things. (not at the same time)
I was thinking about making it so I can connect it to the outbuilding with garage and other things.
Yes, you’re probably right, that I need a speed regulator.
I had made it for the tractor before, and it has regulator.

It seems to me that you only need about 10 HP from the engine,

Need about 15 to bring a 7u kva unit to full power.

If that’s a 1500 rpm unit I would just directly couple to the engine.

Governer.
This will work.

dont looked close enough, i just thought it was a Volvo engine. The v4 engine you can use Ford Taunus gearbox

The engine is actually a FORD.
There was a series of 4 and 6 engines for made for the Capri.
I think DKW used this engine, it was imported to the USA CAN in V6 form for some cars too…

What I would do for SAAB 96 with the 3 cylinder 2 stroke.
What a machine ( or DKW I am not too proud to drive a German car )

Yes, you’re right Wallace, i like this v4 engines a lot, they’re made in Köln (cologne) in the german Ford plant, they should not be mixed up with the British made 2liters v4 (made in Essex)
Saab put these German Ford v4’s in their car’s when their 3cyl two-stroke became outdated.
Fun thing much parts are outchangeable between different v4’s and v6’s, i have 1,5liter v4 in my old Saab, with crank 1,7liters Ford Taunus v4, and pistons from 2,8liters v6, (cylinders bored bigger,) it becomes a 1,8liter engine, with a lot of other stuff, this old Saab is a fun little car to drive

Thanks for the tip.

As others say, it should do fine without a gearbox, maybe i could send you an axle (incoming in gearbox) by mail? Could be good to have when you make an “adapter” between engine/generator?
If you want a more “stoneage” regulator there are to be found, lot of old military gasoline vehicles had them, for powering generators/air compressors, maybe i have one also.
These are centrifugal regulators, powered by fan-belt for example, one control rod to carb/gas mixer, one to accelerator handle/pedal.
Not at home at the moment, but i can snap some pic’s later, so you can see what i mean?

Yes, please, I have no idea how these work.
An axle would perhaps be good, I made a bid for a guide on tradera, but missed out by SEK 10.
I’ll try to get the alternator out here so I can see better how it might fit on the engine.

This discussion has made me think about Stephen Chastain’s book Generators and Inverters. He shows how he used an old Pinto engine. He shows how to make a fly weight governor.
Rindert

Saab put these German Ford v4’s in their car’s when their 3cyl two-stroke became outdated.

Yeah the Saab two-strokes has become pretty expensive here too, i’ve always wanted one, even more after i saw one at a classic hill-climb race, they had stuffed an Extreme! race snowmobile engine, piped, 3cylinder, two stroke, in a poor old Saab, that sound…

This discussion has made me think about Stephen Chastain’s book Generators and Inverters. He shows how he used an old Pinto engine. He shows how to make a fly weight governor.
Rindert

Thats a prety good engine I will grant you.
But there are much better engines.

the Onan J range for example was expressly built to do this and it does it better than most.

Continental made some good industrial engines you find in forklifts, jeeps and welders…
I have one…

In this video you see nice little continental for sale.
Next to it you see a Kubota ( d1150 I bet ).
I bet you this guy pulled the conny to install the Kub in a SA200 welder to save fuel.
This is pretty common conversion.

For a guy that wants a Chip systems I would look real hard at the Conny F 163 because there are plenty of parts for it and they are are readily available as well as easier to work on that the little Ford.
I do like that Ford I just don’t think its as good as an industrial engine. 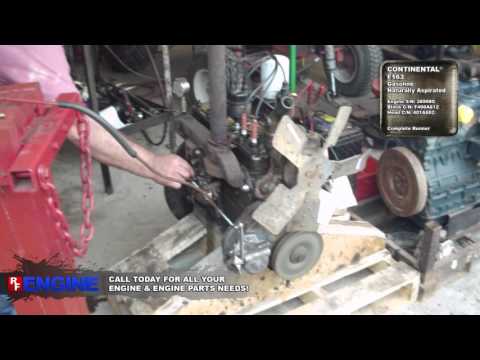 Hi Jan, here’s some pic’s of an centrifugal speed “regulator”(governor), this is an universal type from some old military equipment. The speed(rpm) is controlled via a spring-loaded lever, the regulator then works against this. 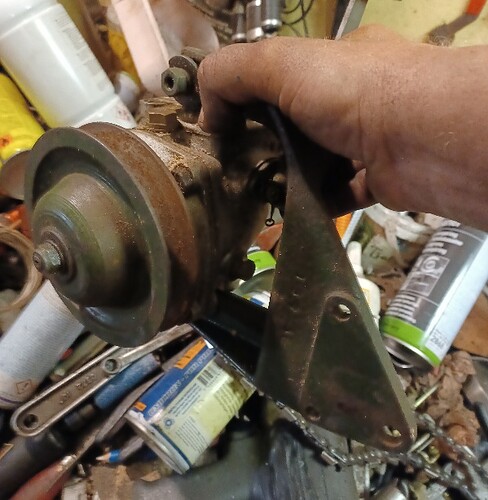 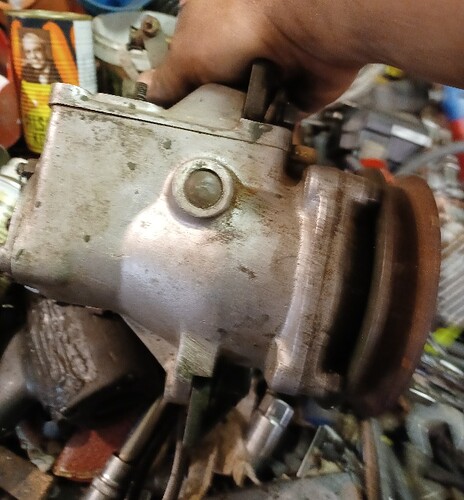 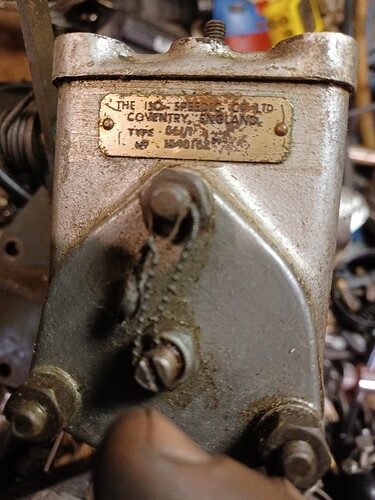 20220807_212937600×800 157 KB
Sorry to say i only found this one which i want to save for future projects, but when im back to work i can maybe, maybe, sneak up one more, i know a guy that sells some surplus stuff, last time i visited him he got 2 or 3 more on a shelf.
Anyways this should be a “jackpot” if you manage to find one, this bad pic is of a Volvo b18, volvos popular engine, Pv, Duett, Amason, only this is from a Volvo Bm combine harvester, built in speed governor, built for low rev power (1000-2200 rpm) these was also mounted in Volvo bm’s last gasoline tractor, and some military equipment. 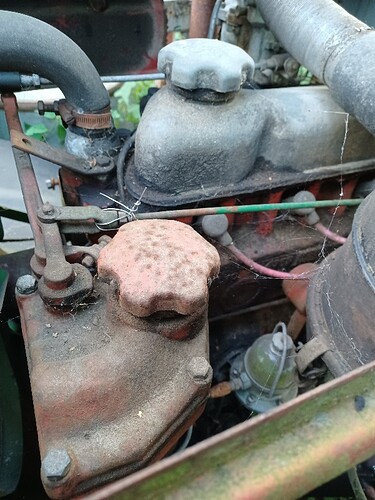 20220807_200206600×800 176 KB
If you find one of these i think it would be the perfect woodgas engine, and nearest “folkrace”-shop will probably mill down the head(raise compression) for you cheap.
This one in the pic is mounted in my project-firewood processor (with woodgassing in mind)
I got this from a Volvo bm combine for 500kronor, only problem i had to take the whole combine harvester.
4 Likes
next page →