Saw this interesting custom-built generator rig that uses a winco head driven by a transmission coupled to an izuzu diesel. Throttle down and shift up for minor/moderate power needs, keeping it quiet/low RPM; throttle up/shift down for higher demand.

Certainly that relies heavily on the voltage regulator doing its job and carefully tuning governor/throttle…but it does seem appealing to keep noise and wear-and-tear to a minimum.

Anybody out there build something similar?

Looks like someone took a tractor PTO generator and attached it to the motor. If so the generator is designed for 540 RPM. I have seen people run them on a 720 or 1000 RPM tractor at lower throttle levels before. All you do is set the engine speed so the frequency is correct 60hz and the generator never knows the difference because the tractor PTO is spinning at the same speed. I am sure this operates the same way pick the gear and motor speed that give the torque you need to keep the generator running at 60 hz.

There’s an image with the Winco generator nameplate, seems to be a 3600 rpm model.

Then it was a motor generator to start with not a tractor one. I would have to see it run to understand how they pulled that off because they have to get the nameplate rpm to get the right frequency.

That was my curiosity too. Maybe it was powering equipment that was tolerant of off-spec frequency, who knows.

Clever approach though, if it has some circuit monitoring the output frequency to automatically adjust throttle.

if it has some circuit monitoring the output frequency to automatically adjust throttle.

It wouldn’t be that hard to make a flyweight governor, if you don’t like electronics.
Rindert

Hippy, skippy right on past synchronous AC electrical making.
Make variable engine rpm, and power-input, DC. Off-shelf inverter that to a regulated as needed AC.
Better. Use a now multiple fuels possibly engine-genrator-inverter package system.
Does this all in one package.
The first should give you all of the Fab-project I-did-it, making you’d want with better end results.
The second is buy-now virtually turn key.

The reason this personal pet project is now being sold off so cheaply is because these other ways are now so much easier to manage day-to-day, and use, for not-killing the electrical consumers.
S.U.

Doing some thinking.
You might adapt a cruise control unit to use as a governor, but I see no evidence of an governor on this thing.

Doing more mental gymnastics the engine is a little under powered.
Typically you would not run a diesel at 3600 rpm to drive a 3600 rpm head, you would ,match a 1800 rpm head too the engine.
You could run it at 3600 rpm but it would be screaming and not running at the best rpm for longevity and fuel economy.

Gear box is kind of pointless if you have a pulley arangement for speed redduction.
Parasite losses in this would be high considering all the gears and belts spinning around.

Direct drive at 1800 rpm the engine might only make enough power to drive a 10,000 watt load ( hard to guess at for sure ).
Not the end of the world but the efficiency would suffer a little.
match the engine a little better ( maybe 2500 rpm is the sweet spot for full power and economy )

Just curious. Has anyone put together a gen set using one of those new cvts (continuously variable transmissions)?
Rindert

Inverter gen sets basically do the same thing electronically, no?

Good point. I never thought about it that way.

Its possible, but you would need to set the governor to the load speed and you have lot of parasitic friction losses with these kids of belts drives ( in excess of 10% )

About the cheapest way you could do this on a small scale would be with a comet 30 series like this.
Watching the video you can see how the ratio is changed accord to speed, but this is a proper torque sensitive system ( about 100 for a Chinese knock off like this one, if you look close you see the wobble in the primary clutch and of you look at the belts and stationary sheaves primary and secondary you see this is not aligned properly. Youtube sometimes also shows you what not to do or where to stand to video things ).

Inverter gen sets basically do the same thing electronically, no?

An inverter generator use a permanent magnet alternator and not some sort of field generator and regulator ( or saturated pole types… detailed explanation available by message of you like ).
So without field control you vary the generator voltage output by increasing and decreasing the speed of the engine.
Also alternators have a high output impedance ( sort of like resistance but impedance takes into the inductive losses inside the machine )
So to overcome the Impedance voltage drop as the power output increase the PM inverter generators have to increase RPM to maintain voltage with increasing load.

The best I have found is to run full power and store your power. Turn off until you deplete your storage system. An Engine that is shut off is much more efficient than an engine running at any RPM.

The inverter energy conversions I bet are much less than mechanical conversions for rpm ramping, especially a transmission.

An Engine that is shut off is much more efficient than an engine running at any RPM.

The inverter energy conversions I bet are much less than mechanical conversions for rpm ramping, especially a transmission.

Sizing is important a generator thats to big will be less efficient over all because its fixed losses are higher than perhaps a smaller unit might be.
On the other hand the fixed losses in small units are higher compared to there power output.
More simply a big unit is more efficient only if you use all that power so you had better load a generator down to its best economy and do things like charge batteries.

I meant one of those new stainless push belt drives. 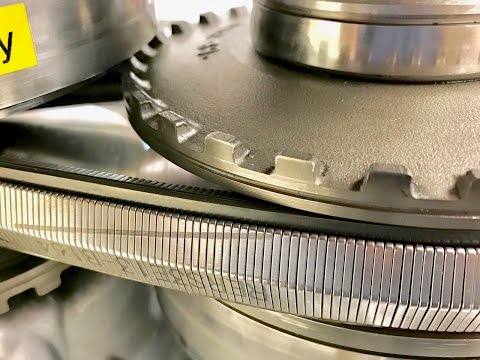 Young fellow at work has a Nissan Morono ( just like it’s owner )
He was told the CVT was a little delicate in that thing but he decided to tow a boat with it and screwed up the transmission.

There are different types of escalator brake motor
Once built bicycle powered generator from escalator motor DC motor generator .
Was connected to light bulb , more speed brighter bulb , burnt out bulb .
also made bicycle generator with bicycle generator feeding field of automotive alternator .
It would free wheel until you reached a certain speed and then you had to do work .