I’ve searched till nearly blind. I can’t find many details. On gasifiers similar to the Gilmore gasifier how did you build them, specifically the center air inlet/gas outlet pipes. Most discussion seems to be about cross fire or bottom fire.

You might try going to the ‘home’ page, it is up there in the top heading for this page, try going to the ‘home page’ and scroll to the bottom of that ‘home’ page, and you will see several ‘featured projects’, the first one listed when I checked was ‘gary’s 2001 ranger’…which might be where ya want to be, but since ya posted this in ‘small engine’ maybe there is some other project your looking for. There is also a ‘Library’ button at the top of this page, which can get you some important gasifier information.

Hi Easy, I started off with the Kalle style, got it working fairly well then got side tracked for the next several years with the Simple fire. I’ll go to the shop tomorrow and take some pictures and give you some dimensions. Please don’t go blind

I got started on this after watching the Gilmore Gasifier David Parrott videos on youtube. Ray mentioned the Nozzles for Charcoal Gasifiers thread which brought up some interesting comments by Max Gassman

“It seems like a “dogma”, that charcoal nozzles have to be put into the white-glowing char.”

“The inside of the air-nozzle-tip is best, if it is made with trumpet-profile”

“The nozzle tip needs not to be more than 1/2 – 1” above the actual char
level under the “upside-down” funnel."

I’ve been reading here and on the yahoo group for a couple of years. I have spent most of that time designing and re-designing a charcoal retort,with which I am more than satisfied. I have avoided the gassifier aspect because it seemed that a good nozzel had not yet been designed. It seems to me that, as Max implied, if you don’t want your nozzle to burn up, get it out of the white-glowing char.

IF your nozzle is of trumpet profile(doghouse/birdhouse), 8-10 charbits diameter with a slope that gives a nozzle tip 1/2-1" above the char, made of cast refractory, wouldn’t the nozzle tip be above the white glowing char and not be as likely to burn up?

I’d like to build a Gilmore Gasifier(David Parrott video) with a cast refractory trumpet nozzle to start my journey to the dark side.

It seems like a “dogma”, that charcoal nozzles have to be put into the white-glowing char.”

Who ever is looking for a perfect solution… the everlasting nozzle is not there , or maybe from tungsten ? or ceramic, or…

I’d like to build a Gilmore Gasifier(David Parrott video) with a cast refractory trumpet nozzle to start my journey to the dark side.

Build one, test some… we are here to enjoy your progress and to encourage you’r building…

every new build, every new insight… it all helps

For what it’s worth, I’m still in love with thick copper tuyeres. I have run them hotter and longer than any of my other nozzles and they show no degradation. Keep in mind that I only have about 10 hours on my MGB gasifier, so this is not a thorough long-term test. Just something to think about on our way to the perfect nozzle.

I was really disappointed when the nozzles thread was shut down. It was long, but was the best single place to go for information on that specific subject. Copper sounded like a good choice back then but thick walled copper is not found at my local hardware store.

OK, if we want something reasonably available that has demonstrated durability, then go with Kristijan’s massive steel nozzle. Maybe not available at a local hardware store, but just about any machine shop can bore a piece of bar stock for you. The principle is the same: provide adequate thermal conductivity to keep the business end of the nozzle from reaching a temperature where catastrophic oxidation ensues. This approach is obviously aided by providing adequate mass outside of the reactor to shunt off the transmitted heat. Bore a blind hole, add four vertical holes at a 45 degree slant to allow for easy cleaning, make nozzle hole closest to inlet larger and hole furthest from the inlet smaller to accommodate the observed flow rate differential.

Maybe we can rename the closed nozzle thread as Part I and start a new one as Part II? 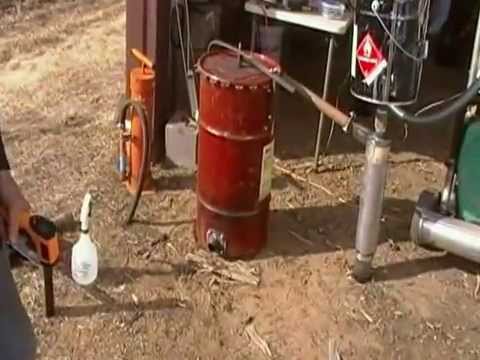 Some construction details are here:
https://spaco.org/Woodgas/My-Charcoal-Gasifier-Page.htm

You can ask George Adams for more construction details if you are interested.
(I think this video and page link have been posted here before)

Bruce Southerland; I am just an observer following along with this charcoal stuff. First; doesn’t copper have a low melting point compared to iron? How would brass work in place of copper? I understand that copper dissipates heat very well. Could you use a nozzle made out of a piece of steel/iron pipe and drive a piece of soft copper tubing through the center of the s/i pipe, let the copper protrude from the hot charcoal end, thus the copper would pick up the heat and dissipate it to the s/i pipe? The theory being to spread the heat over a larger area in the s/i. Would brass work in place of copper? TomC

Good point Tom, I have not found anything in writing on this type of nozzle tip design. This really should be looked into. Right now to me the best thing is to keep the nozzle away from the white hot charcoal. No touching it.
By using ceramic insulation, and fire brick shielding the nozzle and other metal parts. White char is way to hot! The other is to cool the white hot char down with H2O and CO2 from the engine exhaust and the others are, a little harder to monitor, are water drip, or steam…
I am using the approach of stay away from the white hot char, and exhaust to cool for now, with the help of insulation. The easyist method that I can see for my design of cross flow gasifier. A kalle style is very similar.
If the heat could be carried away faster than it builds up in a piece of metal on any part of the metal the problem of nozzles would be solved. So it worth a try.
Bob

For anyone who wuld like to replicate my nozzle, first used in the Seat gasifier. There is a important detail that must be taken in to acount!
I will explain.
The secret in this nozzle is not only in its massive wall to conduct heat away from the nozzle holes, but allso the diameter of the pipe its self! This is wery important.
Lets say we use a 1" thick wall pipe. All upper half is exposed to wery high temperature from the surroundings of the hole (nozzle).
Now, lf we make the nozzle peace out of say 3" thick walled pipe, at same reactor temperature, only maybee 20% of the pipe will be in the direct contact with the hot char. the remaining 80% will conduct and radiate the heat from the hot 20% part in to the prinary incomeing air!! Sounds familiar? Yes, this is exactly what a Wayne Keith wood gasifier does, conducting heat from where it is unwanted to a part where it is neaded, NOT WASTEING ANY.
Bruce, lf l understand correctly, your copper nozzle radiates lots of heat outside. This heat is stolen from the oxidation zone, thus hurting thermal efficiancy.
I dubt it makes a world of a difference, but hey, we are trying to make a PERFECT charcoal gasifier nozzle right

Sure you can use brass, just like you can use massive steel. But copper is a WAY better conductor than brass. Brass would need to be much thicker than copper to conduct the heat away. I picked up this copper idea from guys who do viking-style smelting of iron ores to create authentic implements and weapons. They found that a copper tuyere with at least 1/4 inch wall thickness could endure in an environment that is hot enough to melt iron. Also remember that our primary problem is not melting (our temps are below the melting point of steel), but catastrophic oxidation.

I think I may be the guy who first came up with using a core drill to bore a hole through one half of a fire brick to make a nozzle. My brother and I have used these firebrick nozzles on several gasifiers with good success. I recommend wrapping some wire or a metal band around the brick because they occasionally crack. I don’t know if water drip is the culprit or not.

Copper is so pretty and workable. I don’t know if it is a great solution, but I like it. Just don’t try to bore your own nozzles on a drill press. It once took me 6 hours to drill a 5/8" hole through the length of an 18 inch copper bar. From specialty metal suppliers online, you can buy thick wall copper pipe in diameters that slip into copper plumbing fittings, and copper is also easy to tap or die for threaded pipe fittings.

Great info and observations, Kristijan. I hadn’t thought about the efficiency issue since I was just focused on controlling the reaction temperature. My nozzle is doubly wasteful since it passes clear through the reactor with copper sticking out both ways. This double ended nozzle allows me to send EGR in one end and water in the other. It also allows for a smaller diameter ID since both ends are supplying air to my nozzle holes. It also provides a safety if I forget to turn the water off during a short stop. This happened once and the extra water just ran out the other end, instead of filling up the bottom of my reactor.

Do any of you guys have a preference for any particular type of refractory or ceramic insulation? Do you create mass to absorb heat, insulate from heat, or provide a barrier between nozzle metal and the white glowing char? Buy it or make it from scratch?

Hi Easy, I don’t have any preference on ceramic insulation, refractory cement. My nozzle is different, it is a nozzle inside a nozzle inside fire brick hole, as far as I can tell it is one of a kind. Not enough hours on it to tell if it is going to work yet. I am insulating my walls moving the hot gas through the char bed, cross flow design no grate. Just a drop box up draft into a cyclone filter, cooling tubes , filter
Bob

The only things to bear in mind:
1: slag obstruction from elevated temperatures ( molten ashes / klinkers )
2: any metal in contact with oxygen + glowing environment will get stripped down to nothing
3: melting temperature of materials…

Yup.
Here, at the bottom of this page, is the tuyere that we have used for several years to smelt iron from ore:
https://spaco.org/Blacksmithing/TMS-Smelt/TMSSmelt2012/TunnelMillSmelt2012.htm
As Bruce mentioned, the copper works because it conducts the heat away (to the outside air on the outer edge and carries some of the heat into the reaction zone on the inside) faster than the temperature can rise enough to melt it. I 'd say that we have at least 30 hours on this one, with each smelt lasting 5 to 7 hours. The way we mount it, it would be easy to pull it out if the blower failed. And yes, it has about a 1/4" wall thickness at the output end.