Picked up a 14cc head from eBay, left. The used one will get a shave job and I’ll try that one first. 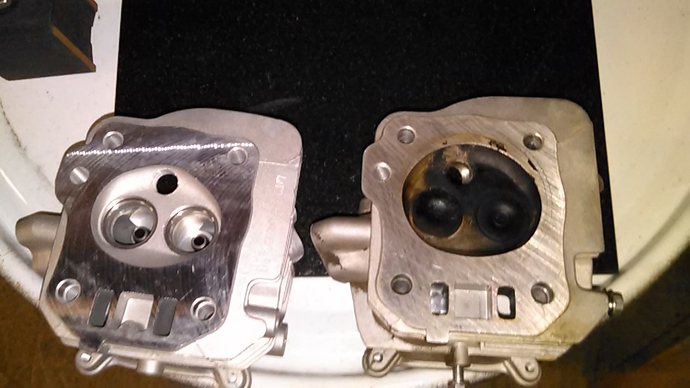 I traced the shape of the 14cc on paper then cut it out. Placed the paper on the used head so you can get a feel for the size reduction. Sure could use more time. 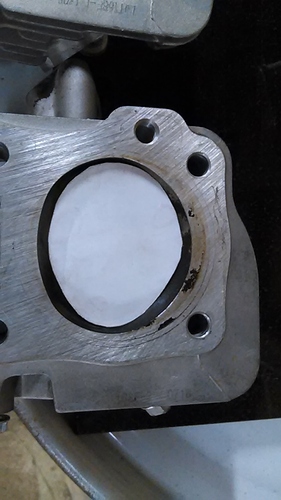 Did you ever do anymore with this?

Robert, ran out of time last year. Life gets in the way…

Now all kinds of snow removal problems. I plan to work on it before spring but you know how that goes… Going to make an easy to make depth gage.

For what its worth…

The Harbour Freight Predator 212 with the cast aluminum valve cover part number 60636 combined with the GX160 clone head 14cc yields a machine with well in excess of 11.5:1 compression.
The exact number is hard to pin down because of the choices of gaskets and internal tolerances of the engine without measuring things.

Now for your ignition all new Honda engines are using a newer CDI system for the UT2 that retards ignition at low RPM.
This can be adapted here to do the opposite.
Honda part number 30500-z5k-003
This will require a timing light and some tinkering, but you should be able to make a clone that starts without a kick back or bad habits and advances to around 30 BTDC at full speed.

Both of these modifications are bolt on with no machining required but you will some hand tools, a deep understanding of small engine repair and a timing light.

The ragged edge of clones is using the predator.
Here’s something I have been working on not related this forum. 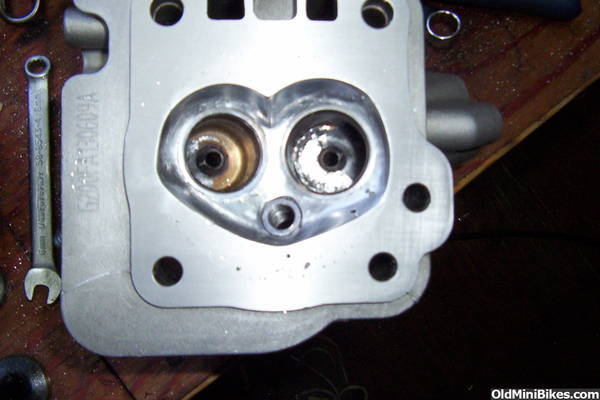 The reason I post this is there is a new generation of heads like this welded 363 ( a canted valve head ) that all come with larger valves than the older GX200 based motors used.
This might lead someone with mill here to try and weld up and mill down one of this very big chamber heads to make a better producer gas motor.
But its a lot of work…

Last week I had to go into the big town. So I took my HF clone coupon with me. Could not find the normal stack of engines in the middle of the store. Found two on the shelf with the display engines. Got both of them. Noticed the cast valve cover, reminded me of the silver Detroit Diesel series. Doubt the the cover has isolation though. The earliest that I can get back to modifying clones will be after Argos. Gotta go out and weld up my rear axles now…

Sounds like a 363.
That engine will except the 14cc clone head transplant without any modifications.
Hang onto the semi hemi heads off 363.

If you TIG send me a PM to discuss exactly how to weld on them if you decide to make up a head of your own like mine.
There is oil in that poris casting that needs to be burned out and cleaned.

I would like to weld a head up but that would be at least a year from now.

I love clones. They just fit the bill so well for me.

Here is the 363 " hemi" and the other more common looking version.

The Hemi is nothing special as built.
It requires loads of welding and tinkering to make it flow.
I have been working at one off and on for years. 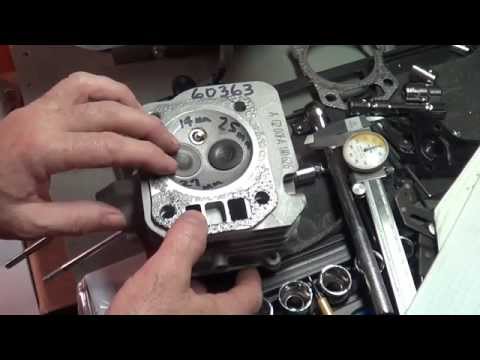 But that block with the that piston is the jewel.
Any Honda or standard clone head and cam will fit it.

SO replace that 26cc hemi with a 14cc clone head off a GX160 chinese made 5.5 hp engine and you have a huge compression increase.

This is 730 predator with its dished piston. 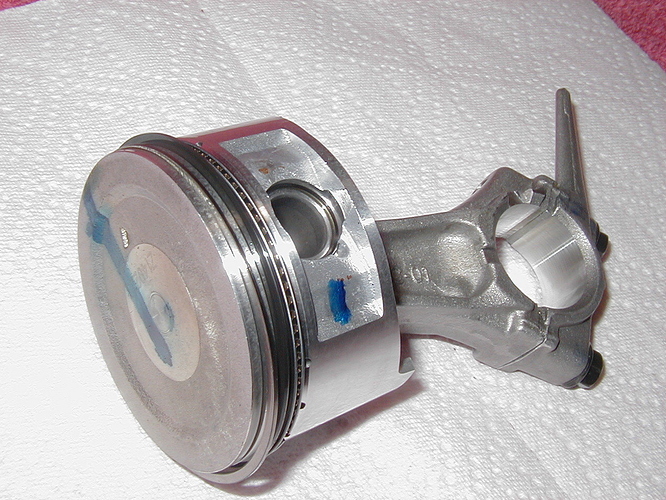 212_H_Pist_and_Rod_3.JPG1280×960 287 KB
Still a good motor but the dowel pins are larger on it so you have to remove them and eyeball the 14cc head in position.
You loose a little compression but more importantly ( to me at least ) is the flat top works with the 14cc closed chamber head to make a nice quench area for good mixing.
This is handy in an application like this with slow burning lazy fuel.

Both styles of engine use new larger valves.

If you have access too it some of the other 208cc clones also have a nice flat top pistons that will work well with the 14cc head.
But you have to watch.

I buy a lot of engines to see what’s inside and if I do not like what I see I carefully put them back together in running order and return them.
No harm no foul…

This might be Dutch.
There is not English version of this 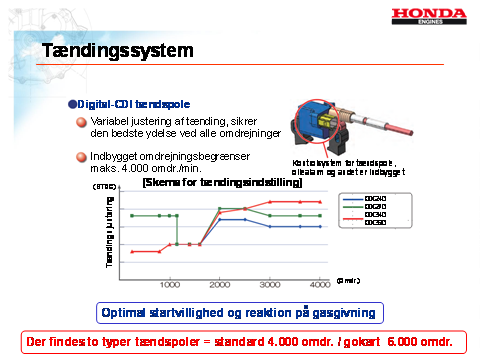 All these modules should fit the small blocks.
What you will need to do is get a timing light and remove the flywheel and key and manualy set the wheel where it works best for you with no key.

Key is just there for assembly anyways as long as you assemble and torque correctly it will not move.

Hi Wallace,
it look like Dänisch to me but very informative, thanks

Right!
Koen, I can see you brought a propär keyboard

German layout, but the typer isn’t…

But i can handle

I am looking for an programmable CDI/ECU unit, but must be affordable

Did not get reply’s from that shop on earlier postings…

I am not sure about an ecm or programmable CDI unit.
I looked into these things for racing and felt they were too complicated and expensive

I have not sent an email to my chum about you yet
Its been a while and I may have to track down a new email.
I very seldom use Honda parts since moving onto the 70mm bore clones.
There was a flood last time we exchanged email.
The whole city suffered damage an his shop was washed out.
That was a few years ago.

Back to CDI.
Just my opinion but I would use the Honda CDI unit off a newer engine and manually set the base timing with a light.
Its not fancy but all you are going to need will be 5-10 deg of advance from around 25 btdc as your base timing.
A GX200 will quite happily pull start at 25 with no ill effects.
Once you get to 30 or 32 they get hard to pull start but run fine above 3600 on gas or methanol.
I think that is the range you want too about 30 btdc as a starting point for producer gas

its something where i have to start with yes, on my to do list from now

Here’s an interesting book. A lot of the information applies to gasOline, still good stuff… 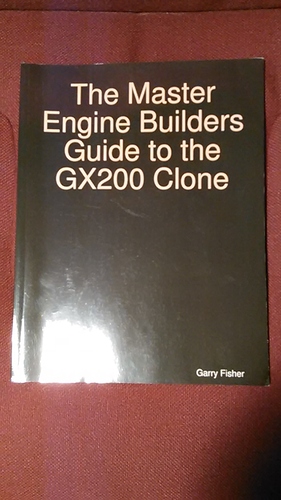 Wallace, welders are expensive. It might be possible to cast a head. I looked at one tonight, it would not be easy. A piston would be easier. Did that in high school shop class, co project with a friend.

The storm has started tonight…

That looks like it could be a very useful book for more of an entry level.

Where I have heads and blocks welded its for very specific reasons.
In the case of heads its to provide enough material to alter the shape of the ports or combustion chamber for very exacting reasons…
Where I have blocks welded it to prevent them from splitting in two or more pieces.

Why I welded that G200 head casting was to create a quench ( this head had no quench for emissions reasons ).
I also wanted a smaller chamber to and the 210FA generation 3 flat top piston.

Quench and a small tight chamber speeds up burn time and improves mixing in the chamber.
The down side to a Hemi is it is very slow burning.

I wonder if putting grooves in a head works…?

I have heard that lapping the flywheel to the crank shaft with valve grinding compound will ensure no slipping when removing the key. If the pull start is on the flywheel and timing is very advanced, pull before turning on ignition to avoid kick back which may cause flywheel to slip.