I once tried the above ( without valve grinding compound ) and the flywheel didn’t stay put. I ended up cutting a new keyway slot in the flywheel to advance the time. This was on a 16 hp honda clone .

Hi Wayne,
Not enough time to try all of these ideas. I’m so thankful for this great forum.

Wayne:
Did you have an issue with the flywheel or were you trying to alter the timing?
I don’t know why lapping did not work for you, just bad luck.

If you were attempting to move the flywheel for more advanced timing you can use this trick part to do the same thing.
Or you can file a key. id you slice .006 off one side ( protruding ) that’s about 1 deg of timing.
The also sell offset keys that work good too!

Jeff:
I heard of that head grooving, but I have never seen it done with and no one I raced with ever talked about trying it.

Wallace, some methods might work better for gasoline because vapors like to wash out of the air stream.

I do not think that Wayne lapped the flywheel/shaft. Maybe it works better with smaller flywheels. I don’t know BUT plan on giving it the old wood gas try…

I wanted to advance the time more than the offset keys would allow. I think I advanced it 20-25 degrees above factory setting.

Below is a video showing the generator running from the truck gasifier. 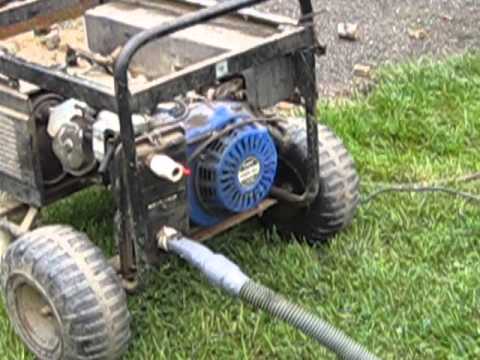 I have used a small lawnmower motor running from wood gas and used a 4 cylinder dist for running retard or gasoline and switching to the advanced flywheel ignition on the fly.

Wish I had pictures but it was long ago before I had a camera .
The below thread talks a little about this .

So I was sitting in my ‘WK Thinking Chair’. No, it doesn’t have a heat exchanger or cooling pipes. As Don Mannes, just an assigned chair to step back sit down and think. After talking to Steve U Mon night, he mentioned something about only obtaining about half the horse power from small engines. I know I heard of this before. I then thought of Wes not being able to advance his timing. I then Googled ‘ho to adjust timing in 15 hp kohler’. I fortunately ended up finding out it’s possible. My ques…

Thats a big block clone, not something I tinker work with.

BUT that Honda coil I talk about for the UT2 Honda will also work on that engine.

If you added a few deg of timing ad got to 25 I would suspect no real issues with gasoline, but it might be a little harder to start.

I am aware of that tractor pulling site.
When I started drilling and building my own carbs many of the tips I picked up from the tractor forums came in useful.

You generator sounds good on the wood gas.

I meant to add if you cut a new key you really added a lot of timing.
At about 1 deg per .006 you do the math lol.

You should get a timing light on there and see where you really are.
Also watch your head and exhaust gas temperature.
You may not hear the ping ( I have hearing loss ) but you will see the effects of too much timing as a drop in EG temp and increase in head temp.
There comes a point where the improvement drops off with more timing and you start to drop back.
But you won’t appreciate it until you careful plot this out in fuel burn and power output.

A point comes when you are causing pressure spikes that are doing harm to the internal parts even though your real power is higher than you were with retarded timing.

I am going out on limb since we don;t have any tables and test data, but 30 deg advanced is as much as I am comfortable with suggesting as a maximum.
That’s a .060 slice off a stock key and you have exceeded that by a lot.

One thing I noticed is you can never be sure where the starting point is.
Some clones are so out of the ball park they start life well under 20 ( for NOX maybe? or just sloppy tolerances I don’t know )

Need a timing light.
The ignitions on these engines are very very stable.
Once you have a found TDC and back marked your flywheel ( or pulley what ever you are using its easy to see even with cheap Chinese timing light )

This Clone is set at 25 before TDC and runs just under 10:1 compression on pump gas ( this is a stock GX200 with the flywheel and head off a 160. The 160 flywheel is broached for 25 with the stock key so its a bolt on trick for more timing. It burns 91 premium ).
Now see how easy that pull starts, you should be able to get to 25 and still pull start.
But if you increase compression you will need less timing.
Your looking at the grub screw holding the pulley. 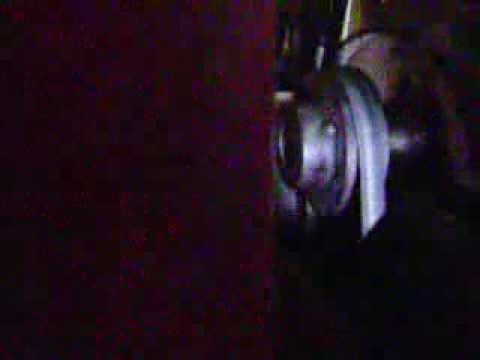 Wayne:
I can not see what engine that is.
But its big block.
I know they share a lot of parts and a stock head from a stable mate may fit that block and it may give you a compression boost.
I know you can use a 390 head on the larger Chinese 420 and 440 motors and get a compression increase of about 10:1.
If I was going to rebuild a generator specific for Gen gas I would look real hard at that option.

10:1 is a magic number it still pull starts, timing requirements are less and stock internal parts still work as long as you do not over speed them 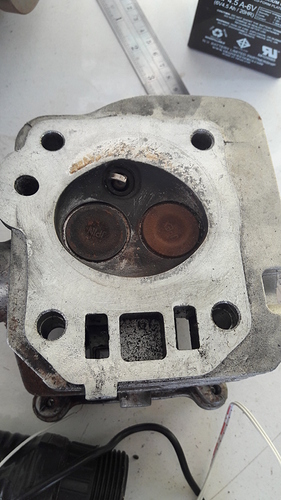 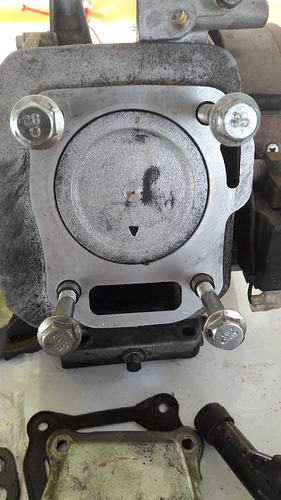 Very clean inside.
Could you take an even closer picture of the head and piston?

If you can buy a GX200 replacement cylnder head gasket that will give you a small compression increase if you plan on returning this engine to service.

How does the cylinder bore look?
I wonder how much wear you have ?

Inside the spark plug boot there is a brass threaded part that makes contact with the spark plug.
This unscrews and a small spring and button.
Remove this button and replace it with a small piece of welding rod or copper wire.
This is a RFI noise suppressor and removing it will allow more coil energy to snap across plug gap.

Is that a small triangular hole in your piston face? If so, is it supposed to be there?

The GX200 has a very very short rod compared to the length of its stroke.
To compensate for this the wrist pin is offset slightly from the centre of the piston to reduce the amount of side force on the power stroke.

In a perfect world the Small block would have a deck about a three quarters of an inch taller, but it had to be a cube shape that fit where the flat heads were installed and the solution was this offset piston.

it is a marker, but is it pointing to ? no idea where it should pointing

Wallace’s comment above explains the piston arrow marking.
So the offset piston pin is located to the correct side of the engine on assembly.
Piston will noise slap and have accelerated side skirt wear if put in 180 degrees wrong.
S.U. 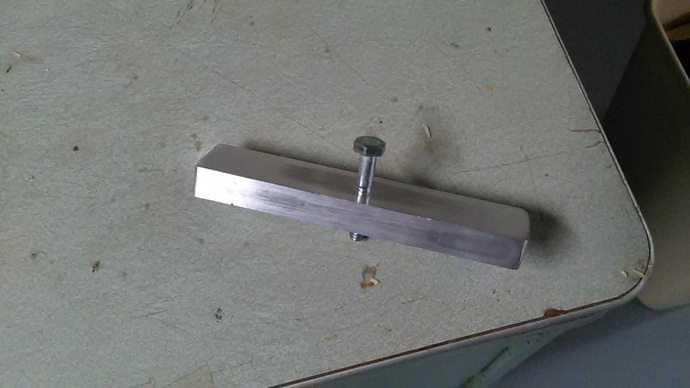 Sounds like you been talking to a fellow Syracuse NY…

Very reasonable way to go.
I draw file quite well.
You might want to consider set up a jig for the head to draw file it if you get uneven sanding ( one side higher than the other )

Garry wrote that book you posted HA HA.
Small world.
“Poboy” is something he would say.

A poboy could also play with blueing and hand scrapping. Poboy is also a song. I have the best luck with primitive tools. Slow but works…

Prussian Blue, a mirror and Draw filling is my way.
Finnish with a strip off a belt sander.
But yes its slow and steady vice work.

Garry is a great fellow I know him from years back, but we never actually met and I would like to tip a glass with him someday.
We even discussed a Clone for producer gas years ago but I wasn’t really ready to build it.

Finish off with valve grinding compound on a piece of plate glass.I’ve been told that lapping the block this same way will allow you to eliminate the head gasket. A little aircraft grade gasket sealer supposedly does the trick if the head and block are lapped flat.