Hardened Valve Seats? Yes or No?

I have an older Ford 460 from a non-catalyst vehicle, which means it does not have the induction hardened valve seats. I get mixed signals about just how necessary the hardened valve seats are on gasoline. Some say not a big deal, others say you can’t run unleaded without damaging them.

I know that propane causes valve recession. There is no debating that.

My question is, what about wood gas and valve seats? Is it as bad as propane, or is more like gasoline, or does it just not matter at all if the valve seats are hardened?

I drove an older 460 non-catalyst for a few years . Never had any issues with the valves.

If I remember correctly, everything 1973 up has hardened valves.

I’ll just run it how it is. It is a bit tedious to machine for seats, because of where water is in the head.

I would think the soot that builds up could help cushion the valve seats.

When you run gasoline I would mix in some Marvel Mystery Oil, it will coat the valves and seats. Keep the carb and intake manifold pretty clean too.

I know the issue is with micro-welding. Propane is even worse than gasoline because there is nothing to cool or lubricate. I suppose the soot would keep the valve and seat from actually touching. I don’t know what that would do for transferring head from the exhaust valve, but obviously it isn’t too much of an issue if Wayne has run it several years and had no issues.

Wayne, how many miles did you put on that truck on wood gas?

There are a lot of those engines out there DaveC. I’d start looking around for some cheap replacement heads and If you have a problem just swap them out. Most engine failure comes somewhere in the short block.

I’d do what Tom suggested. Run it as is until you have issues and then swap the heads.

Isn’t the main wear area in the exhaust seats?

I’ll just run what I have. If I need to, later on I can change to EFI heads and manifolds. It’s just annoying that the EFI heads require an EFI intake AND exhaust manifolds.

Could always use that excuse to buy some tube steel exhaust headers. Maybe some Tri-Y 4-2-1 headers to bring the power band at a lower RPM.
Or just some shorty tube headers.

Tube headers would help get that exhaust gas out a bit faster from what I understand.

Wayne, how many miles did you put on that truck on wood gas? 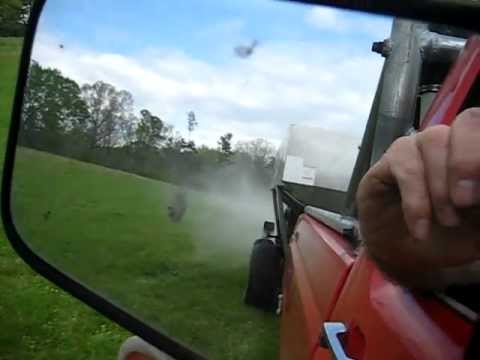 I would think the soot that builds up could help cushion the valve seats.

When you run gasoline I would mix in some Marvel Mystery Oil, it will coat the valves and seats. Keep the carb and intake manifold pretty clean too.

Prior to around 1973 all care burned leaded gasoline ( yikes ).
One of the products of combustion was lead oxides that stuck to things in combustion chamber.
These deposits prevented hard contact between the seats and the valves.

The trouble is when the lead is removed from the equation the seats tend to get a little bit if gentle scrubbing action from the exhaust valve rotors
The seats are soft iron, the valves are steel and the contact causes wear…
Eventually the seat lap themselves into the head until there is no more lash left in the valve train (this can take time with hydraulic valve lifters ).

By the time its 1973 and the EPA is mandating the use of cat converters for cars the industry knows this is going to be a problem.
Some car companies got a head of this and retooled to use hardened seats or they induction hardened the iron to resist wear as well as made improvements in the valve train to reduce wear.
Some heavy duty engines had better valves and seat before for commercial use.

Lead was bad stuff.
Lead is still bad stuff.
We have poisoned ourselves with gasoline ( really think about that !!! ).

lead is also bad for engines.
They had to add scavenging chemicals to try and keep the lead from building up inside the engines and these shortened the life of cars that burned leaded gas…

There are not many engines left that run today with soft iron seats, unless they were used very very little.
I have heard there are products to reduce the effects of wear MMO is one I hear about.
i don’t; know if it will actually make much of a difference ( many sweat by it )

MMO was made before leaded gasoline, but it offers creep lubrication for any metals it touches. Has a decent staying power. The recipe hasn’t changed since it was patented, that’s one reason why the EPA still allows it even though it increases sulphur content of fuel slightly, it was grandfathered.

MMO was originally marketed to put in early pump gas that had lead added to it, it kept the carburetors cleaned. People experimented with it and found out it’s safe to put in the crank case as well and helped remove paraffin deposits from old style motor oil. Still works on carbon deposits in an engine and intake as well. I know it’s helped relieve ticking lifters after an oil change interval of it and cleaned up fuel injectors.

It’s oil weight is about 5 if you compare it to motor oil viscosities.

So if you start and stop the engine on gasoline with some MMO, it will help clean carbon from the valves, so you won’t have a lot of soot build up.

I might try to come up with a needle valve total loss oil “injector” for running on woodgas to keep deposits down.

Techron really works at cleaning too

I can’t imagine that by 1984 that they were producing different valves and heads for the same engines. 460 was used in cars also at that time. I worked on a fleet of 50 ford trucks no cats built from 1972-86 all had over 500k miles on unleaded gas, no additives, never had valve problems.

I have to agree Al. My 1965 Oldsmobile 442 never had a problem with unleaded fuel. I did notice that when unleaded fuel came to the market that also coming to the market big time was all kinds of fuel additives claiming that there brand will protect your engine. One of the brands was lead additive for your gasoline.
I was told if you leaned out your fuel mixer to just a dry vapor and run it through your engine you could get great mileage improvements. But also now you would have a lot more heat in the valve area of the heads. Because there was more evaporation taking place of the liquid fuel that would help keep the heat down. Why they ran the fuel line through dry ice containers on the high performance engines. This also helped with vapor blocking fuel lines.
There has been always someone out there trying to make a buck on their product claims.
Bob

The removal of lead in combination with keeping you PCV valve clean and using better quality oils probably extended the life of every engine.

Not to mention spark plugs that last and last today…

was told if you leaned out your fuel mixer to just a dry vapor and run it through your engine you could get great mileage improvements. But also now you would have a lot more heat in the valve area of the heads.

Yup too lean transfers heat to the valves and block.
( fuel burns longer )
You might improve a little economy but its going to make a hotter engine.

Emissions controlled engines were very lean so lean some would over heat just idling in traffic.

Chrysler was way ahead of its time in build a lean burn engine that worked.
But the techs were nto trained to work on it and it pretty much was a flop in spite of the novelty of it.
This was ahead of its time in the mid 70s.
The computer compensated for the lean conditions with timing changes.

I almost wonder if one of these old computers could be adapted to wood gas to solve the same timing issues.