There are a lot of pork BBQ joints in this area, and there is a sawmill nearby that produces fuel for them.

The fuel is square cut hickory sticks, that are about 1 inch to the side, and between 3 inches and 14 inches long.

This stuff is pretty cheap [a trailer load is about 10 dollars].

I thought this might make a decent gasifier fuel, but didn’t know if the shape would work.

What do you guys think?

PS: My long term plan is to do my own chunking, but it would be nice to have a ready source of bulk fuel at first. One project at a time!

Those sticks cut in 2-4 inch lengths should make the perfect fuel.

I’m in the process of gathering parts for my truck
Could anyone give me an idea of how hard you should pull the gasifier under normal conditions
I’m going to build a pilot injection diesel it can stand 10" h2o and be fine.
I am building a restriction regulator and wondered where to set it
I looked on the videos but could find it mentioned any where
Thanks
Tom

The amount of pull on the gasifier will depend on how fine or coarse the char bed is. I have a lot of oak boards that have DRIED out for a couple years and need get them out of my way.

The wood chucker will splitter them if I try to cut them in small blocks so I use them in long lengths. 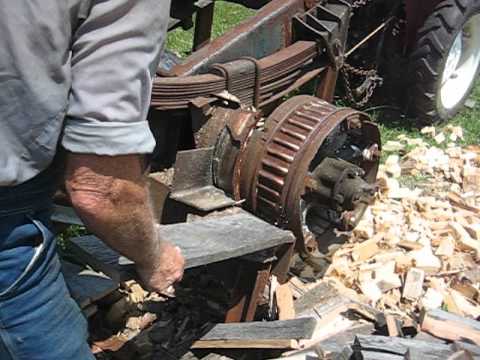 I think I could have idle down the splitter somewhat, it works faster than I care to.

The last picture is 25 miles later.