i have found today a interesting foto fiat tractor 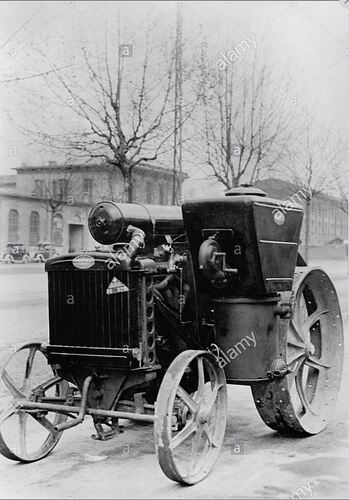 and a interesting pdf Wow! That farmer wanted to plow a field in the worst way—and I think he found it. That looks like it would be a beast to lift and turn around. TomC

i think not so…it seems good in center balance and equilibrated , so it should be not so difficult to work with the long handle…
the old constructors mostly wasnt stupid…

giorgio; Yes I can see that it is pretty well balanced. I was relating back to my own experience with a garden tractor. To keep the mold board deep in the ground, I had to stand up straight with my arm straight and pushing down on the handles-- almost carrying all of my weight. Then to turn around, I had to still stand straight up and lift my hands and the handles up to under my arm pits. Very hard to keep my balance in that position. Then with those two wheels as the went over humps it would pitch the handles sideways thus trying to tip me over. The heavier the machine, plow versus the cultivator, the more momentume the handles had to pitch me back and forth. TomC

tom, yes, often a bad soil is tthe reason for difficulty… i plow with the draft horse our field and i can say it is hard work though the plow is well sharpened and point in optimally condition also the complete plow… on our field i can recognize about 5 different types of ground, some is to plow very easy when it is dry, and the same piece is very hard to plow when it becomes more wet after rain…other parts are in opposit, when more wet, plowing is easy, when dry it is hard like cement… the same kind of ground is in the veggetable garden, but there is actually a great difference - because besides my wife collects all stones big and small and brings them away- there comes a lot of animal fertilizer, compost , ash , actually also charcoal parts from the gasifier surroundings in the earth…
this soil is a dream now and really easy to work…for the corn field is not the quantity of fertilizer disponible, so it remains how it was from the beginning despites all the stones we brought away…a lot depends on the ground…some fortunate people have a good soil from nature…

I think your wife has rediscovered the ancient secret of terra preta.
Rindert

How many acres are you working Giorgio? Do you measure in Acres? An acre is 206 feet sq. I was never able to adapt to metric.

hello tom, the cornfield is complete a half hectar ( 5000 square meters) from this we plow the half with old variety weat for sourdough bread, every year we change to the other half field…sometimes chickpeas, sometimes rye…
how much it is in square feet, i hope here are good math people in the forum…
ciao giorgio

There’s plenty of conversion calculators on-line Giorgio. Old variety wheat. I’d like a good supply of that. I heard that pasta will be hard to get here because there is a lack of Durum Wheat. What’s worse is I think a lot of it comes here from Canada and you have to be jabbed to cross the border. You sound like a very good farmer. I salute you.

I use a little black book, “Pocket Reference” by Thomas J. Glover. The Third Addition has 768 pages.
Get it at any TrueValue Hardware and others.
40 years of electronic device converters eventual failures and I quit ever depending on batteries, electronic hardware’s and software’s leaving me without.

hello tom, one also old fashioned european foot, also us roughly, is about 33centimeters…so 9 square feet should be about one square meter…
ciao giorgio

this soil is a dream now and really easy to work…for the corn field is not the quantity of fertilizer disponible, so it remains how it was from the beginning despites all the stones we brought away…a lot depends on the ground…some fortunate people have a good soil from nature…

To be on topic, that walk behind plow is just a neat, but wicked piece of engineering.

now for the quick veer way off topic.

The topsoil washed away ironically most likely from plowing, You can actually improve the soil. fallowing it does help. The year it ‘rests’ allows plants to grow and carbon to build up in the soil. I would actively seed the area you are fallowing in the fall after harvest. You want organic matter or carbon and all the worms and ‘good’ aerobic bacteria to spring to life in the area. You want at least 2 types of plants, one with a fibrous root system, that works close to the surface like a grass or clover which helps hold the soil and breaks up clumps laterally. The second thing you want is something that have strong deep tap roots to poke holes through the hard packed soil underneath where you till, which allows water and air to pentrate deeper. Which around here is like tillage radishes which are a species derived from daikon radishes, they can penetrate the ground like 60cm, and leave 2-3cm holes in the ground. You can only use them every couple of years because they are brassica’s. Sunflowers can also work. but they typically have higher nitrogen requirements, there are plenty of OTHER plants with a strong deep taproot. A lot of them are weeds though too.

The last thing, unless part of your business is the antique farming, might be to look at no till organic farming, They grow a tall grass, then roll over it with like a barrel to crimp kill it. It leaves a mat of grass on top. which is a barrier to prevent weeds, then you plant directly into it. You have to be a little careful because grass has a chemical inhibitor for some broadleaf plants like squash and pumpkins.

It is a several year process, and extra work, but you will see micro-improvements. The soil will work easier, and it will start to look darker and see more worms. You will also notice, it will hold rain water better and you won’t need to irrigate as much, and the plants will be healthier because air can get to the rootzone. It won’t eliminate the rocks, but after a few years the soil won’t be pretending to be a rock either.

It is something I have had to fight with for a long time as well.

and not to sound completely disgusting but I think someone said a human’s urine in a year had enough nitrogen to fertilize a half acre of land, which is about your fallow area, if I am following the thread correctly. There are ways to properly sterilize it. I wouldn’t do it in the actual field, if it isn’t spread evenly, it causes uneven growth, and people will ask questions. So if you choose to go that route, do it in the fallowed area, and the plants will thank you.

And on that note, I think I best stop.