Has anyone tried running a small hit & miss engine on wood gas?

As long as it’s spark ignited and able to pull a vacuum I’m sure it’s possible. Here is a link to see the old Maytag engine running off of woodgas 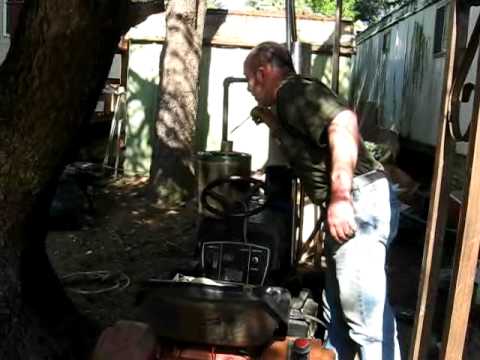 And a old Lister Petter diesel with a spark plug conversion. 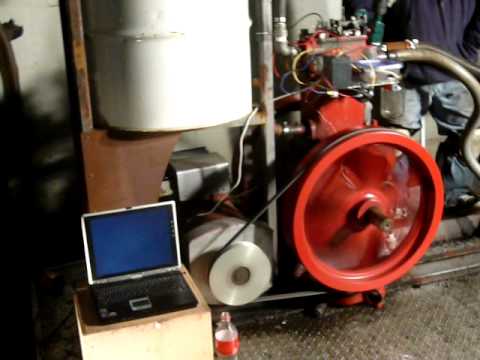 That Lister is a stout generator set when they are ran on diesel or vegetable oil. Not sure if they can produce well on woodgas. A hit miss engine should take woodgas well. Older oil well engines where usually ran off of natural gas anyhow.

That would be very interesting to see. If it is a “true” hit&miss engine, there are multiple revolutions before one engine spark. During those revolutions, I believe the intake valve is open so the engine does not pull on the gasifier and that will make it hard for gasifier to produce consistent gas for the one cycle that will pull a vacuum. Maybe a reservoir tank between the gasifier and engine would smooth it out.
At the LA Roadster show they had H&M engines on display. One turned 15 revolutions between firings. The crowd enjoyed counting out loud with each revolution TomC

As far as I know those old lister motors are low speed high torque diesel motors most peak at about 600 rpm. I looked at getting one for a tractor but never came across one that fit for a reasonable price. They will run forever.
I hadn’t give the hit miss much thought as missing because I sort of just figured it would have a load on it. But for a demo the low side demand would be tiny not sure the gasifier would like it I might consider a demo of a open cooking flame and the motor to put an even load on the gasifier that you could throttle down as the motor was put under load.

That little Maytag is not a hit and miss. It is a 2 cycle engine. Stop the video when the close up of the engine shows and take a look at the spark plug area. There are no valves at the top end. Then look where he hooks up the woodgas hose. It is at the carb that feeds into the crankcase.

I have one of those old Maytag’s and Pete is correct they normally turn several revs without fire between each fire with no load. For it to fire every time, it must be losing a lot of power. Also, those are two stroke, so if he doesn’t put some oil mist in there, his experiments won’t be going on for long.
Edit: was typing at the same time as Don.

I have an old 2 HP hit & miss engine made in 1916 by Waterloo that I’m slowly fixing up. Most all of them have a centrifugal “flyball” governor on them. Some let the engine get spark when the RPMs drop and others let the exhaust valve shut when the RPMs drop, letting the intake draw in fuel.
My way of thinking says the more load it has the more often it fires for the simple fact that you are constantly dropping the RPMs. We see them at shows and fairs doing what they are famous for…shooting cans up in the air. They can do that because there is no load on the engine and the flywheels keep the RPMs up for however many cycles before another firing cycle.
It would be neat to see one getting fed by a gasifier though and would surely be a crowd pleasure at the county fair.

They should run fine on WG, around here they ran them on natural gas to pump out the wells.

If you are talking about water wells it’s funny that you mention it because that’s exactly where I found mine. After the fires in 2012 here I found all sorts of things that I hadn’t previously seen.
Mine was sitting right next to a hand dug well that was maybe 30’ deep. No pump anywhere near it, but there was a grain mill close by.
I find all kinds of crap to bring home. LOL

They pumped the water off the gas wells, and pumped the the crude oil off.

I love to watch those old engines run it amazes me to no end how clever people where to design the early speed control and the use of a massive flywheel to balance out the power. They are elegantly simple machines that took really clever people to design.

And you can see all the parts functioning! You look under the hood of a new car at the engine, and all you see is air cleaner.