I made more thermocouples today. Here is a link to my video on youtube. 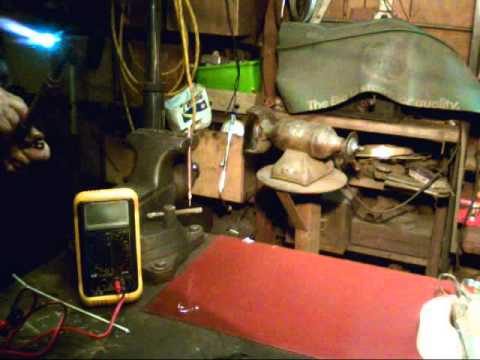 Couldn’t watch on dial-up, but I tried. Did you make a type K? What metals did you use?
John

Excellent video!
Very simple to make… This monkey may even do it

Dave, thanks. I just tested a glow plug in reverse today. In a flame measuring 40mV on a type K the gloplug put out 16mV. I’m not sure what the gp tube is made of or how long it would last in real life in a gasifier. But I like the idea of making your own tc… In my gasifier the tc on the grate is inserted into a stainless steel tube which has kept it alive for about 3000 miles at temps around 1400 F. Maybe it would work for yours.

I will give them a try after more testing. Dave, are you estimating temps by color or another method?
Don M

Dave
Very interesting!!!
Looks very simple to build will be very interested to see the results inside a gasifier.
Keep going

I was about to suggest that you guys get together. I installed a glowplug into my ash pit today and it works all right . but the numbers are really boring. While a typs K is churning out numbers like 18.2 the glowplug is just getting from 1.9 to 2.5. Those numbers work, but they are nothing to get nervous about. But if you could output in some fraction of mV then it would look pretty good. I love looking at those numbers. And homemade numbers beat all.

John
Its all well and good. While I have a proven instrument package available. If one could build there own and get the same resolution I have. Then by all means give it a go I will help if needed. Just excited to see some trying something new in the instruments world.
Sean

I can not see calibrating these thermocouples for temperature readouts but I think learning the sweet spots
of the gasifier in MV, using a multimeter, will work just fine.
Dave

Would a carbon fiber cloth work for insulation?
Marvin

Marvin, Hello I think carbon fiber is a good conductor and would short out the unit. It may work for one of the legs of the thermocouple I don’t know.
Dave

Dave
Yea, bad idea. I think it could handle the heat but forgot it was conductive.
Marvin

I re-tested my numbers, using a heat sink. The numbers were easier to record and more accurate, with this setup. I used to be in refrigeration and heating over 20 years ago. I used to carry a roll of thermocouple wire around in the service truck. I can’t recall if it was type T or type K. I worked on huge boilers at cheese factories etc. At any rate, when one would go down due to a thermocouple I would roll a few feet of the wire and twist the end and then fold it over and smash it with a hammer to make the junction. This would work fine until the factory part would show up. For our usage this would work fine in the lower temp areas like the cyclone etc etc etc … Woodgas is very corrosive so who knows how long it would hold up. Last time I priced type K wire I think it was around a buck or a buck and a half a foot. It comes with fiber type insulation on it . ML