How to clean out a propane cylinder?

What is the best way to clean out the gas from a propane cylinder, like a 40lb or 100lb cylinder.

Even heard to remove the valve and punch a hole in the other side with the torch and set it off that way?

Whats the best way so I don’t have to pick metal fragments out of my forehead afterword?

The only way I will cut ( burn ) into a gasoline , diesel or LP tank is to flush and fill and have it full of water before I do any cutting.

Also the above applies to any drum that has had any flammable material stored in it.

I’m with you, Wayne. I cut the brass valve, so no sparks. Fill it with water and make my first cut with it full just to be extra sure. I cut 7 tanks recently with no problems. It takes all the fun out of it when you get hurt. Good Luck. MikeyB

I’ve always have removed the valve, let it sit in the sun for a week or two… then before i’m about to cut it inject C02 into it… not dead yet and haven’t even had a wooosh… so it must be working for me… i did say working for me… use at your own peril

I remove or open the valve, ( make sure if you open the valve that it does open and propane come out) drill a 3/8 hole in the side about in the middle of the tank…after no pressure is coming out of the valve…take an air hose with a blow gun and blow air in the drilled hole until I can no longer smell propane coming out the valve…I then can plasma or torch cut without problem. I have done 20-25 this way as I used to scrap them…usually takes 10 -12 minutes of blowing air in to purge out the propane…this is a 20lb tank…the 100 lb tank I did a few weeks ago…I put a hose barb on my blow gun that would fit in the hole…put a tie wrap on the trigger…and let it blow for about 25 minutes.( I have a large compressor that will keep up)

I cut drums with a cold chisel. Gas cylinders, I remove the valve then use a hole-saw, sawzall or saber saw, at low speed, with coolant.

I have cut countless LP tanks with a tourch. use to build BBQ pits when I lived in TX. If you fill it with water it will push out any remaining gass.Dump out the water & the only thing that can get in is air.

Fill with water and the propane will be out. Let sit in the sun a year or so and the smell will be out…maybe…sorta…kinda…

I read somewhere that you put the valve down (tank upside down - something about weight of air and propane) and fill it with air. Do this five times.

When I get my tanks home I remove the valve and let it sit until I am ready to cut, I then do the upside down - 5 time fill. Then cut.
I use plasma or sawzall - which ever I have handy at the time. I was hesitant the very first one I cut but have never had a problem yet.

Since we’re ultimately just trying to displace propane with air, I have been known to drill a small hole in the tank and apply compressed air. Run it for 5+ minutes and you’re good. Faster, less mess. But I’ll never recommend that to anybody, it’s obviously less safe than the standard water-fill method.

Fill with water but be careful…I had one flash on me when I hit it with the torch.

I know that this is an old topic (1031 days old) but I have a sort of related problem. I was gifted two 20 lb. propane tanks that are full of propane but I can’t get propane out of them. They have this odd valve on them that I have not seen before. 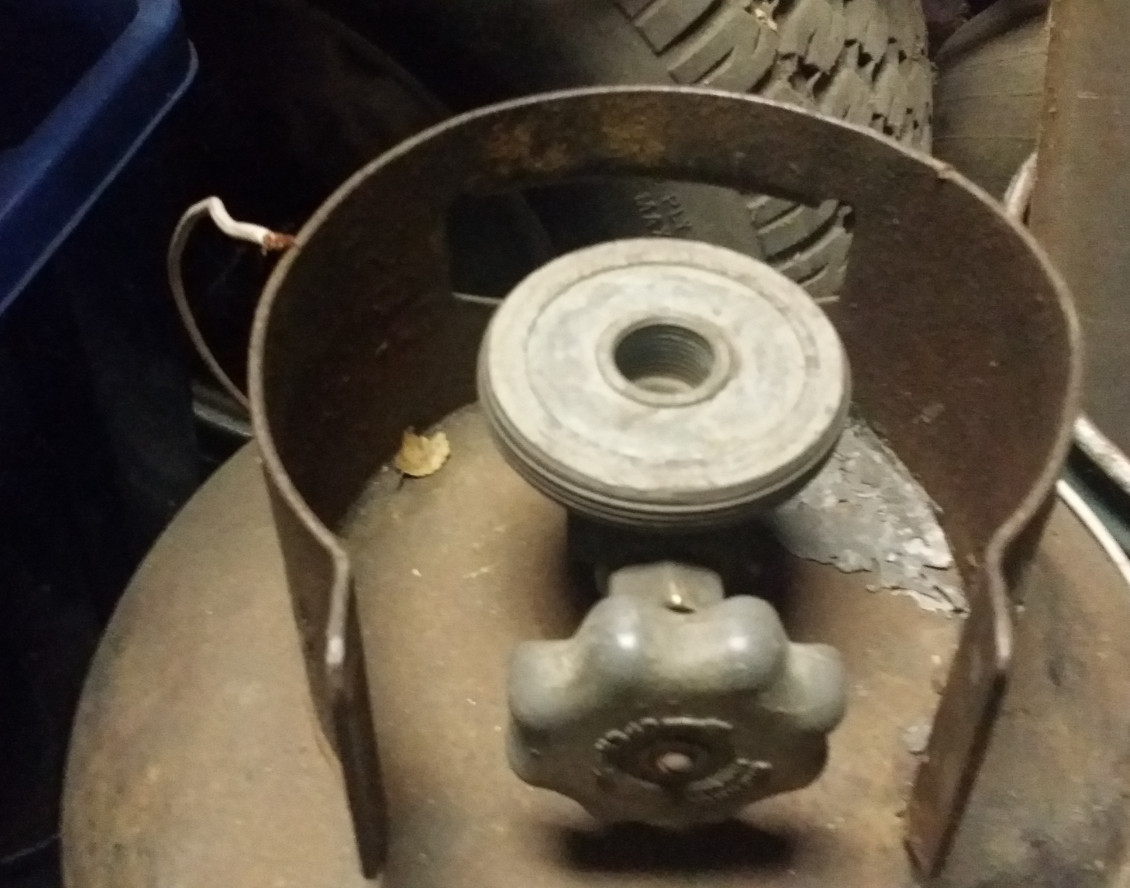 Propane valve.jpg1130×888 167 KB
The center hole has a standard left hand thread but when I screw a propane fitting into it and open the valve below-nothing comes out. It looks like a dead end hole down there but I think that the propane fitting must push on the bottom of the hole and open it up enough for gas to release. Maybe it takes a longer than normal propane fitting? I am not sure what the round flange with the outer thread is for. Does anyone have experience with these?
1 Like
BrianHWA (Brian Hamalainen (Chimacum, OlyPen, WA)) November 3, 2015, 5:06pm #13

I’ve never seen anything like that before, but if you have a local propane supplier, they might be able to tell you. Good luck!

looks like the valve for an old lead melter. the burner screws on there and the pot sets on top of the burner.

I fill about 3/4 with water. set out side in winter time. let freeze. might want to do in layers, faster freeze time? Use abrasive cut off to cut in half. have pictures some where if interested.

Don can you insert a few washers that can sit on the bottom and extend the standard fitting? You would not get a perfect seal of course so a long hose and a Burnet of some sort? Just thinking out loud…