How to creat gas from tire?

Hello every body
i am omid from iran.i am friend with saman and i like to build gasifier system and i am associate with saman in saman’s gasifier.
i have workshop and i build some industrial device. especially conveying system.
i have a question:can we build gasifier system to product gas from tire?is it possible?
Thank you
my web : http://omidomran.com/

Hello omid.
Welcome to the Drive(power) On Wood site.
If no one responds; do not take this as a personal slight.
It is just that a man-made from petroleum oil old waste tire is far, far from nature made organic replenish-able wood input stock.
Most all here are about organic fuels input stocks.
Using any urban waste as an input stock would make me into an urban dependent cockroach.
I chose to be a rural wood eating bug instead. Capable of being urban-free. A part of a natural cycle.
best regards on your endeavors
tree-farmer Steve Unruh

I don’t necessarily agree with steve’s philosophy. I’ll grab any advantage I can get! Old tires, used motor oil, horse manure, or free chipper chips. If You are the only person doing it, you will have no competition for the free fuel.
Having said that, Tires for motor fuel is something that no one has done. At least no one on this site has shared that information. So you will probably not find much help on that specific topic.
If you try it, be sure to let us know how it works.

Hi Omid, welcome. This idea can be found on you tube, a guy was taking the hole tire and putting in a retort of sorts. He was cooking it down and making a liquid fuel. If I recall he could burn the smoke gas coming off it . It did make a smell. He did not run a engine off of it, because of the tars in the gas. He was burning the smoke to try to get rid of the black smoke and smell. It was awhile back when I viewed it. He made his video in the winter, there was snow on the ground.
Bob

Wellcome!
Looks like the woodgas bug flew to Iran!

I agree with Andy.
Slovenia, where l live, is 62% forest cowered. Wood is abundant. Others from around the world may not be so lucky…
Allso, l think gasifiing a tire that wuld otherwise be poluteing the enviroment in some dumpyard is a good idea.

And, as a bonus, some tire latex is still of tree origin

I have no dubt clean, rich gas can be made out of tires!
One way is to relort it, like Bob sayd, but l think l wuld rather add shreaded tires to a charcoal gasifier hearth.

The only problem l see is shreading the tires, and extracting the wires.

For engine grade gas, and any gas for that manner, it wuld be wery inportant to desulfurise (extract sulfur out of the gas). This can easyaly be done with a scrubber with a lime solution in. Lime will atract sulfur and form calcium sulphate, plaster.

Tires don’t gasify anything like wood. So, you’ll be mostly on your own trying to make gas with them… we don’t have the knowledge base.

Your biggest challenge is the steel wires. First in cutting up the tires. Then in separating the steel from the rubber. Then after burning, about 40% of the volume will remain as useless black char-ash (NOT biochar!) This is why there are few people doing tires at home.

If you build a large enough retort you can cook entire tires down without cutting, and distill the gas into oil. This is a useful byproduct but the process is nasty, smells bad, noxious gases etc. It can be done though. If you are at an industrial scale things get easier. Large ovens to take piles of tires at once, etc. Complex filtration systems are easily justified. Also tires can be burned to directly create process heat for industrial processes.

However this is a long ways from the focus of this site, which is personal scale shaft power from wood fuel. As such, I’m moving this to the off-topic section.

The way to go, imo the only way to go, is pyrolysis.
Meaning putting your tyre or shreds into a closed vessel, then apply heat from the outside.
The higher the heat, the more gas, less liquid and carbon.
The gas is useable for engines or power generation. The black carbon is a good commodity, as is the pyro oil.

The process is similar as i make my charcoal but is not as easy to handle. 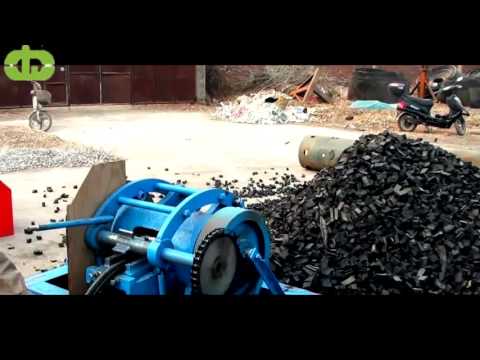 This is the kind of equipment needed for the rubber processing.

Kristijan makes a good point about the sulphur.

I have no experience to offer, but generally it seems to me that if rubber was added in smaller quantities to a charcoal or wood gasifier it should work ok and probably boost power, as members here have demonstrated with charcoal or wood sprayed with used motor oil, or plastic waste added to a wood gasifier.

I could imagine melting and sticking issues if too much is used. Just physically getting it through a normal gasifier would require mixing.

Otherwise reduction in a retort, then perhaps the remaining carbon/ coke could be disposed in a more conventional combustion/ gasification system.

I would be concerned about potential generation of carcinogenic chemicals. At least in a downdraft gasifier the intense heat should incinerate all dangerous compounds.

Plasma gasification would do it, you could throw the whole tire in too. Steel belts would come out the bottom molten with any slag. Probably a bit expensive to buy though.

Thank you so much for your guide

Thank you so much for your guide
i will make plasma gasifier.maybe it work

My first question is power in to power out ratio?

Don’t know about power out, but power in would be huge!

Hi All
As living in a very declared “Green” State of Washington located in the rubber tired vehicle population dense USofA there has been many ideas tried here to reuntilize waste-worn out tires.
Ground up for sports tracks. Steel wire gives fits. And not enough volume in sports tracks.
Ground up and made into roads paving. Ha! In summer heat these had a tendency to catch on fire and burn, burn forever. Vehicle wrecks with fires and the rubber-asphalt would catch on fire and again, burn, burn forever. Very high wear rate making for raining season, hydroplaning ruts.
They actually do make excellent roadside/stream side bank reinforcement. The political-active Greens screamed too much for this sensible re-use to become wide spread.

So in Washington State; and shipped up from Oregon State, they are collected up and used as heat-making fuel in concrete making plants. Forces air burners with exhaust scrubbers. The tire burnt ash residue added to the concrete mix as a filler. The steel wire recycled down to make steel re-bar rods.

Opps. I forgot one increasing old rubber tire use that is being used more and more here:
purpose made flooring tiles.
These are becoming used here in retail commercial spaces a lot.
Residential use now tire-rubber flooring tiles are neck and neck with increasing use of bamboo flooring tiles.
S.U.

Being a Goodyear family dad put Gdyr floor tile and counter tops in our house he built in 1940. TomC

There are/were a couple of companies using a closed retort system to make pyrolysis oil in the states.

You have to be careful with tires because of the different types of materials in the synthetic ones. If I remember correctly, there is a chlorinated polymer in the sidewalls. When it is burned it can create some really nasty stuff like PCBs and basically polluting the oil for other uses as well. It it’s similar to the dangers of using pvc.

Years ago in a town near my parents farm rail tanker cars of that derailed and leaked. Fortunately it was winter, or the toxic cloud had it volatilized would have killed people. As it was, the local people involved in cleaning up the site eventually died of cancer.

If any compounds like that are heated in a retort they could turn into some very bad things.

PVC is polyvinyl chloride. when burned, turn into PCBs which are polychlorinated biphenyls and I think it also creates dioxin. It is nasty stuff, but you aren’t burning it like you would in a gasifier, the pyrolysis occurs without adding oxygen to burn it. I am unsure what is in the goop.

That being said there are several manufacturers of plants that turn tires into byproducts, like pyrolysis oil, carbon black and burnable gases. which is similar to a closed retort system using wood.

This is a fairly decent overview: 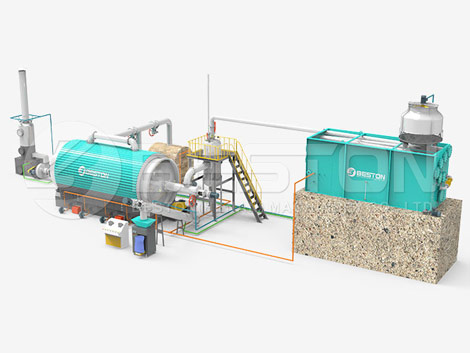 Waste tyre pyrolysis plant is used to convert tyres into fuel oil, carbon black, which is a profitable and green way to recycle tyres.

PCB’s is what was in most of the electrical transformers from pole tops that service homes , switch yards, and hydroplants at dams, to step the voltage up for transmission of power. The P.U.D. had to change out all insulating oils in these type of transformers. Nasty stuff for your health.
Bob