Hello People of the Wood Gas!
I wanted to make you aware of a friend of mine who makes powerful wind turbines. I have no financial interest here. I’m just helping him get his name out there. I do own one of his, but it is in my garage awaiting a time slot : ) 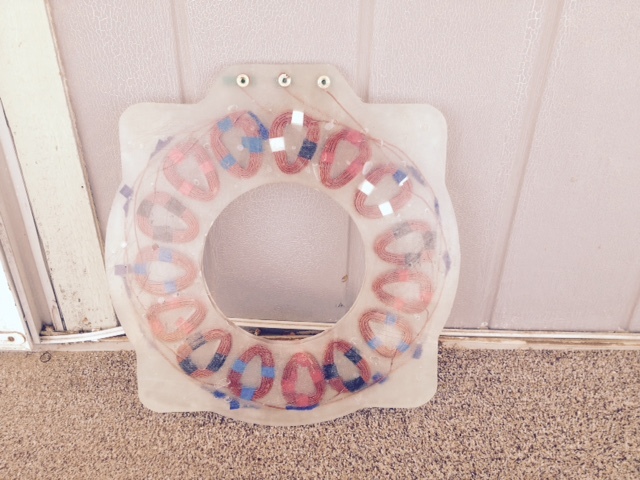 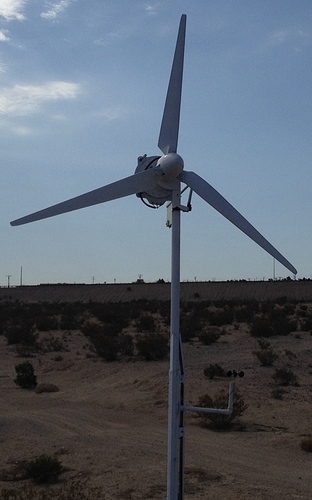 IMG_0822.JPG935×1494 490 KB
Anyway is name is Orlando Sanchez. He lives in the desert, East of LA. He is Cuban and has a passion for turbines, as we have for wood gas. He always trying something new. He and I both know the wonders of the break dancing that occurs when a spark from a plasma cutter or welder ends up in your shoe! LOL He builds axial flux turbines that routinely make 1 to 2.7 kW. These are all hand made and tuned by him. His turbines reflect the newer axial flux systems, based on one of Chris Olsen’s original design ( a cool guy who makes cool stuff : ) . The blades range from 3.2 to 3.5 m, and the low wind speed power generation in amazing. He uses the West Epoxy system from Bay City, Michigan to make his stators.

Oh yeah, almost forgot, the turbine is called the Genesys.

I’m trying to make him one of the People of the Wood Gas! I think syn gas would be the perfect match for a wind turbine system : ) 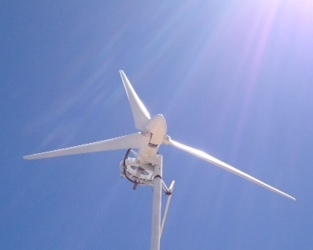 I have actually heard of those. Glad he is still going.

I was going to post this earlier because it is how to make your own from scratch, and it includes the 3-phase motor windings and they tie it into their charge controller which someone may find relevant to woodgas. 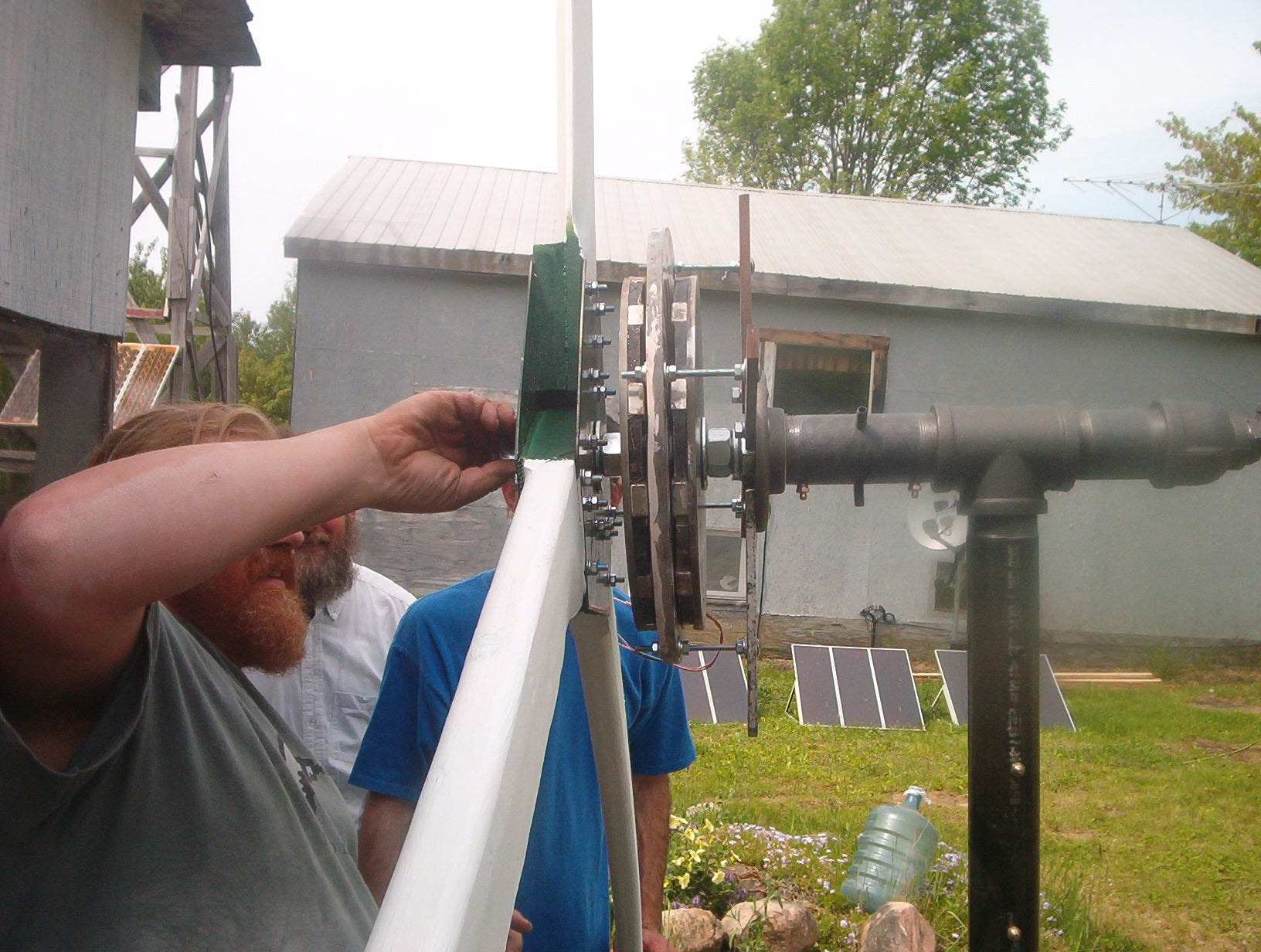 DIY 1000 Watt Wind Turbine: We built a 1000 watt wind turbine to help charge the battery bank that powers our offgrid home. It's a permanent magnet alternator, generating 3 phase ac, rectified to dc, and fed to a charge controller. The magnets spin...

On the other end of the power and complexity scale, there’s the idea of using ceiling fan motors as generators. They are small and cheap, and not hard to convert, if you have access to steel banding. The wattage is low, but even 100 watts can be pretty handy in off grid situations. Another approach could be to drive 3 on the same shaft. If they were positioned right it would provide crude 3 phase, making less of a ripple once rectified. The higher voltage would be handy for transmitting the power.

The other option is to make a generator from the Paykel type motor found in certain brands of front load washing machines. Those would be a real prize. 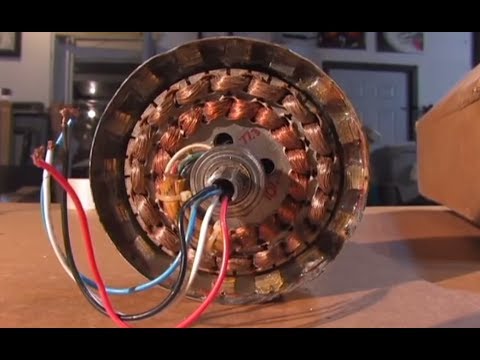 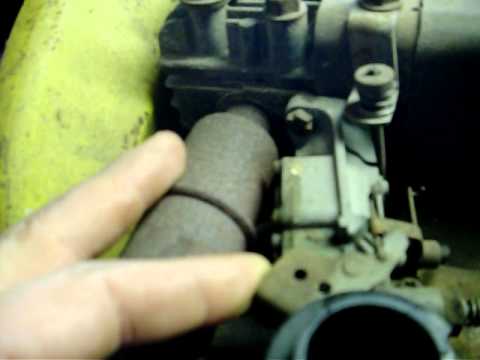 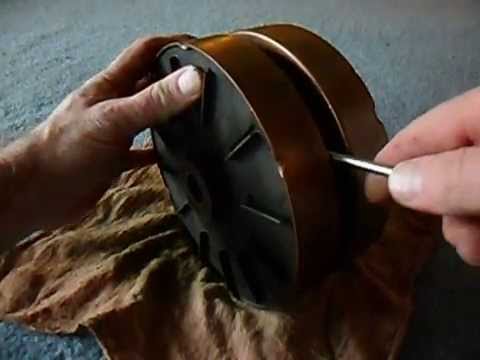 Hitby 13kw takes this out in other vidios to head-spinning detail.

Is efficiency the greatest advantage of this or are there other intrinsic benefits to this design?

To those pursuing small wind turbines, please be aware that the industry is known for deceptive power output claims. I have been burned by it personally. Always buy this stuff of MC or visa or Paypal, so that if that 1500 watt turbine is really a 250 watt turbine, you can get your money back, if you want.

Brit,
That is a beauty of a wind generator!

For those who want to build their own axial flux permanent magnet generator, as far as I know, the mentor / inventor / guru of the modern DIY turbine builders is Hugh Piggott in Scoraig, Scotland.
old web site:
http://www.scoraigwind.com/
new web site:

Much to research there, as on driveonwood.com!
I am still gathering materials…

Yes, Hugh is considered the Guru of home grown turbines. He has some lecture videos on Youtube. I have his books. Chris Olsen and Orlando Sanchez have taken Hugh’s original design to the next level. Hugh has commented positively on these newer hybrids.

I have built one of his designs. He has one or two new books since I built mine. Mine is a 8 ft swept Ares. He said it was a 1kw per Day machine my test numbers confirm that

Brit was typing faster than I

The motors from some" quiet drive" front load washing machine (LG is one) can also be used.

Building a generator can be a fun and fairly simple project. Getting a large DC motor however can sometimes be difficult. Here is a writeup on how to make a generator from an old washing machine dr…

You have to rewire them a bit and probably rectify the output but they are supposedly good. I haven’t tried. I was looking at that style of motor for another project…

Bosch and some Maytag frontloader washing machines can be contributors too. Whole series of articles from an N.Z. fellow (the same?) about doing these wind and micro-hydro conversions.
S.U.

They are all about the same(bosch, maytag, lg, samsung, etc. quiet drive, direct drive, smart drive, etc.). Fisher & Paykel was the first major appliance company to use that style of motor, and they are more or less regional down there. So they had about a 20 year head start using the technology because the rest of the manufacturers waited until the patents expired… Which means people in NZ and Australia had about a 10 year head start on scavenging the appliances…

They look very similar to the hand wound coils you see on some of the wind generation sites, and supposedly can put out fairly high voltages without much problem. (I don’t know about amps…

I have very little knowledge about this subject but was wondering if e-bike rear hub motors would work? ever hear of anyone using one? I modified one to be oil cooled and could run 3500watts through it continuous to power a bike.

I just picked up a treadmill motor as they are dc permanent magnet motors with encoders for another project.

I wanted to throw it out there as an idea namely because the motor isn’t attached to the bearing, kind of like a drum brake. The also output AC current which is more efficient like an alternator and you are able to run AC longer distances without as thick of a cable because of the resistance differences. (Pulsed dc current is similar which is used in high voltage dc power lines.) however it is 3-phase output so you need extra wires.

This site actually goes through the rewiring, rectifying and such of the motors.
http://www.yourgreendream.com/diy_fisher_paykel.php

In the end, Obtanium always wins. 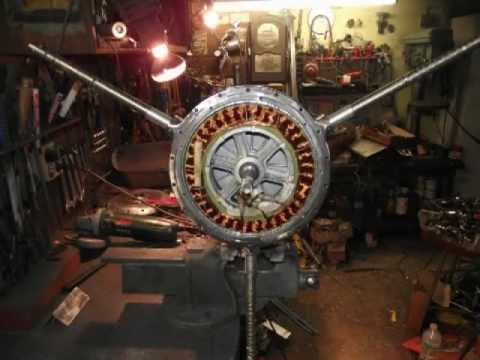 also check out his recumbent bike videos. A bit on the wild side, but good clean fun!

Obtanium is great for saving $$. Practicalium is another option for ensuring you get useful power. It utilizes a wealth of published data that is available. Practicalium has good characteristics that have been tested with predictable results. It is more resistant to those unstable isotopeslike “nevergotitdunium” or “Whatheheckisthatium”

Interesting topic. I would like to submit this information for consideration.

Installing a small wind turbine? Get the information you need for an informed decision: The good and the bad, just the literal truth to help you choose.

I like the idea of wind power, but the information provided by this outfit that deals in wind power generation is hard to dispute. I would still give it a go, but it seems to be a marginal power source. It could fit a power generation scheme as a supplement (wind may blow at night, or when it’s cloudy), but for most applications it isn’t going to perform very well. Also, blade geometry, high wind furling and overspeed protection, maintenance access, and lightning protection make for complications.

If there’s access to any amount of flowing water, the same generator will provide far more. I could get by well on 100w constant power, versus an occasional 1000w peak.

Solar electric, and direct solar thermal are probably the most practical for most situations.

Ceiling fan motors converted to generators are the other practical approach, (though I want to get my hands on some of the Paykel type motors), and will have the same advantage of ac transmission. I don’t think there’s a cheaper, or more available generator for low rpm power.

A savonius style Vawt out of a 55 gallon drum works at lower wind speeds closer to the ground and handle changing wind directions easily. They aren’t as efficient but work more often. I haven’t figured out what you need to use for bearings, but Obtanium for the rest of it is pretty straight forward.

I haven’t figured out what you need to use for bearings,

Car wheel bearings seem ideal to me since they are good for side thrust and axial loads. I agree that for many of us the old savonius rotor is good. It is not as effiecient, but the payback time is minimal. you can just add a few more of them if you need more power.