Is that barrel safe?

Hi All,
I have made sure to wash all barrels and containers to remove toxic/explosive materials, let them dry and weld/cut them feeling safe. Then I ran across this video. This will blow your mind. Well, hopefully not! 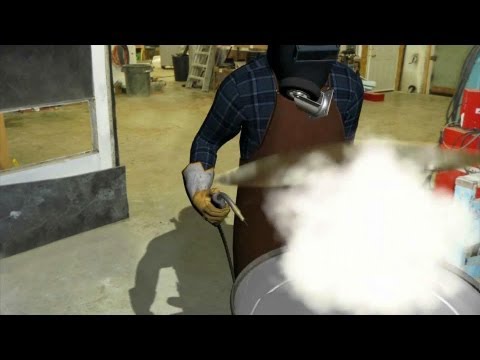 Notice… “he replaced the lid’s bung caps” before welding. This was his (fatal) mistake.

With large enough openings or vents for the gas to escape, no pressure would have built up. Most likely, he would have a jet of flame come out the bung hole. If the bung was too small, the drum might have still ruptured, but perhaps not with deadly force.

Best practice before cutting or welding a closed vessel is to fill it with water. Leave it full, while making the first cut. Once there’s a large enough opening to put your hand through, you can drain the water safely and continue cutting or welding.

AGAIN, if you have a barrel with bungs… why in the world would you put them back in before welding?? Even water turned to steam will burst a closed vessel. Leave the bung off, let the vapors vent!

I may run up the water bill a little but I will not cut or weld on a drum ( or any container ) if it is not full of water.

I once wanted to make an oil drip heater. I attempted to solder a small brass valve to a 1 gal can which had previously been our gasoline can. I was very careful to fill the can up to within 1/4" of the top so I could heat it with a propane torch and solder. when I got close with the torch, there was a large PUFF that bulged the can! Thinking: “Well I’m glad I got that over with.” I lit the torch again and it gave the exact same result. I was lucky to have only ruined the gas can. I gave up on the oil burner!

Works pretty good to run an exhaust pipe from a running vehicle into the container. Hoss tells me he has welded & torch cut 500 gallon gasoline tanks reeking of gasoline this way. Personally, I would be too chicken to try it. But, he swears by it.

Hello fellow wood gasers.
The safest method of welding on a tank is having the tank filled with CO 2 .
Next method is steam the barrel for about an hour , making sure no water remains in the tank well steaming or the metal under the water won’t be free off fumes.
I also had run car exhaust in the tank for about a 1/2 hour then weld on it , did quite a few and then I had one lite, just a gush of air come out I never did another that way.
Welded tanks on machines as long as your welding 6 inches below the diesel fuel level.
Same when using water weld below the water level.
5, 10 & 20 thousand gallon tanks we used to steam them for days.
There is no 100 percent safe method.
Calvin

My method, before welding on tanks…

Making sure i have 2 large hole’s, using a jig saw…
Then light them inside with newspaper

The exhaust is nr 3

If it has contained flamables, then make it do “woosh” before it “wooshes you”
Valuable lesson from my grandfather…

I have had a couple of surprises when cutting on tanks. One was a VW g;as tank. Filled it almost to the top and had to put the gas cap on to keep the water in. The water boiled rapidly and gave the tank a “POOP” that knocked it off the saw horse — scared the Peedabbers out of me
Last month a guy brought a 55 gallon drum for me to make a fire barrel out of. I tipped it upside down and drains out most of the liquid that remained — just a quart or so. I gave it a good smell test to try to determine what had been in it. It smelled like “swamp water” thus my conclusion. I got the torch out and was about to cut when I realized I had replace the bung plug. I had a second thought that I shouldn’t have done that, so I took the time to remove it . Before I cut I thought I would pass the flame over the bung incase there was some small amount of something in there. The next thing I knew I was standing back about 5 feet from where I had been and torch was out and the barrel was rolling down the driveway. When I got to the barrel, both ends were convex as far as they would go.
I have read all the suggestions and quite frankly at this moment I am not feeling “warm and fuzzy” about any of them. I now like open top barrels much better for fabricating. TomC

Half cup of baking soda and the same amount of vinegar…

I’ve never had a problem opening up propane tanks after I’ve put that in them.

I think all of us here have a close call or two with something we were working on. Fortunately we still have enough fingers to type
; )

Because we are DIYers. our risk goes up for injury. Maybe we should have a “Safety Section” dealing with the hazards of wood gas.

One of the hazards that I have run into is welding in high heat or working on something. Sweat gets in your eyes and you can’t see. I now put a small microfiber towel on my head before welding. Welding caps are fine and I have them, but microfiber absorbs a lot more sweat. You can hide them under a ball cap too.

Maybe we should have a “Safety Section”

I did move this to the “What not to do” section.

Twenty years or so ago a local fellow that I did not know was killed by a tank exploding during some sort of cutting/welding. To say I am cautious would be an understatement. I have only cut open a few things but I have settled on total water displacement of the inner space, bung uphill, water flowing out of it before the barrel is pierced. I would comfortably dump gasoline out of a container and weld or cut it almost immediately if I could overfill it with water first.

I have used the same on my propane tanks, Arvid, works fine.