Making charcoal... the way i would love to do it

Check out how ingenious they are doing the charcoal thing… 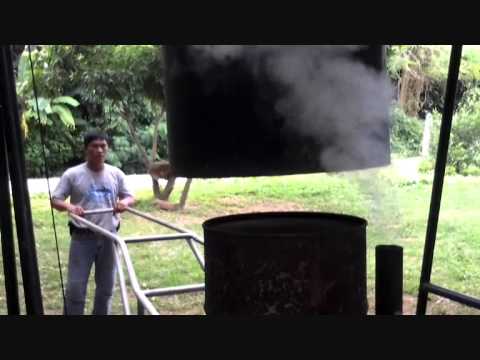 Thanks for posting. I’m thinking about something on the same lines but maybe I need to rethink it.

So did i Jeff, i saw their work… and now i am rethinking my idea i had…

What was that glassful of “tea” at the end of the video?

Sure would be nice to know what the subtitles read.

Don, Bill, the subtitles was about the condensates , tar and wood vinegar, the last cup is filtered but i presume its not drinkable…

i will try to find more info on them, but i loved their work, how they did make it simple…

pretty cool, good to see the heat being used. I still like Wayne’s way the best put the wood in the truck or tractor go do some work, come home and the charcoal is cooked and sized, ready for whatever your use may be.

Always interesting but many questions. First they put hot char down that hole before sitting the barrel of wood over it. Am I correct that they had to keep supplying wood to that little fire to keep the process going? Second, it seemed like when they opened the barrel with the char in it it was almost full. My experience is you only get about 1/3 rd the amount of char compared to the wood you put in… Where did the collect that much tar. Amazing what people in other countries can do with so little. TomC

Tom,
yeah, its also the simplicity what i likes most…
The wagon to hold, move or tilt the barrel…
The amount of charcoal coming out of the barrel looks to be an optical illusion.

i surely will try to figure out more on the details

probably the exiting gas could be fed in again ?

This set up is designed to obtain wood distillates with charcoal and heat as byproducts. Fine if you want the distillates, but I’d classify it as a slow method if all you want is charcoal.
The inverted drum filled with wood is place over a base and sealed with sand. A larger drum is lowered over it to insulate and keep the interior drum hot. In this base is a hole that contains fire. Its purpose is to heat the wood in the drum to the point where it can self pyrolosis. There is a door on this hole (located underneath) where more wood can be fed in should more heat be necessary to get the reaction started. The other hole covered by the wood filled drum leads through a pipe that is immersed in water. This is what the two blue drums filled with water are for. To condense the wood smoke. The condensed material is collected in a pot while the uncondensable component of the process is flared off and use to boil water.
The condensates are primarily three components. Precipitated tar (thick and black) wood vinegar/wood methanol, and water/oil. This mixture needs about 6 or more months standing in a vessel to get the wood vinegar/wood methanol to settle from the water/oil and more tars. This material is then used in various doses on plants. A 1part wood vinegar to 200 parts water helps make thicker leaves. A 1 ; 50 ratio can control nemetodes in the ground. The Thai’s are starting to use this material more as are the Japanese. It is also a product I am interested in and have done some research and experimentation with,.

The other purpose of watching someones work, that they share, is called learning, learning how things also can be done…

Sometimes we already have ourselves a good understanding about how things work… and then we see the work of others, giving us an even better understanding…

As to the video, i am thinking of installing the flare, pointing in the space between the barrel and the dome, heating up the content of the barrel…

I like the techniques of handling the barrel using the special cart. My charcoal making (160 barrels so far) has evolved to where the barrel containing the wood is lowered into a large hole about two feet deep. When the chimney barrel is mounted, I can feed small limbs of thorny invasive brush (Mesquite & Huisache) on top of the load of oak or cedar being converted into charcoal. (Almost like what is done with a cone kiln.) Pulling this barrel out of the hole later is not an easy job. Once again, our pastures are dry, so outdoor burning is on hold, except in my outdoor kitchen on the cement patio. The TLUD stove running for an hour cooking and boiling water generates over a gallon of charcoal per session. In the video, I noticed the holder for the pot of boiling water which seemed to be made of a mixture of Portland Cement and rice hulls and ???. (ash?) In another video they showed the construction of a large number of charcoal burning stoves made out of the same material. Do you know the recipe for this material? It did not seem to be cracking… Very interesting videos, and even some with walk-behind two wheeled tractors. My Dad built several of these in the early fifties and used them in a large home garden. Thanks for posting.

The process in the video reminded me of the old upside down barrel in a barrel with a flue pipe method. I think we might be able to combine these two direct and indirect methods.
Fill the smaller barrel with dry feedstock and install grate (3/4" expanded metal with a couple of rods might work for the grate.) Put a brick under the bottom edge to slightly tip open. Build a kindling fire under the grate. Cover with larger barrel supported by bricks to provide air gap to combust pyrolysis gas. This larger barrel has a flue pipe. Use a fan to increase the temp of kindling fire to initiate the pyrolysis, then pull the prop from under the inner barrel.
By ganging two of these setups side by side with horizontal stove pipes and dampers you can use one retort to start the other. With extra small barrels this back and forth process can be kept up for non-stop production. This back and forth method is actually in use in some commercial kilns.

On the pipe going through the water in the barrels, won’t that get solidified with creosote? I built and outside furnace for the house. Instead of just running the chimney straight up, I turned it and ran it parallel to the heat box. That way it stayed in the water giving up more heat. By the end of the season, that part of the chimney was totally closed of with creosote. I had to drop my welding torch into the chimney and get the creosote burning, then run a pipe from my air compressor down to feed air. It would have the water in the boiler, boiling by the time I got it burned out.TomC

Not as fancy but interesting.

The drum reminds me of a method I saw in some technical papers from Japan.

Belated Thanks Jeff. Had a hard time figuring out where they were from. I think I narrowed it down to Myanmar (Burma). Not sure though…labor intensive, time consuming. Very “un-American”. hahhahaha… Good vid…

By the way, I love the bamboo chimney/condensors…

Hey Gary, you said you did more research ion this subject. Any pointers where I can find out more on the uses and specific applications of this substance agriculturally. ?

I used to use it and it worked for me. The down side, for me, was that it was short lived results. Kind of like drugs. That meant more work for me. Making, spraying, storing and etc. I ended up focusing more on the soil so that the plants do more of my work. But your mileage will vary.