1986 Audi 80 did have almost none electronics “complicating” the woodgas application.

The ample “natural” char & ash insulation around and below the hearth keeps the idle at ~800 RPM for 10 – 15 minutes before it starts declining. But tramping the gaspedal for 15 seconds, brings it up to “hot performance” again.

Longer than 1/2 hour idles need light stoking of the lower silo to clear bridges before a take-off.

Fuel = 2 X cigarett boxes (flat on each other) or a single,
a half cigarett box, and for road performance egg size.
So far, motorway (main road) speed 110 km/h.

NO GASOLINE ON BOARD! 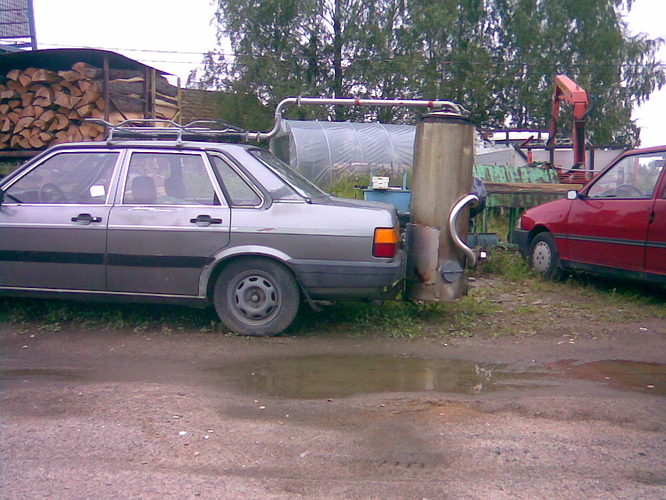 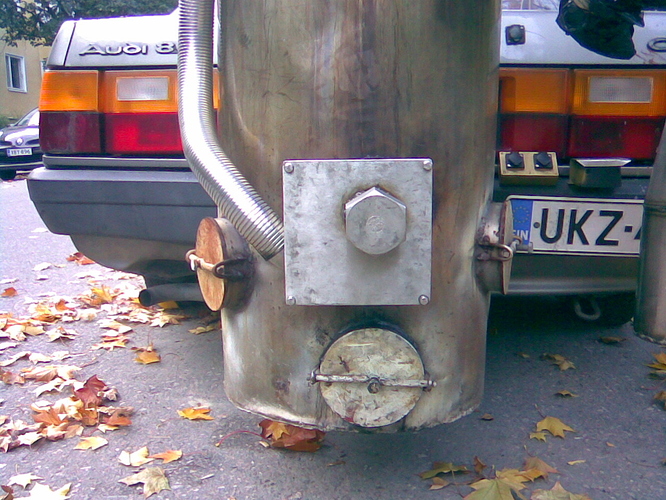 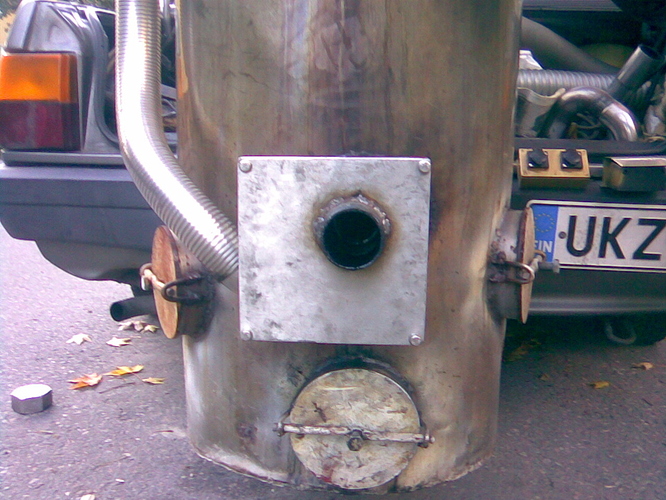 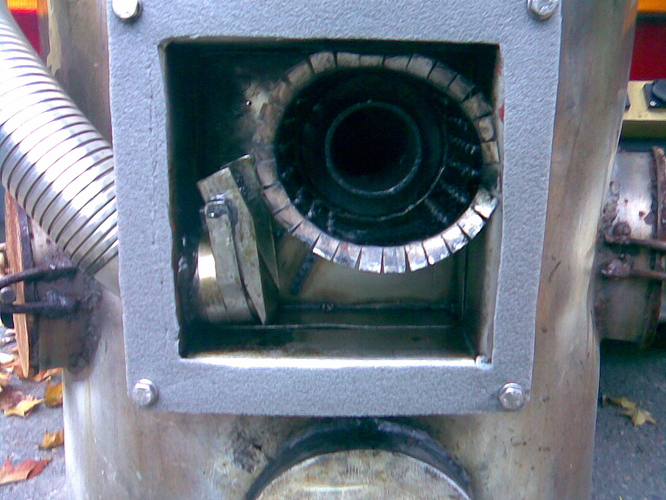 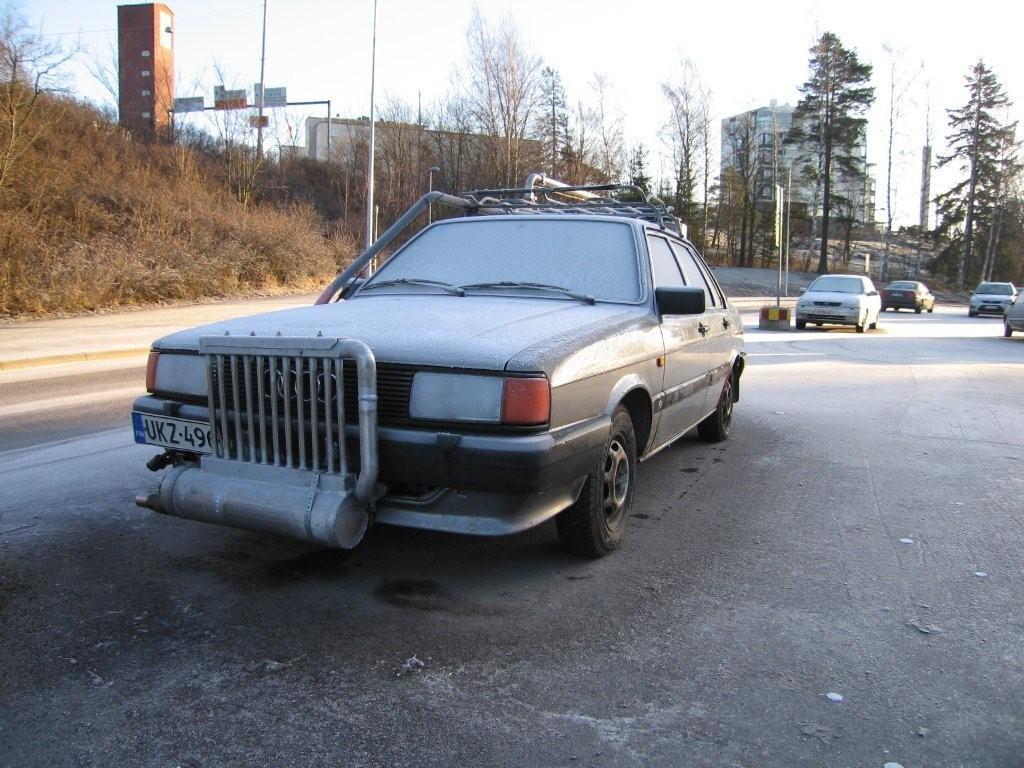 I hope Tom will draw us a beautiful sketch (Interpreter)

Nice to see your build! It looks like you have lots of km in that hopper.
I like the on the roof cooler.
How come you only use 4 primary air nozzles?
You have a fixed grate on there?

JO, looks like you have found a ideal engine for woodgas. The 0-100% petrol realy helps you. With my type of fuel injection l always consume some petrol as long as the lambda shows less thain 0,5v. But l have found the amount is realy small at WOT, but quite considerable at low throtle position. This is the reason l hate city driveing.

I am orientateing on the lambda for the A/F ratio. I think you culd too, but the real question is do you need to?

There is no cooler on the roof! It’s on the “nose”.
The “grate” is the described perforated sieve-plate 50 mm under the “bell”.

The newer components are not assembled jet.

I hope Chris is relocating this “massinvasion” to another spot?

Sorry for the “invasion”!

We sure would like to see some more pics Max!

Here’s a video of Max and his Audi from a few years back. 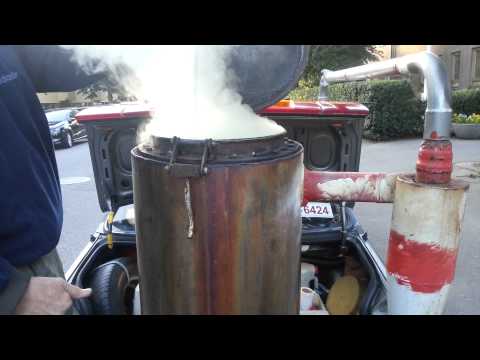 Thanks for the pics and video

Max,
Is the cyclone the only filtration?

Max ,thank you for the additional pictures. I see your air intake and ash dump. The two large ports on the sides, are they for grate and nozzle service ? Your gas must be pretty cool by time it enters the engine compartment, is it reheated there before going to your cooler out front ? Do you have a condensate catchment on your hopper? or cyclone ? or nothing till at cooler in front? Sorry for so many questions all at once but I have been wanting to see your set up for a long time . Thank you.

The original installation had no cyclone and no proper condense tank under the cooler… no stationary blower … no “social box” with back-flap and ignition grill.
You could not open the trunk-lid more than the half-ways…

The two side lids are reaching outside the heart lower part and to the sieve level. (qvasi-grate). Not to nozzles.
There is no gas reheating, constantly decreasing temperature and saturated dampness after the cooler, filterdisks are wet.
The cyclon and delivery line keeps hot enough.

Open-cell foam does not freeze solid, fluffy as ice-cold.
Extra down drainage from the filter bucket.

All fuel humidity has to pass the hearth; therefore the tight and “furious” measures! The reduction and insulation char is ample. Needing a manually sieving grate later.

Later, when roof-filtering, return to gasifier extra mantel for reheating and heated paperfilter.

Aaah, so much fun happening while I was asleep.

Max, I stumbeled over that video before on youtube but never realised that was you an your car.

I’m curious too: Your gas outlet his high - do you heat the wood old Imbert style? What about hopper condensation? What’s the purpose of those fingers in the air tick-tack valve compartment?

Nearly all Imbert types are double-manteled, so all fuel humidity has to pass a furious hearth! This one too…

The flap-side-edges are bent 90 degrees (vertical line) to make it immune to bending; at the same time the upper ends of the bends have drilled holes for a thin (1mm) hindgeing pin.

You see a little blank point, that’s the end of the pin!

Around the incomming 60 degree curved bend, there is a “spanner-band”;
the left part of it has a spanner-screw (partly hidden), uppermost high.

The right part of the spannerband is split from the rest at “midship” hight of the 60 degree tube, facing straight upwards.

These upwards facing “struts” have corresponding 1 mm holes drilled in the upper end.
Syncing with the flap holes.
The 1mm pin connects the struts and the flap-side-bends.

The flap is 0,5 mm SS sheet, light and tight. Everything else is also SS.

I think JO was curious about the “crown” at the ait intake, next to the non return flap. And so am l.

My thinking is this is to catch glowing char in case of a hopper puff, but this is just a guess.

I see the filtering bucket now. Do you allso use a automixer and twinflap gas dispensor?

Such pictures and descriptions are so inspirational, my hand is eaching to grab the welder and start converting my next engine to woodgas

Hi max i did not reconize the guy packing the hopper,was that you or the guy running the vidio devise. Nice vidio watched it several times before knowing it was yours.

Max, Thanks for the Audi post, very nice, loved it, gives me inspiration. I just need a volunteer vehicle now.
Pepe

Max, I used a “mantel-heated” hopper in one of my earlier builds. Although not the reason for discarding it, but when I removed it, I found that a lot of soot was built up in the mantel and would have been a problem had I not abandoned it when I did. If you get soot build up in the mantel, how do you handle it? Or if you don’t get soot build up, what are you doing that prevents it? TomC

I am sorry! On the outset for woodgas: There is no woodgas without a rich soot production!!!

In the service notes for Imbert gasifiers there is a clear description of the one year service and other short-time maintenance obligations!

Rising up the inards from the outer shell makes everything available for easy cleaning.

I need not add anything else, do I?