Arrived for playing around with a charcoal gasifier…
This one can only run on straight gasoline, carburator, pump and fuel hoses are gone from the ethanol in the fuel…
work to be done, but feels as a fun challenge… 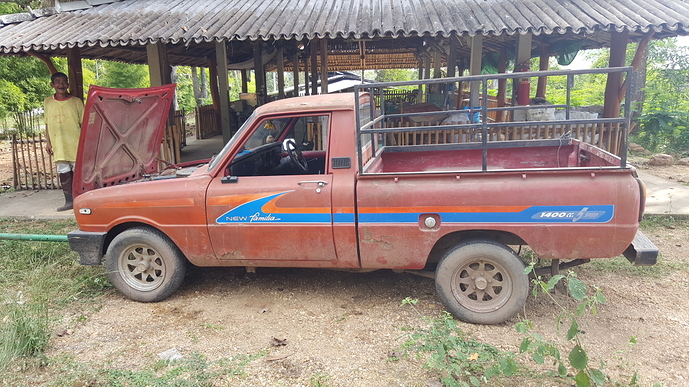 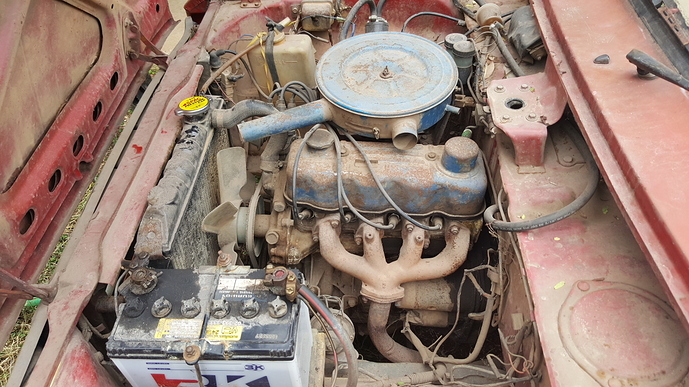 Interesting project. Is that roof in the background made of split bamboo poles?

Yes it is made from bamboo stems/poles

That’s the size vehicle I an looking for. We needed straight gas for the club Cessna, too. More expensive than the doctored octane, too, but engine failure at 5000’ over the Adirondacks where the only clearings were usually ponds or lakes. Just scary thinking about ditching in the water!

Any progress on the Mazda?

I have a collection of B2000 and B2200’s great trucks to work on, in fact amongst the easiest, and great functionality.

I see you are involved in more substantial projects, but this one has particular appeal to me.

Also I am keen to see your design approach meant for small displacement engines. - Charcoal, I’m sure…

Why, do you prefer, mazda trucks and not toyota or North American ?

I believe the Toyota trucks are very well built, but I can’t say if they are easy to work on. The Japanese had a very good design approach in their vehicles, it appears that vehicles designed for the Japanese market were built with fairly standardized parts, brake master cylinders may swap between different vehicles, it seems there was high level cooperation and design effort between various manufacturers.

The 1986 -1992 series of Mazda trucks were built for the Japanese market, later export. Parts from all those years are fully interchangeable. I can take the entire truck apart with 10, 12, 14, and 17mm wrenches and sockets, apart from some driveshaft and transmission work. The rims are 6 bolt, which I believe makes the wheel mounting particularly robust. The original engines were prone to fail due to the overhead cam running in milled aluminum races rather than proper bearing shells. Any coolant contamination in the oil would damage the head. They can be line bored for bearing shells.

However, the previous series 2 liter Mitsubishi engines fit with custom motor mounts. Those are found in Ford courier trucks from 1972 onwards, plus earlier Mazdas, and very similar to the industrial 2 liter in Mitsubishi forklifts from the 70’s and 80’s. The manual transmissions have interchangeable parts, bell housings and tail pieces interchange, allowing for a very nice swap. Intake and exhaust are on opposite sides in the different series.

The cabs were made with galvanized steel making them quite durable. The boxes tend to rust out. When running well I would get 35 - 38mpg. The rear suspension was weak, adding 2 spring leafs per pack improved handling and load capability.

I would like to find a more up to date engine swap, preferably fuel injected. I suspect the 2 liter Chevy Cavalier engine may be related. 2.3 liter 1996+ Ford Ranger, 1998+ Kia Sportage, Ford Probe all appear to be compatible recommended swaps. There’s ample room in the engine compartment, even a 4.3 or 350 will fit. Which is another thing I really like about those trucks, easy access to all systems and components. Fender mounted 1 gallon washer fluid reservoir, allowing easy changing of summer and winter washer fluid with a siphon. The fuel tank is mounted on brackets and can be dropped without having to remove the truck box.

You answer one of my questions; what vehicle to choose for a wood gas conversion?
A pikup mazda seems a good choice. I also like the rabbit like Jo or the suzuki like Koen. The tracker of Don is interesting also
Thank you for all this information.
Thierry

I think your best bet is the proven dodge conversations. I was talking to a mechanic the other day about this and he commented that dodge runs higher compression in the truck motors then chevy or ford. I thing this is probably part of why people have good luck with them here.

I agree Thierry, Jo has a very good vehicle for gasification, and has built a very good system for it. The nice thing about the smaller vehicles is their economy, probably more a benefit on wood than gasoline, as preparing wood is a significant job, plus there’s the handling and storage. I think the Volkswagen trucks are very rare here, as has been mentioned, they tended to rust away. That was also a big problem with the older Toyota trucks. I have 3 Sidekicks / Trackers, and have been very impressed with Don Mannes’ work, which seems to indicate that the small displacement Japanese engines have the aspiration and compression ratio to perform quite well on wood gas. The Tracker / Sidekicks are getting rare, as they tend to rust out, the body panels and floor pans were 22 ga. Body repairs are possible, but watch out for corroded strut towers, though anything can be repaired with enough work. They are reputed to be about the best 4wd vehicle ever made, much desired by the offroad crowd.

Regarding the Mazda B series trucks, the original engines provide adequate power on gasoline, not excessive power, with the possible exception of the 2.6 liter, which I have no experience with. The possibilities for drivetrain swaps are nearly endless with the rear wheel drive configuration and the engine compartment space. For greatest simplicity an F series engine should bolt up to the original transmission. The best prospect in that family of engines seems to be the FE DOHC, sold in North America in the 1995+ Kia Sportage, apparently built for turbo, but never factory equipped in that format. The nice thing about those engines is that it should be a primitive OBD system, no carburetor to worry about. The post 1992 small Ford trucks were basically rebranded Mazda trucks, although Ford seems to specialize in making things difficult to work on or swap, Imperial and metric fasteners, etc …

They did produce larger displacement engines, v6’s, some of those powertrains may drop in nicely. (Not sure)… Same for the later 90’s Mazda trucks. Any of those swaps will require a complete donor vehicle to transplant the wiring harness.

The other attraction with the Mazda trucks is that they can be gotten for scrap prices.

The FE DOHC motors are valve interference design, not a good choice for learning about wood gas. For charcoal it would be ideal, as they squeezed a lot of horsepower from the design.

If setting up with wood, I think the single overhead cam motors from the Mazda trucks up to the later 90’s would be safer.

The 1986 -1992 series of Mazda trucks were built for the Japanese market, later export

I find this pickup not very far from home, do you think that it is a good candidate for the conversion to the gas of charcoal?
The current owner believes the truck was built in Japan
What should I observe to validate that this pickup belongs to the generation 1986-1992

I find this pickup not very far from home, do you think that it is a good candidate for the conversion to the gas of charcoal?
The current owner believes the truck was built in Japan
What should I observe to validate that this pickup belongs to the 1986-1992 generation that you recomend it

That’s exactly the type of truck I am talking about. From the pictures and description it appears to be in good condition.

You will find it very easy to work on.

Exactly the same as my truck, same colour too. Good functionality with the extended cab.

These mazda pickups are rare here and sells very fast. I did not have time to see the truck it was already sold,

Very unfortunate, that truck appeared to be in quite good condition for it’s age. They are becoming old and rare. With patience you should be able to find one. After the 1986 - 1993 series Japanese built trucks, Ford became involved in Mazda to produce trucks for the north American market. The body styling changed year by year but I understand that the same basic driveline components may have been used until the later 90’s. They introduced larger displacement engines, 3 liter v6, and probably others, which would compensate for the power loss of gasification. According to what I read here on some build threads, the more primitive fuel injection systems may adapt quite well to syngas. Unfortunately I think the later models were mostly all single cab trucks.

What I am not certain of is availability of parts for some of those 90’s models. I like the fact that the previous series was basically unchanged for 8 years, so parts are abundant in wrecking yards and farm yards.

Edit: It might be more direct to place an ad on kijiji or elsewhere looking for a Mazda truck, as they are old enough that many now will be parked and not registered.

The FE DOHC motors are valve interference design, not a good choice for learning about wood gas. For charcoal it would be ideal, as they squeezed a lot of horsepower from the design.

If setting up with wood, I think the single overhead cam motors from the Mazda trucks up to the later 90’s would be safer.

hi Gary
I reread this old quote and I do not understand why the double camshafts poses a problem for wood gas?

In my espri, the DOHC, gives less restriction and therefore a better filling rate!

Hi Thierry,
I think what Garry ment was interference engines are more risky to use when it comes to tar. You’re probably right about the filling rate advantage of multi valve engines.

Exactly, thanks for beating me to the answer Jo.

@k_vanlooken - Any progress on the Mazda?

Sadly, the owner of that car died couple moths ago, the family reclaimed the car.