One tip I have learned from the interweb: Foundry cores are made from sand mixed with sodium silicate, and they are hardened with CO2. Perhaps this would work on the insulation also.

Andy, have you got any idea how hardneing with CO2 looks like? And what kind of sand is used?

Kristijan,
Here is a straight-talking fellow who makes his own sodium-silicate, then makes refractory materials using that plus perlite and other common materials. Seems to work good. This is his YouTube channel:
https://www.youtube.com/channel/UCR4jAT1mvEwRRNo5qv8IewQ
and the sodium silicate: 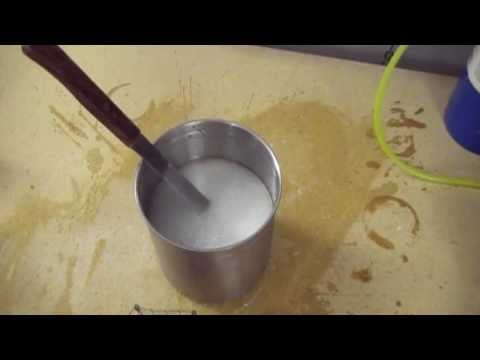 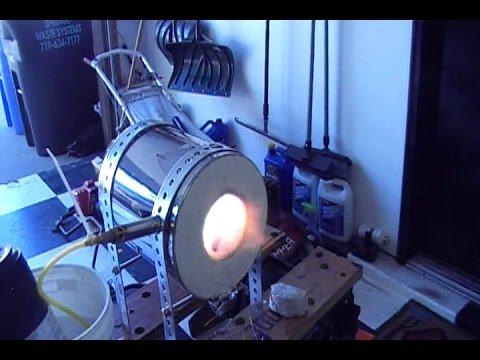 I don’t think it matters what kind of aggregate you use. Here is one video of many that covers the process. Another guy experiments with using baking soda and vinegar to make the co2

Kristijan, I’ve been re-watching your video and realized how much better the pictures were with the full screen. Did you get a different camera? Getting professional results. Might have to start charging admission! TomC

Tom, you are right, l use wifes camera now

I urgently neaded this: 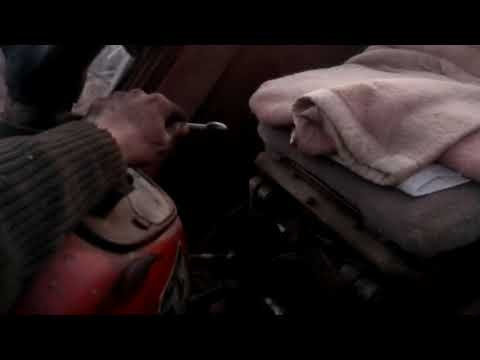 This gets a hour woth of work with my old hand crank grinder done in a minute.

Now that’s not messing around!

With that much power and torque you could process a year’s worth of fuel in a day.

How much charcoal do you produce in a day of with heating house/greenhouse ECT.? I have electrical everything, for my home. I retort or fire pit to make charcoal not very efficient I know for charcoal making.
Bob

Garry, thats the plan! If l can bake enough

Bob, in my greenhouse, l can make at least about 80 pounds a day if l am free from work (2 lightups). However! The sistem now is a “smoldering” type retort, makes good char but leaves a terible chimney. It plugged shut from accumulated tar the other day. About a hour of hard core propane burning was neaded to burn the crap out.
Grinder is done, now its time for a bigger kiln.

My chimney in my outside boiler use to plug completely up with tar/creosote. I dropped my lit cutting torch down the chimney and got a little tar burning. Then I connected a 5 ft long copper pipe to my air line on the compressor. I blew air into the hot tar and things really burned. The water in the boiler would boil and over flow before I got all the tar burned into a crumbly material that came loose when I rattled a piece of log chain in the chimney.TomC

Now that sounds like a real show! I’m guessing your chimney was a piece of heavy wall pipe?

You’re going to be the sites’ leading charcoal producer at this rate. At least a competition between you and Ray. With the fines and dust you are going to be in a great situation to implement biochar.

You guessed correctly Garry. It is actually an old oxygen welding tank that was out dated and they would not fill it for me. I cut the ends off and it became the first part of my chimney. TomC

Kristijan, I know I’ve mentioned before, but I can’t help starting to wonder when you sleep. An endless stream of new equipment are leaving your production line and you still manage to attend to both family and work. Do you work in shifts with a twin brother?
Your new grinder is a real beast. I like it a lot. It will save time and effort for sure.

Kristijan, maybe you should start thinking about lighting a big stack ones a year. In the woods around here there are still traces of stacks from WW2 charcoal production. This video shows a bunch enthusiasts tearing down a stack, grinding and sacking. 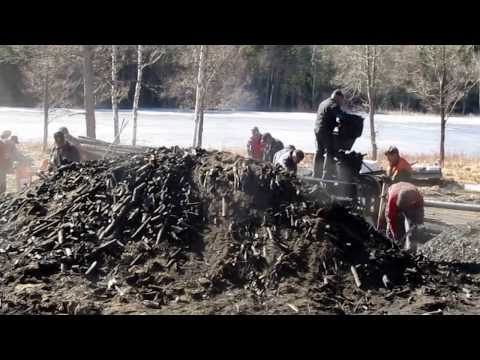 Joke to the side, those guys did a amazeing job. You can hear the char is of wery high quality. But do they have any other videos of how they set a stalk? Such quality “ringing” chat is rare to see from a earth stalk.

Ha, there are patches of black soil in forests where l was born too, from centurys of char making.

But do they have any other videos of how they set a stalk?

As I understand the wood is not allowed to burn once the wood stack is properly lit in the center. Requires constant attention for several days. Any flame that pops up is banged on and/or covered with more dirt and even watered.

This is the stack they started off with. You should get suggestions of better videos of how the stack is built up or search for “kolmila” - if you want Swedish charcoal stacks 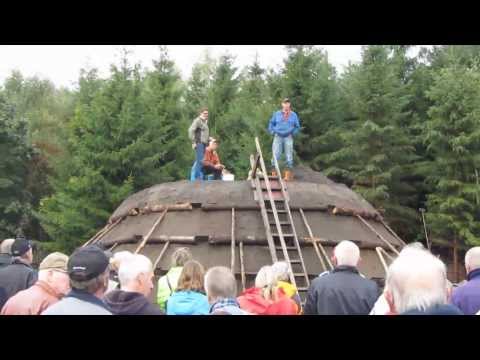 Such sistems are traditional here too. Its interasting however that the char in the video “rings”. This indicates a wery high internal temperature, hard to acheave just with smoldering. Thats why l thod there is something more to it.
Perhaps it has something to do with the mass of it? I mean the pile is HUGE!

One thing they never show is how the char is cooled down in such a stalk. In my experiances, a big enough mass of char with just traces of air will slowly burn like forever.
I know they quenched it in water here, dried on the sun later. But that was blacksmith charcoal, not so picky on moisture…

The couple of thing i did notice were the flames coming from the charcoal on the BBQ’s and the very little dust that was coming from the grinder/shredder means that i wont be able to sneak into the Forrest for free engine fuel as i think it may be a bit too tarry for me , but i bet it makes amazing grilled steaks .

I like this video, it show the whole process of it. 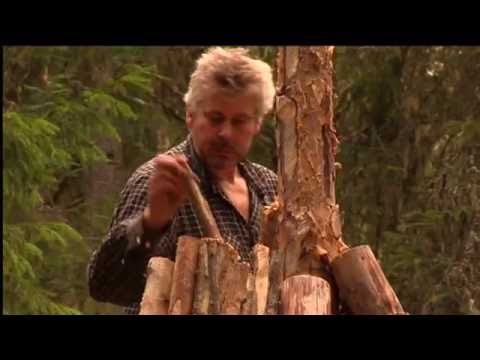