Well l plan to make the firetube as if for a WK. Fins and all. So no problems with tar there, or too much heat escapeing.

Freezeing is the bigest problem realy. Couple of problems with ethanol, first is risk of it boiling in a boiler. Flamable vapour. Then there is allso the price and lastly it wuld change the heat of vapourisation of the fluid, meaning too much of the fluid might boil cooling the hearth too much and producing wet gas. I thod of antifteeze. Eaven old used one culd be used.

Me and JO brainstormed about this a while ago. A “boiler” culd allso be used to “preheat/boil” a mix of air and water droplets. Most likely not as efficiant but in a way simpler and more compact plus less prone to freeze damage. Easyer to prevent the delay in steam production Til described.

I keep thinking of our extreme conditions, but for most people lesser precautions are needed. Perhaps Jo and I are in the coldest environments.

Better to do so thain end up with a failiure.

f you want to prevent microbial growth with methanol at least 50% methanol is necessary.

Are you sure microbial growth is the issue? I have doubts. I think they blend to a rate to prevent freezing at minus 30, or minus 40 depending on grade.

Me and JO brainstormed about this a while ago. A “boiler” culd allso be used to “preheat/boil” a mix of air and water droplets. Most likely not as efficiant but in a way simpler and more compact plus less prone to freeze damage. Easyer to prevent the delay in steam production Til described.

do you know this system? this serves, normally, to feed a pantone geek generator 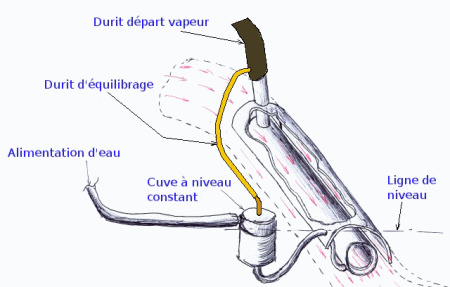 a lot of information on this site,

Générateur de vapeur, conception et réalisation - Do It Yourself (DIY):...

Hi,
roughly speaking the project of Francois is very similar to a Mako S gasifier, except that he has a refractory hearth zone and a heat exchanger with water drip.

the first photo is a 1930s rex gasifier, this type of gasifier is specially designed for carbonite, and the second photo is the project of the recumbent bike gasifier with motorized trailer, its independant design is three times smaller than the original.[rex2][minirex]

I really like his sketch. He uses the hot gas for preheating primary air and creating steam. There is no boiler with a “pond” of water, but a drip. So as Kristijan said more a mixture of air and water drips.
I personally would try to replace the water drip with a kind of carburetor to create a fine water mist. Freezing during the run could be prevented with air already heated before the carburetor. At least in mild winter, probably not in Canada or Scandinavia.

I see the same problems as Krisitjan with ethanol .

Thierry, if l get this right, this is for injecting steam in a engine originaly?

Kind of a litle boiler that fits in the exhaust pipe?

How have l missed that?? This is wery similar to what l am doing. But you think the restrictionless firetube will work in cracking tars from the fuel he uses (cant remember the name…)

Probably yes, it is insulated by thick walled refractory, so the heat is concentrated.
This is the problem with updraft or crossdraft gasifiers, there are cool spots were tars can pass the reaction.
And there is a lot of excess heat in the gasification of charcoal, if you don’t add too much steam to cool the reaction too much.
It looks like the orginal gasifier which he is referring to from the 1930s worked this way.
And carbonite (his fuel) or briquettes or some brands in the char has still much less tar in it than wood.

I belive the problem with up and crossdraft gasifiers is the fuel is superheated above the reduction zone thus giving off volitiles (tar). They get sucked stright in the gas outlet.

Ha, interasting. I wuld guess otherwise since its made from charcoal and actual tar but l guess the actual amount of tar shuld be rather small.

A nother thing l was thinking about is use my 2m3 charcoal kiln to bake wood chunks to a point they begin charing, making intentional brands if you will. Whats your opinion, how wuld this resault in a Mako style gasifier? If they burn well they culd substitute the need for water injection in the winter…

Maybe not quite torrefied wood, but reminded me of the analysis of torrefaction here:

Yes, you are right.

I think the tar content is still lower than for wood. With BBQ-briquettes you need about 2 percent binder (starch). With tar maybe similar? Well, just a guess.

What you are referring to is torrefied wood. In the old book is something written about it, but not very much. It was more focused on the gas quality. Under optimal conditions it was better, but under normal driving with changing loads it was quite similar to char and wood.
What do you think, is it easier to make “controlled brands” than mix some wood and char? I have no practice yet with charcoal production.
Or just add some moist char in the hopper? Maybe this very rough method could also work for shorter winter trips. If its too much you just get low quality gas and water condensation and not tar in the engine.

In the end all depends on the temp in the reaction zone. You want to build a dual fuel gasifier. Something in between the WK, Mako and Francois’ Rex gasifier should be able to handle tar, I think. Maybe you have to add a kind of restriction in the hearth zone.

Thierry, if l get this right, this is for injecting steam in a engine originaly?

Kind of a litle boiler that fits in the exhaust pipe?

you understand, the steam is sucked by the vacuum of the engine

I can not find any reference aboutMako style gasifier
Do you have something about this?

Are you sure microbial growth is the issue? I have doubts.

We must consider microbial growth wherever there is water. Did you ever take apart an airconditioner? Ackkk

That is why we use so many copper pipes, and also some ships had copper bottoms.
I feel that it might be easiest to use a hotrodder’s water injection kit. I am not sure if this is a good one, but it is a good example. 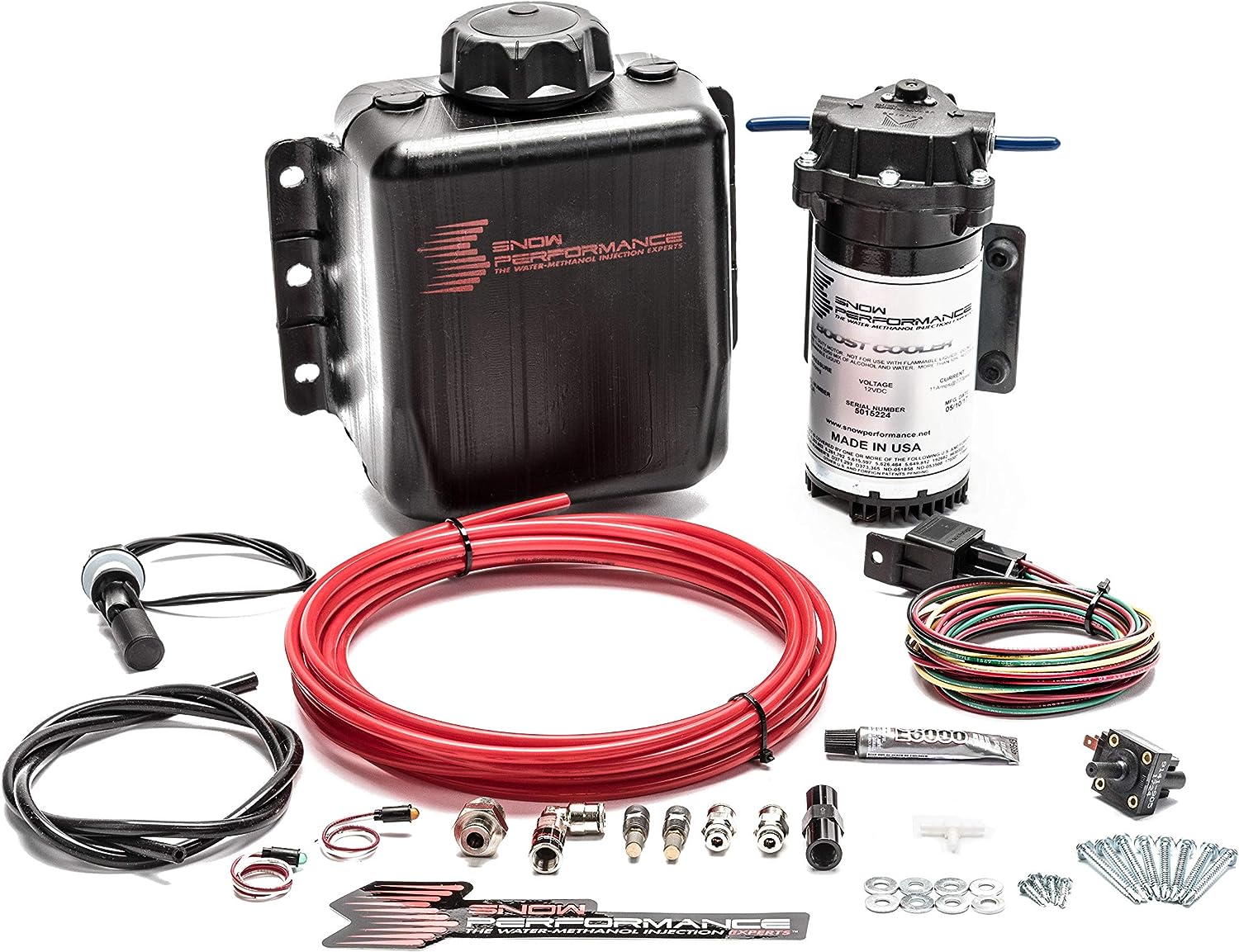 I don’t know if methanol is a worry, seems to be pretty toxic to most things. I’ve never observed a scum or any sign of life in a container anyways. So mark me down as a skeptic. I’m sure Mr Google can tell us what’s what faster than I wrote this last line.

I can not find any reference aboutMako style gasifier

Do you have something about this?

Bruce, that was wery informative! I never realised such a proces exists?

Til, l bet is just for binding a % or two wuld be sufficiant but isnt tar allso added in a larger quantity to boost energy density?

Thirry,
There is a publication on DOW library, gengas, that describes all Swedish gasifiers from ww2.

Rindert, couple of problems l see with this first the price

and second it seems there is no metering on those things? Just on-off… lt wuld be super nice if they made a controled version of this…

I realised l havent yet sumarised what l am batleing with.

The Mercedes first run on wood. I had fantastic performance and speeds of 120kmh were not a problem. Problem was the hopper. If insulated, the story of my Chevy wuld repeat again. Temperature in the hopper became so high lt started to pirolise hopper content, leading to gasifier stall at idle. It has proved to be wery hard to make a condensing hopper in a closed trunk enviroment and both styles have one thing in comon. Smoke. Refill at the side of a road was no fun with smoke comeing out the trunk. Not to mention any micro leak resaulted in a smoky trunk. A real problem as wood requires a larger fill lid compared to char.
So l moved to charcoal. The updraft gasifier worked well althugh it had less power thain wood. Problem was its bulky hopper (neaded to contain the heat) and too frequent cleaning intervals. After just a couple of refills the dust collected in the reaction zone, pushing it up. Soon, instead of a 60km range (clean gasifier) l was down to a good 20. A PITA to clean. Allso on occasion l must of made tar from sneaked in brands.
So now the goals are:

Rindert, couple of problems l see with this first the price

and second it seems there is no metering on those things?

Yes, I agree price is stupid. Thats only for race cars.

But I think if you study you can make your own system for much less money.
There IS metering for most of them. Pat Goodman used pressure from a smog pump in the 1960s. Most use Manifold Air Pressure (MAP). I think Mass Air flow sensor input woud be the best. But you are doing something very different, so you must make your own contol logic. I think perhaps two data inputs: mass flow and reactor temperature.

A water injection system can improve your gas mileage 20 to 50 percent. Originally published as "WATER INJECTION WIZARDRY" in the September/October 1979 issue of MOTHER EARTH NEWS.

This it the layout l have in mind. 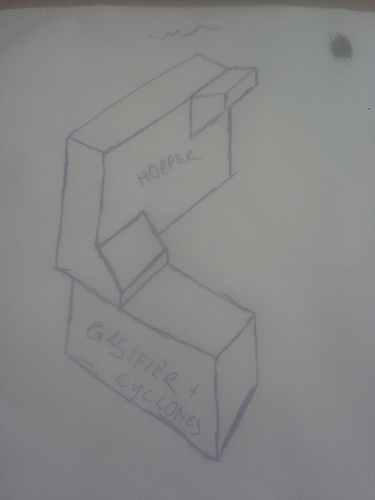 The hopper will lean flat aginst the fuel tank (paralell and behind to the seats).

A auguer will be installed both for feeding the gasifier and for loading the hopper.

Interesting, i was thinking of makeing a shorter hopper for a raw wood gasifier, then getting a plan for a auger feeder system. sprinkel’ing the wood in just enough for makeing pleanty of fuel, lower wind drag and more distance travel if an auger feed reserve pans out with enough space. Happy argos camping, im hopeing too make it there with a tent this year too.LOTS of camping room and decent shower stalls.