This topic is for general information about my 1995 Dodge Dakota Project. Mostly about the truck itself. There will be no WK Gasifier fabrication posted here. That will be in a separate thread. 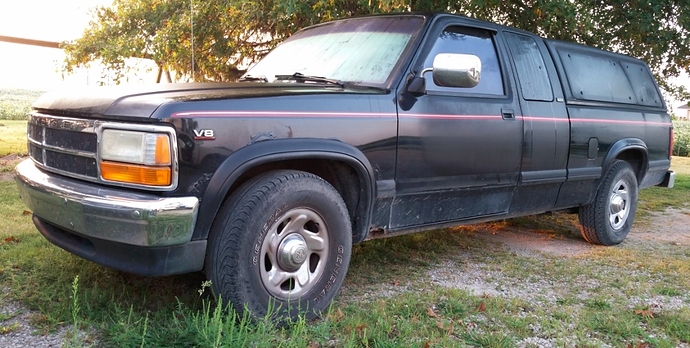 I see you’ve got the swem in the back of the truck. can’t wait til its behind the wheel.

Hi mike r Good luck with your 1995 v8 Dakota project, they seem too be an excellent truck for wood gas, I just idled my WK gasifier around the yard for an hour yesterday, it idles better on wood gas than petro, and no sign of Tared up throttle plates.Just burning plain old scrap pine.

Here is a video with some general stuff and walk-around.

Some fenders a little rocker panel work,she sounds good, paint it and oil the frame and it should out last both of us.

Hello Mike.
It sounds & looks good.Driving on wood is a asume expeirience . 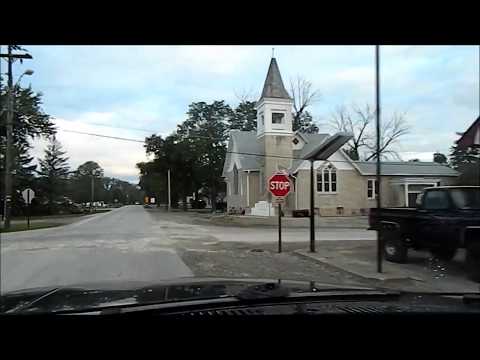 Mike, thank you for the Beautiful drive to work, I made a drive like that for 35 years. I didn’t know about DOW back then. My 92 Dakota runs better with the overdrive locked out for most of my driving needs. When driving on wood the only time I can put the overdrive into service is going down hill or if I have a strong tail wind pushing the truck on the flat road. Running 3500 rpms on wood is just fine in my gasifier, at lower rpms I use less wood per mile, of course.
Get all the little things fixed on your truck and you will be ready to go. Looking foreword on following this thread.
Bob

I have been feeling really odd lately, and this is the result. I wrote this in MS Word before I found the only things you can upload to a post are image files, so here it is in multiple pictures. Hope it is legible! 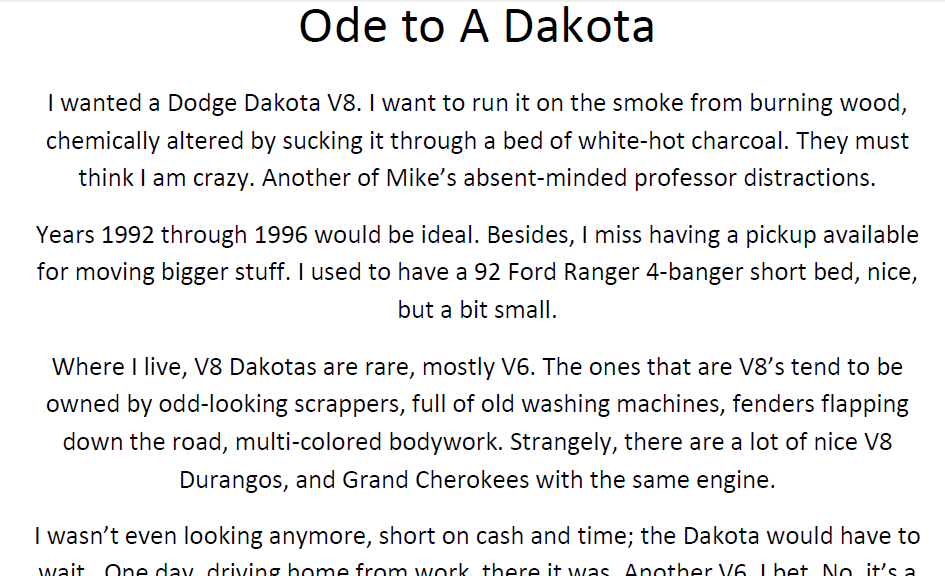 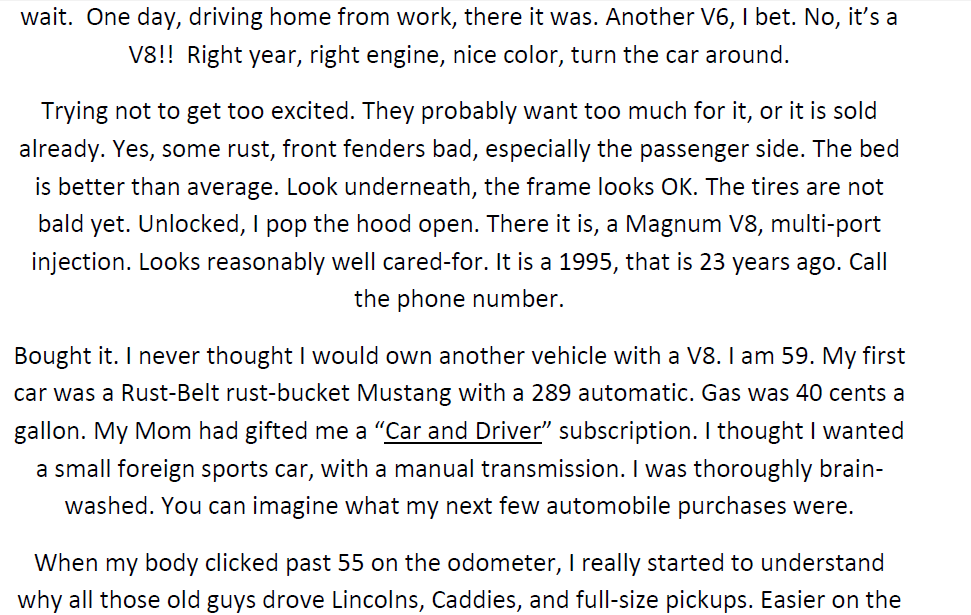 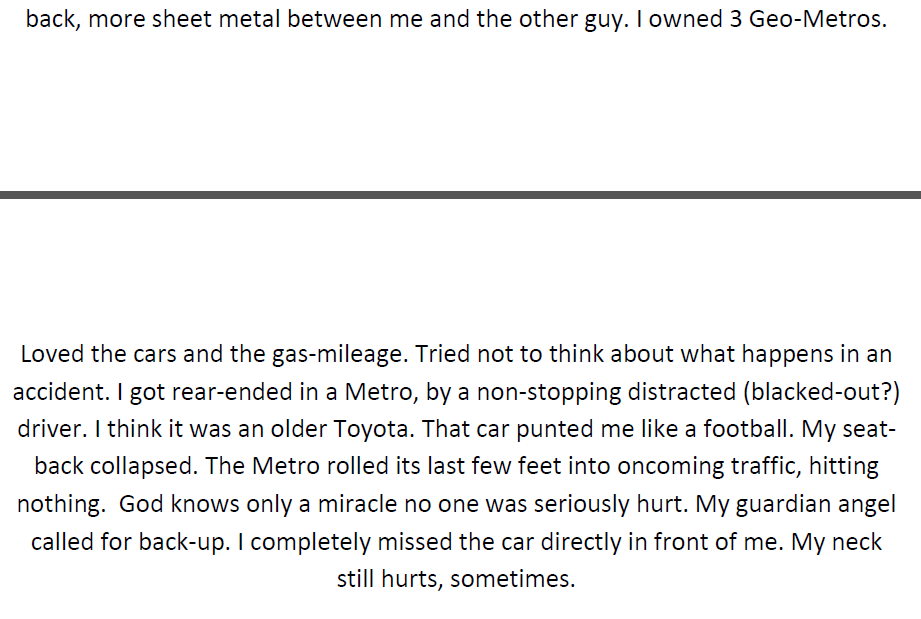 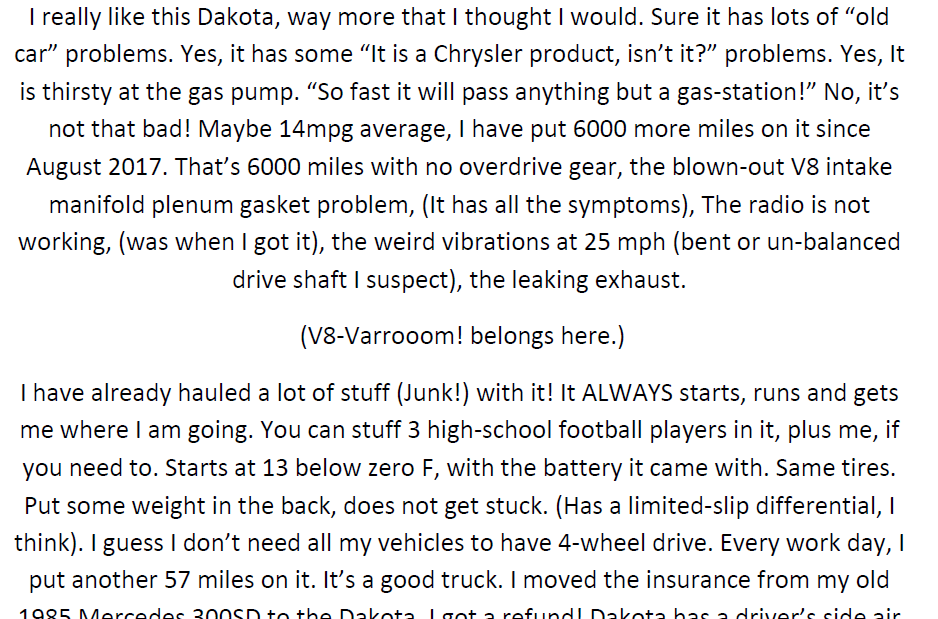 I really wish your overdrive was working . You would enjoy it !!

Thanks, Wayne!
There are a lot of things on the fix-up list. So far, I can only claim sloth and distraction for not fixing some of the problems. I believe the overdrive problem is related to the transmission speed sensor and / or the shift position indicator. I intend to do the repairs myself, but that means I have to actually go do it! The overdrive was a known problem when I bought the truck. They also admitted they had replaced the U-Joints, and one failed, and they dropped the driveshaft while underway. “The overdrive has not worked since that happened”. I like the truck and will fix it eventually! Also, there are a few intake manifold gasket repair kit solutions on the market. I will take it apart hopefully soon and see what is going on in there.

Could be the a simple wire off or solinoid behind the filter if like a gm tranny, good luck and skill finding that fix. I just rebuilt my first gm 700r4 tranny last summer, by watching the you tube guy nick name (automatic) and it seems he guilded my corectly.trannys actually is in my truck and working good up and down shifting good.The basic rebuild kit on that was only 118.$ and my sun shell spline and shell looked ok, the sun shell in another 60$ if need or want too put new on. Those type tranny are fairlly easy if you have an extra core sitting next on bench half apart for clearifying order at times of checking.The tranny guys vidio helped the most.I had the tranny rebuild book probley 20 years just never atempted, the book helped. Some what keeping things in proper order location and rotation of the one way turn gears, one or two could be installed backwards if not double checked.And the core tranny comes in handy for swaping parts when or if needed.As long as one dont force the piston and seals down in the bore after replaceing the seals, that guy uses a small paint brush too tuck the lip seal in and then the pistons fall down in the sleeves lightly. And stp works ok as tranny lube too install the pistons and seals.and lube the gears till fluid gets too them.The trans rebuild kit for that truck fits some of the 3500 rams in 95 so its a heavy duty trans.check rock auto on there trans kits 100 too 300 max with friction clutches and all seals and gaskets.

Kevin,
Thanks for the encouragement! I started watching a good YouTube video of a transmission rebuild. I think it will be awhile before I feel confident enough to tackle that job!

Its a big puzzel at first then as getting firmilyer with the parts and how they fit it gets easyer with just part handeling and cheching the book.You need a large bench too set the parts in order and a core tranney for double checking. So two large benches best till parts memerized locations. And i for got you would need too build a trans stand too hold up too your height with a swivel and on wheels too roll out side for good lighting on the harder too reach assembly snap rings. PS the new 8 speed automatics from asia look interesting. More gears for better milege, and steady throttle angle.The book for me was the most intimiated, once tranny is apart and studdyed it gets down too a very few double checks and the tools cost zero for me, i made clucth puston return spring compressor with a bumper jack and case too hold for the one hard too get snap ring that held the tin spring cage down.by watching the vidio of tools working. Here is the trans stand i made for small block chevy trannys. 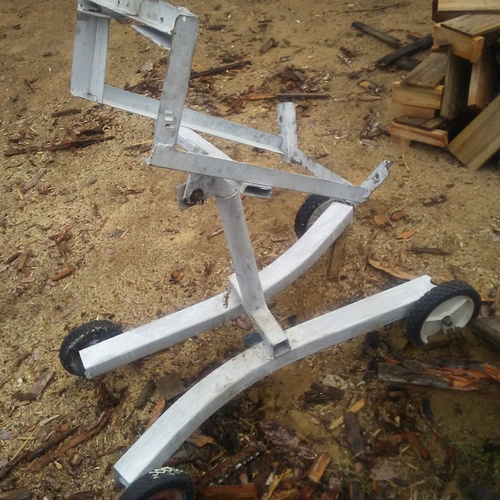 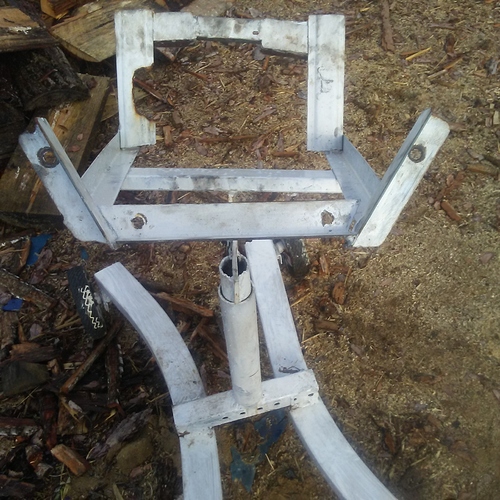 No hurry it took me a week or so too look at all the posible ways too put toogether wrong, and with the parts and book too observe locations. The only thing that i dident check was the end play after pump is snuged down against the parts, if too much play as in a few extra thousands than can buy shim washers too get clearance, long as the other 5 or 6 standard washers are through out the transmission have all ready been installed. Since i bougjt all new standard washers the clearance was fairly snug but not tight so i just let it go at that. The odd way that trannys go together i am serprized they last 200.000 + miles.