Hi Jay,
I noticed part of your screen name is McB74. There is a Seabee Battalion MCB 74, Gulfport, Mississippi. Your name could be Mac “something” or it could be you’re a Seabee. Somehow MCB just jumps out at me now. MCB 7, Davisville, RI, 67-70.
Pepe

Nope, that’s a mac something. I have an old ham radio I’ve kept but haven’t used it in 15+ years.

How many of us are going? I don’t know yet if work will let me free.

Jason, So far, it seems to be me, Alex Taylor, Richard Craig, and Martin Payne. Here is what I sent to Alec Weaver at MEN: I have built a high-powered outdoor stove that excels at producing charcoal for use in a charcoal gasifier that can power internal
combustion engines. The stove is not something I sell, but is a stove
that anyone can construct from junk or recycled steel. It uses a part
of a discarded water heater tank, some used stove pipe, and a recycled
stainless steel pot. I could display the stove, and show samples of
the fuel, as well as samples of the charcoal it produces. Here is a
photo of the stove (the red cylinder) and some of the charcoal:
http://imgur.com/sELiVfS
The charcoal must then be reduced in size for use as engine grade fuel
in a charcoal gasifier. I have constructed a charcoal grinder by
recycling a child’s bicycle and a computer case.
http://imgur.com/EaMCZcE
This finished and properly sized charcoal can then run Martin’s
Motofier:
http://imgur.com/GHZkA5Y
The stainless steel pot on the rear of the Honda holds the ground
charcoal. When the gasifier is up to temperature, it produces a
composite gas containing carbon monoxide, Hydrogen, and some Methane,
and of course Nitrogen. This is filtered to remove any tar or soot,
and is then mixed with fresh air to create a combustible mixture, and
fed to the Honda. The output power is about 50% of what it would be
on gasoline.
The two of us could set up a display that shows the charcoal maker
(stove), the grinder, and the Motorcycle. We could have samples of
the raw fuel, the starter kindling, and the output charcoal, as well
as the ground engine grade charcoal. Throw in a few black/white
posters and a flow diagram. Martin has a short YouTube video of the
motorcycle running up and down the street near his house. I have made
a slide show (on YouTube) for anyone that would like to build a stove like mine.

The response to us was: We have a reserved
space for you inside, but it will not be sectioned off by any poles or
curtains. Your spaces are in Garth Arena at the Cell County Expo. We
also have Alex Taylor who will be there doing a workshop presentation,
and he will be joining you two at the space with his woodgas mower. Ideally,
we would like all of you to be there the full weekend, Sat 9-7, Sun 9-5
that way you can answer questions from attendees.

At this time, I’m not sure if we bring our stuff up there on Friday and set it up, or how we get the week-end wrist bands, etc. (I need to see if my grinder will fit into the car - may need to modify it somewhat…)

“I have constructed a charcoal grinder by
recycling a child’s bicycle and a computer case.
http://imgur.com/EaMCZcE”

Do you have other info on how you built that? I don’t remember seeing it in your threads.

Do you have other info on how you built that?

I basically copied Gary Gilmore’s grinder as shown in this short video: 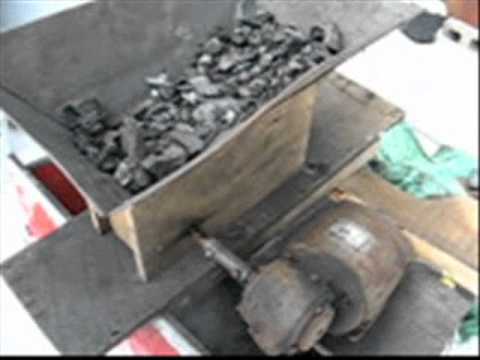 The heart of this is the 3" steel tube with pieces of railroad spikes welded on in a staggered fashion. I welded the tube to the steel sprocket on the bike, so I can crank it by hand (wearing a respirator for lung protection). Leaving the handlebars on the bike and using the computer case makes it unique. Whereas Gary uses a slanted screen of hardware cloth to remove fines, I use a frame laying flat on a wheelbarrow, and then use a brush to scrub the fines through the hardware cloth. At that time, I can remove nails and any little pieces of brown wood that didn’t get completely converted to charcoal.

Bump. Anyone else who wants to go, it’s getting down to the wire.

I sent you an email, looking for more info on the logistics.

Well, I guess I’m in. We’ll see some of you there. No February snows this year, the year without winter. Forecast for Belton, TX 75F

Hello Carl,
We will be at booth #4417, which is inside. My wife wanted to attend the Fair, so she volunteered and was accepted for a 4 hour shift, and that is supposed to get her a wrist band for both days. I am looking forward to seeing/meeting the other folks from DOW. Martin’s charcoal gas powered Honda should be a hit. (It is very shiny/pretty…he did good work.)

Hi Ray, I’m looking forward to a great weekend. Will people be setting up Friday night? I din’t know anything about a wrist band. It will be good to see Martin again and the bike, as well as Richard from Marshall, AR. I downloaded the list of exhibitors today. It is very impressive, and long.

Carl, I just looked in the file they sent me, and the talk is about badges. The wristband information might be for attendees? https://www.motherearthnews.com/store/product-category/mother-earth-news-fair/belton-texas-fair
We can set up in Friday 8 a.m. to 6 p.m.
http://www.motherearthnewsfair.com/wp-content/uploads/Texas-Exhibitor-Kit-2016.pdf
We are considered an Off-Stage Demonstration in the DIY area. (Do-it-Yourself) I believe Richard Craig, Alex Taylor, and Jason McBride are also going to attend, but I don’t know any details about their participation. I believe Alex is giving an on stage talk, and is bringing his lawnmower. It might be in our booth. For sure, I am bringing a charcoal making stove, and a charcoal grinder, and Martin will have the Honda. I will bring samples of raw fuel, raw charcoal, ground charcoal, and fines in sealed plastic jars, for display. (Trying to avoid making a mess…easy to do with charcoal.)

I was just going to see if I can get away and attend the show personally. I don’t think I’ll have one of Matt’s gasifiers in time to bring and show to you guys. I really would like to see the portable saw mills demoed and go to a soap making class. My girls are not going to go cause the eldest wants to drive into town do a women’s night out the same weekend. Kind of bummed as she was the one to visit to justify the drive out there.

Glad to see several of y’all going that way you can spell each other and take in parts of the fair. I got hammered at Topeka. There was a lot of things I wanted to check out but couldn’t get away to do so

Somebody please take lots of pictures and videos!

Chris
Do you want to ship a few books to Carl to take with him?
Just a thought

I was going to hand out the WK flyer Chris published a while back. Books might be a hit.

Had a few people ask if I had them I just directed them to the website. Maybe you have yo strike while the iron is hot.
Chris did you notice any uptick after Topeka?
Just wondering

Carl, I’d be happy to send you some books if you want to try and sell them. Send me an email and we’ll work out the details.

Tom, honestly I don’t remember an uptick but I wasn’t really watching closely.

Sorry, but I just learned no sales without a Texas sales tax permit. 2 week lead time.