Hey guys, I was just trying to figure out if I could build a gasifier that could run 2 or 3 different 10k watt generators at the same time?and could i just connect 3 different engines to the gasifier right after the filters using a single air valve for all generators? not sure if the pull from the engines would effect eachother or mess with the air to gas ratios that the generators need

Welcome to the DOW, Nick.

Why would you want to do this?
Regards
Steve unruh

The glaring problem with your plan is that wood/char gas has less energy value then gas. It ends up to derating the output. so your 10kw generator might on a good day produce 4kw.

That being said, you might be able to do a hybrid scheme so if the load is 3k it runs on woodgas, then as the load goes up start injecting dinojuice in. But I don’t think anyone on this board has done that for generators.

What would be your fuel source? like what kind of wood do you have to work with or are you thinking charcoal? Do you have fab skills? I am just trying to cut through some of the variables before others chime in.

I think the approach might have some advantages by cancelling pulsating gasifier draw, but it seems pretty complex.

I’m wondering what you are needing 30KW at one time for. As Sean noted, you might get half output on any given gen set. I know that Matt R has ganged several of his units together to increase the quantity of gas to an engine. I’m wondering if anyone else has tried feeding several small simple fires into a common plenum to run one larger engine.

Thanks for the answers.didnt even know pulsating gasifier draw was a thing lol.im aware that the gen only gets about 40% usable power out of the woodgas,I only need about 12k watts max out of all 3 10kwatt generators.im using dried sawed chunks from the trees on my property

O.K. Nick here is a woodgasifier fuel gas suppling a loaded down internal combustion engine:
a person hard sucking with a straw on a thick milkshake.
We suck the wood gas system as it is the safest for any toxic leaking out carbon monoxide.
Sucking the system with the engine then engine loaded demanding needs will proportionally hotter fire up the gasifier for more gas supply.

Now what you are asking IS NOT three people sucking out of that thick milkshake through three separate straws. NO.
It would be one big straw down into the thick milk shake; then split three ways up to three different sucking people. Greedy kids at that.
Should be obvious their will be some equitable sharing problems.

Anyhow, I did DOW past search because this has been kick around a few times in the past 8 years.
The opinions fall into nope/never/work, why would you ever want to . . .
To . . . sure it could be made to work . . . by switching the gasifier system to air-in pressurized feed with variable control. Or having a big variable controlled constantly running gasifier blower system electronically feed back variable powered driven. Complex to build; set up; and maintain.

Two fellows systems have been highlighted on the DOW building for that kind of hourly daily needs power.
They were both electrically driven log to boards sawmills. Their mills logs edge wastes being the wood fuel inputs.
You will be needing at least 100 pounds an hour of properly chunked up and dried wood fuel an hour to feed this system.

One of these fellows loaned out his system to a relative family without power for an extended time. Had to be a whole family operation to do the wood cutting prepping to “feed-the-beast”. Did not take them long to hustle butt and get back onto Grid power.

So color me skeptical that this is more than just a head game. I fuel fed a big old 20-30KW Onan industrial trailer three phase generator set just for gasifier design developing. Not, ever something I’d want to do daily.
Steve unruh

Damn not what I wanted to hear but maybe what I needed to hear lol.im offgrid with no power lines around or I would’ve already taken that route.just trying to figure the easiest way to make this work I dont mind chunking all day lol

Nick,
Welcome to DOW. You have gotten good advice from some of what I consider, our experts. I am certainly not the expert here–I run a 5,000 watt generator with a SimpleFire charcoal gasifier in emergencies if the gasoline supply runs out. BUT you could certainly run three generators with three gasifiers as needed. Also, a combination of adding solar, reducing power requirements (leds, etc.), and reducing general power needs (simpler lifestyle) might help make your overall goal more easily achievable.

IF you have hardwoods to make the good charcoal.
IF you can seasonally make the wood charcoal . . . . charcoal gasifers have the lightest weight, simplest and quickest up to operations versus a raw chunkwood gasfier.
And making the charcoal in big batch’s then the wood prepping can be minimized.
Regards
Steve unruh

Thank you for the information and your time.much appreciated.my plan b was to build 3 different gasifiers,just gonna take alot more work.as for charcoal from what I understand is that it produces alot less usable energy out of the wood but since the combustion tube is going to have to be much smaller for 3 different gasifiers Iinstead of 1 big one might have to look into it seeing as how I’m sure the wood chunks will be to big and clog up

Welcome Nick, I have no special experience to answer your question, but I am of a similar opinion as Steve, a suitable gasifier for a particular engine is the optimal solution, here I am attaching a link from our country where you can see that each generator has its own gasifier.
http://www.biomasa.si/referencni-primeri-vgradnje

Yeah, it is true.
Small wood gasifier want small wood chunks or large screened wood chips.
The real engine danger times in a wood gasifer systems are from a cold coming up to good non-tars gas producing heat.
System shut down. Internal heats bleeding down; then remaining interval woods tars making.
I said charcoal as it avoid both of those problem areas.

Me? I have no choice but to use wood gasfers.
It IS, and CAN be done. Takes good operations managements.

My two hard to do areas has been deep well (192 feet) pumping power.
Welder power.
These just really need 240 AC heavy watts.
Of course other ways to get around this for $$$$ alternative systems.
I’ve generating equipment set up for two separated 10, and 11.5 kW system for these.
Gasified operated others set up systems for this size.
Ha! Would double my annual 30,000 pounds current stove’s fuel wood making to electrify at that level.

So . . .I changed focus to using less annual wood stove wood. Less overall electrical needs.
Going to much smaller 120VAC multi-process welding now.
Sigh. It’s a challenge any which way a fellow would go, eh.
I have time. I only go off-grid when they fail me.
Look forward for the day I could cut that cord.
S.U.

Thank you for the information and your time.much appreciated.my plan b was to build 3 different gasifiers,just gonna take alot more work.

Maybe. I think 3 gasifiers could work off the same gasifier. It is kind of like a car engine idling and then going at various speeds. the draw is different in those use cases. The airflow at max speed likely won’t be all simultaneous. Like if all 3 are in sync, then on the intake stroke you would have the instantaneous draw of all three at once. the likelyhood of that happening is fairly slim given there are 4 strokes which makes it easier to get a more continuous draw, and you will have a much better shot then trying to get a single cylinder trying to get to run woodgas because the flow should be more even.

If you don’t have a chunker, or eq, then possibly small charcoal ones would be the way to go. You don’t seem afraid and seem to have done some research. You have an idea of what you are getting in too. I would say go for it. There is a good chance it will work just fine.

Maybe. I think 3 gasifiers could work off the same gasifier. It is kind of like a car engine idling and then going at various speeds. the draw is different in those use cases. The airflow at max speed likely won’t be all simultaneous. Like if all 3 are in sync, then on the intake stroke you would have the instantaneous draw of all three at once. the likelyhood of that happening is fairly slim given there are 4 strokes which makes it easier to get a more continuous draw, and you will have a much better shot then trying to get a single cylinder trying to get to run woodgas because the flow should be more even.

That was my original thinking.and if that failed i was going to try to add 2 more cooling and filtration systems and then connect the generators to those.so it would be 1 gasifier combustion chamber with 3 exhaust pipes leading out with there own cooling/filtering system at the same lengths .Steve wouldnt that solve the 3 kids drinking a milkshake out of a single straw? It would be like adding 2 more straws…by the way once up to power all generators will be running equally at the same rate of power without idling

Yes it can be done. I did this at Argos a few years ago. Practical absolutely not it is hard enough to get one engine started on wood gas let alone two or three.

Here is a better solution. A charcoal gasifier can be built very easily and cheap. Now if you have three gasifier you can network them into a one generator. So now you have three units and you can run all three generators or if you only need the one generator you can then team your three gassers together to extend your run time.

What are powering with the three units? You are planning to run separate applications right?

But wouldn’t 3 gasifiers make it be more maintenance and require me to be close to it all the time shaking grates and fixing possible bridging and what not I just figured that would be harder to do than to get 3 engines stay running on one. I have an indoor climate controlled greenhouse that I run(not what your probly thinking) lol I grow all types of exotic fruits and vegetables that most people never even heard of that cant be grown in the us. Its actually pretty cool lol

Not if you go charcoal. 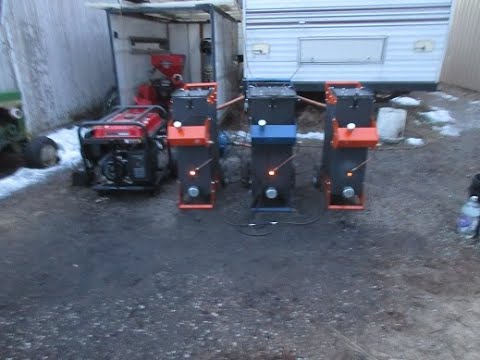 If you go raw gasification regardless you will need to automation the entire system or you will never walk away from it.