That is a great design, that is handy on being able to push the wood or Charcoal out to regulate the stoves temperature. Very simple.
Bob

Thanks, I was thinking I could use this instead of of a burn pit to make char, I could put a pan at the end and catch the char coming out then seal it for making of charcoal. I have only burnt it once or twice, so many thing I could change with it Tons of fun

My first thought is, scale it up. At a larger size, or smaller diameter material, (multiple stems), the process will be more consistent. Plus larger throughput.

As of now I can’t keep up with the demand of the unit, it burns bamboo very very fast. I am starting to go thru and coppice trees for material, letting it dry. My Bolivian sunflower burns very hot in the unit but the fuel does not last very long much like card board.

The next step I guess is to put this to work heating thermal mass, I have built this out of air crete, and I am thinking of building a storage tank of water for the heat or using concrete, then piping that to my home, but I have too many ideas swirling around in my brain to choose one as of yet.

For some reason I really really like this stove here. Its obviously a very good stove with over 2 million views!! 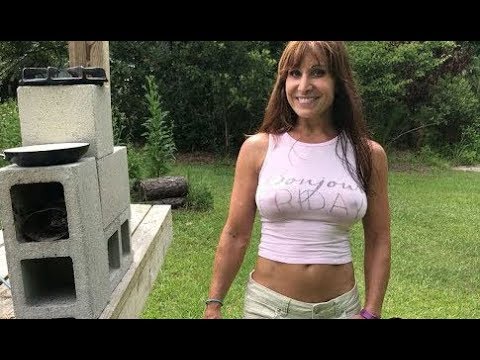 I agree, looks like a first rate stove. I should watch the video…

Puts out a ton of radiant heat.

Looks good.
Are you using to make char or to efficiently burn fuel to make heat energy?

If you are making char, how do you know when to move the fuel material through? Is it for bio-char or for fuel char? Do you crack your bamboo first?

If you are making heat:
Couple of thoughts I had about it…If you’re interested…Do you have a grate to allow air in under the combustion chamber. A good rocket stove shouldn’t really make much charcoal. If it has enough air coming in to mix with the gas it should burn up most of the char. Also, if both inlets are the same as the chimney it will tend to slow down air velocity and allow more char to form. Making the area of the inlets roughly equal to the chimney will make it burn up more of the fuel. Maybe you’re trying to make charcoal though. I sometimes intentionally break a couple of the rocket stove principles in some of my stoves so they will make more char…Don’t tell Winiarsky.

Matt, I think even Dr Larry would like that rocket stove. even though he’s always getting onto me about using too dense of bricks.

This is a prototype, meaning, I make it cry about my mistakes and failures and you get to laugh

I normally take the ideas I see working like TLUD, rocket stoves, and gasifiers and then attempt to fix it for my needs. I grow a large amount of bamboo at my location and having a way to turn that into heat and or char is all good to me.

What I have been experimenting with is using a 5 gal pail on top of the flames and feeding the exhausts of that back into the flames below to make a high grade char. This works for me.

I would like to use this to heat a thermal mass, I am torn between heating water or heating a large mass of insulated concrete, Then using like a heat exchange to bring that heat inside to heat a small room. I am still in the early stages, I may build myself a test setup outside.

I have a friend who has built a cob oven that after it is fired it stays hot for like 3 days, I was thinking if I had that mass right outside my window, I could pipe that heat into my room via thermostat control.

I don’t know much about thermal mass, but I adore what I have seen with cob ovens, and I want to combine the idea of a cob oven with a rocket stove, then super insulate it so I can pull the heat off when I want it.

No body here laughing. I appreciate the photos. I have been looking at making some sort of heat retention outdoor furnace myself. Is your rocket mass heater not doing the trick?

I have just been experimenting with aircrete combined with ceramic fiber in making a rocket stove. I have not as yet built a rocket mass heater, I have been building up in stages as I am getting better at making molds for air crete, I started with a 3 inch then a 5 inch, now this is a 7 inch tube. I also want to test some refractory mixes so my mind is in a blur as I watch hundreds of youtube videos and all kinds of these ideas bombard me at once.

I have finished reading a Book on Rocket stoves, and I think the next book I read will be on Cob ovens. I have skimmed that book as it looks 1-2-3 easy to build .

I have been watching closely a youtuber by the name of Honey Do carpenter and I am very impressed with their logic of design of building.

I guess I just love playing with fire to be honest

I guess I just love playing with fire to be honest

That is one cool stove!

Thanks Leon. I have been using my other oven so much I have not had time yet to play with that. Perhaps when it gets cooler this fall, here in Florida.