This is where I’ll talk about my timber stand improvement machines. Been working on this small scale subject for a few years now. I’ll keep posting as I get the time. Below is a photo of the first generation ready for Argos 2015. Here’s a video from last year: 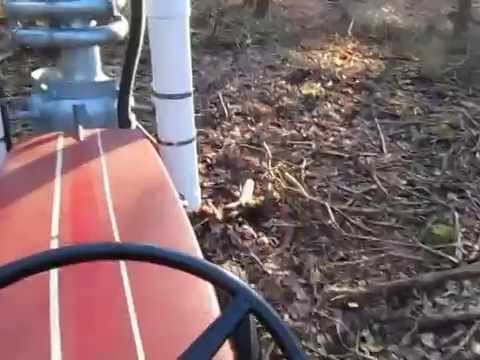 Very nice useful machine. Bet Bill S. is drooling watching the video. He could use this baby at his new property. Looking forward to seeing it in person in a few weeks.

This is a photo of the second generation design that’s in the works. Had to put it aside in order to get ready for Argos. Plan on bringing it also. A miniature skid-steer, I like it. Figure out how to make it 4WD now. Hydraulic??

4WD does have a lot of of advantages but I’m trying to do the most with the least. More gears or hydraulics chew up more power and expense. And a small clone engine only has so much power on charcoal. Also this design should not nose over because the pull point is between the front and rear axle. That also puts weight on the front drive axle. A 4WD can be made from two tranaxles but then we would have the possibility to nose over. Only time will tell if this will work out.

Am I looking at this correctly Jeff that you are steering this with foot pedals pulling on the rear frame?

Hmmm, foot pedal that’s an idea. I’m shooting on a cable scheme maybe levers or a cable drum shafted to a steering wheel. I’ll try the levers first. But yah the cable will be connected to the rear frame and pull the front frame over to one side. One on each side. If yah get the points right it seems to steer easy but out in the real world things change. I was just starting to work on the steering when I had to put the project on hold. It might be the last major hurdle…

Some times there’s work out side of the forest that needs done. Only the tractor is on PG. Now only if I had the time to convert the brush hog. I think the clone would power a short sickle mower.

Installed an hour/rpm meter. Racked up an hour and a half. I would have guessed only a half hour. Replaced the cyclone with the sock filter and I seem to have restored my power. 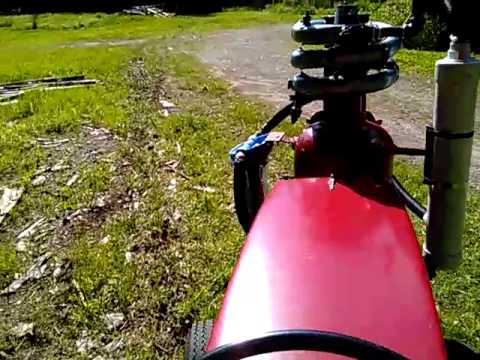 Nice build,Working good,useing some of that waist scrap wood.Was that a trailer mounted brush hog or did you make it that way.Thanks

Was that a trailer mounted brush hog or did you make it that way.Thanks

That’s one of my few store bought things that I have and it’s not been modified. It is at the rock bottom of the price range but seems well built. The main down side is that the draw bar is not fancy adjustable like the expensive ones. It’s a big help for planting trees. Sure was hot to day…

Thanks for the reply,

Nice tools them there gasifiers,be getting my first one working on motor soon as time permits before winter,long cold winters here in michigan.I would like too see bill use his WK wood gasifier he made for his lawn tracktor, maybe you will have inspired him too make a log dragger out of his.Nice narrow trail finder those smaller tracktors,more tools the better.

Twitching out some firewood for Dad this weekend: 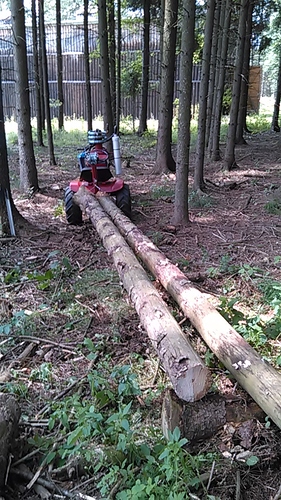 That tractor must have one beefy rear end on it to handle that weight.

That tractor must have one beefy rear end on it to handle that weight.

It’s up there with the Cub Cadet rear end. Pros and cons between the two. Cast iron, this one has the 1 1/8" axles. Three speed with a high low gear. Those are two dry dead pine logs so really not that heavy. Does useable work and a pleasure to own especially the older I get…

Felt good to get out side for a change. Dragged out some blow overs from the last wind storm. I can hear the next one moving in… 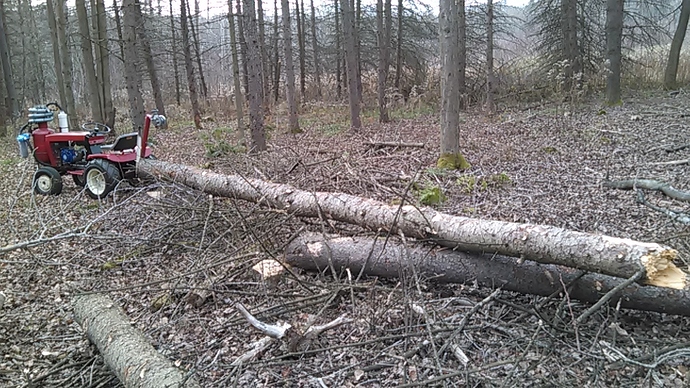 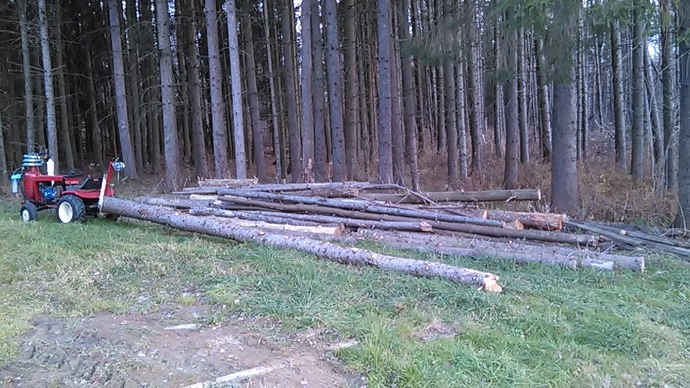 This is when the lights were going out. 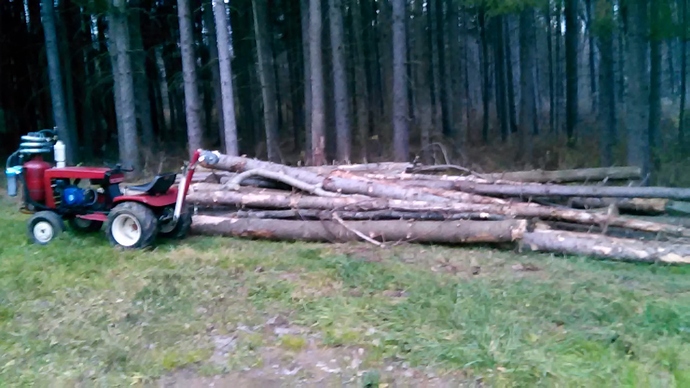 Haven’t fired up in a few months and it didn’t want to start on the first pull. Had to richen the carb up a bit, wonder if it was the cold weather or maybe I should have fanned it more… Oh well…

Jeff; Is that a pine “plantation” ( an area planted with pines ) How do you not have a bunch of young saplings growing between the trees? We have plantains that were planted 50-60 years ago. Every 10 years or so they go in and cut out every other tree to allow the remaing ones to grow taller. In the meant time cones fall to the ground and it is full of your saplings.TomC

It looks like it was planted with a cabbage planter and then left to die off because nobody bothered to care for it. I would say that about 90% will die off or more. Almost no seedlings because of lack of light. Also poor site for pine. Trying to plant trees but not much of a green thumb do I have. Haven’t had much luck with black locus. Norway spruce has a good survival rate but only grows about an inch a year. Aspen is growing nice on it’s own. Some hope for black willow. I need bamboo right now…!

I always liked this video: 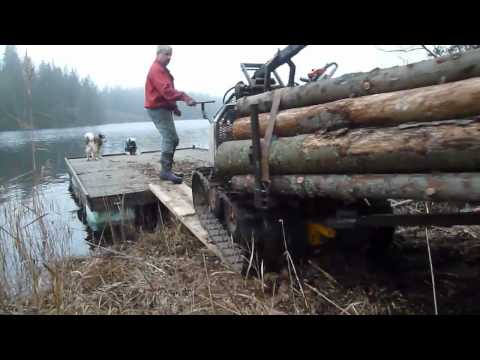