Hi Dean,
it’s been a lot of fun for a fellow Canadian watching your build and seeing your progress and your fabricating skills. I started a Ben P gasifier almost 5 years ago at work to keep busy in the slow time bt as things got busier I had to put it away until a couple months ago. My daughter’s boyfriend is a fabricator so we hired him to finish up and fix my crappy welds.
We have a saw shop and tool rental business and a lot of customers have seen the progress and one older guy caught the woodgas bug and bought two of Ben’s books and has already cut steel. I have pointed many folks to DOW and lately to your build in particular.
Keep up the good work and know that you are encouraging more people to persue this “grate” and worthwhile adventure.
BBB - Oldplaner

Long time no see , Real good to hear from ya

Hi Wayne, good to talk to you again too. I’ve been getting the woodgas bug again, it’s been almost 5 years since the truck has been driven on the highway and I’m missing the smell of woodgas although I have driven the little 12HP charcoal tractor.
I was watching your vids from Argo a couple weeks ago. Lots of fun.

Paul I think your YouTube videos were among the first I’d ever seen of real deal woodgas vehicles when I was in high school that wasn’t some reality TV hokum. I saw Wayne’s videos a little later.

Hi Cody,
it’s funny how things come around. Back in 2003 I was still logging and was at our Dry sort talking with a mechanic from another logging outfit who told me about some old timers that were in the Canadian army during WWII in Germany and they were on leave and came across a shed with a car in it that had a woodstove in the back, they lit it and drove around on the smoke.
That set off a two year journey just trying to find information on it using search words like “car woodstove” Finally saw an article on Mother Earth News and bought a set of plans and began reading everything I could on the subject and gathered up tanks and such. I still didn’t know if it was real or a hoax to drive on wood.
When I was close to building somebody on The Forestry Forum started a thread about a man named Wayne Keith in Alabama! Later in the thread I started posting pics on the build. Around that time I met Mike Larosa online and in Sweden Johan Linell and two friends were putting together a WWII Imbert to run their Volvo across Sweden and I followed that religiously. Then Ron L built his cool truck and tractor and then Stig Werner came from Sweden to Canada and built a system for somebody in BC. When he was finished he came and stayed 3 days with us and had some good talks.
Through the whole build, Mike Larosa was a cheerleader and encourager to everybody new to woodgas.
When Wayne and Chris started the DOW it changed everything, now there was a proper forum to share info and photos with others around the world and boy have the systems evolved and become more sophisticated and now we’re learning from folks in every corner and gatherings like Argos are fun to see even from way over here.
My wife’s Dad was born and raised in Germany along the Baltic and as a high school student spent time in Berlin with an anti aircraft squad and later inducted into the Army Dec 19 1944. I had the privilege to take him for a good long ride in the truck and he told me of his times riding on transport trucks that were woodfired.
A longwinded post but driving on wood is even more fun when you can share it and hope it inspires others to do the same.

Excellent time-line post PaulH.
Some of those woodgas advocates are gone now.
Some have never been on the DOW.

Others have stepped up now, too.
What makes DeanL’s works so good is that he remains true to actually make-power-with-raw-wood.

Most electrical generator guys here on the DOW now just charcoal gasify.
Afraid of wood. Afraid of tars. Afraid to one hour zip-apart an air-cooled single to decarbonize, rings free, valves free up, lap and adjust.
Even when given detailed books plan sets; and operational guidelines how to not send tars to their engines.
And that sure was not available back then, eh.
Just ideas; and experimenter’s unproven notions.

Yep. Yep. Step back into making your shaft power with wood. The trees are still out there a’growing. Not exactly free. Takes work-sweating.
Regards
Steve unruh

Hi Steve,
it’s good to hear from you although I’ve been reading your posts here for awhile. I lost all our email conversations from a few years back when my email server crashed. It was your endorsement of BP’s book when you called it “Ben’s gift” that prodded me to buy the book and start rounding up material for a build. We just completed the gasifier and flared a couple times this week and have begun prepping the engine, a V twin Honda. It’s good to smell the woodgas again. 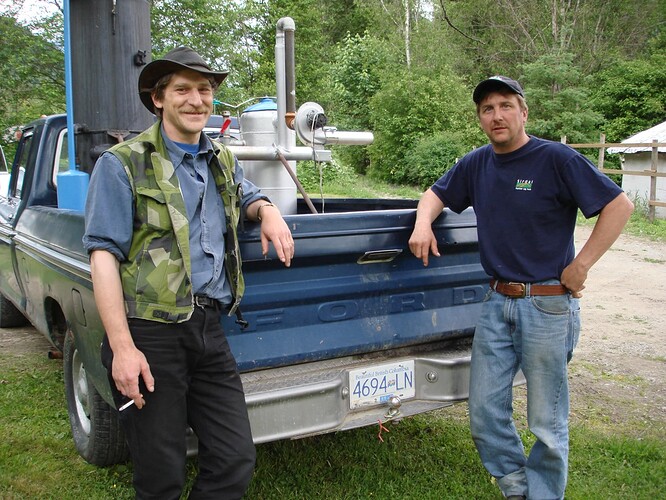 DeanL
Have you been running your system much lately and have you had any problems during that cold snap? My hay filter would freeze on the truck in sub zero and wouldn’t let the gas past it.

Hey Paul, no I haven’t been running it lately, I hopefully will direct wire it in when it warms up in the spring or summer but the 3 times I ran it this winter with 6000 watt load it worked great it was minus 20 c and I left it outside,I added more cooling pipes and a cyclone so maybe it removed more moisture before it got to the filter, it runs about an hour on a hopper with no adjustments or problems , once you get it set just go for coffee, so I’ll prob make a bigger hopper some day. A few days ago I started to build a bigger gasifier sort of based on Ben’s big bore dimensions Wayne’s dimensions and Tone’s design with lower nozzles and a nozzle in reduction zone, and Wayne’s hopper tubes.
Ps what prov you in? 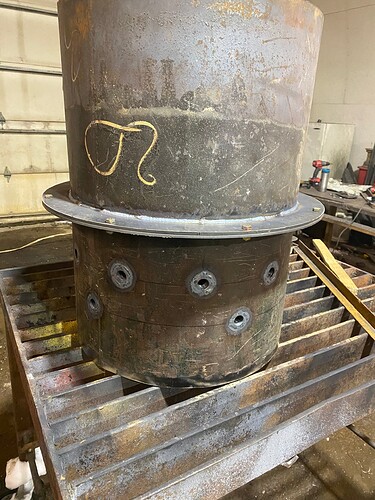 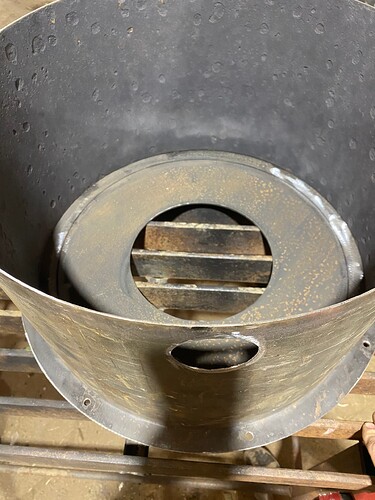 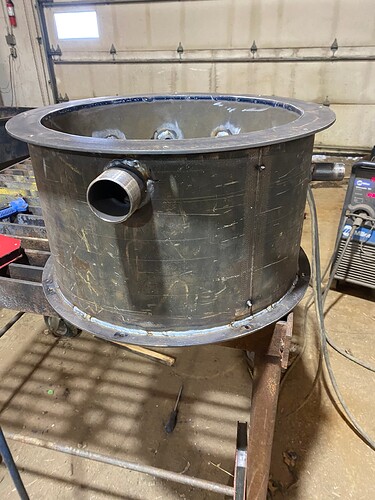 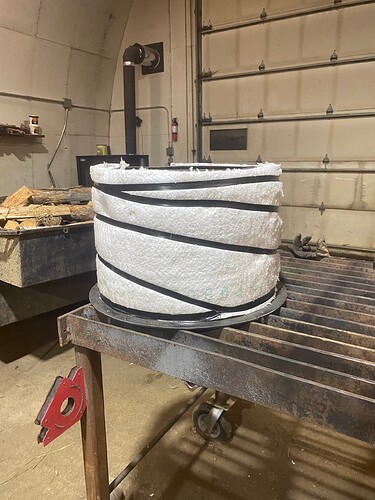 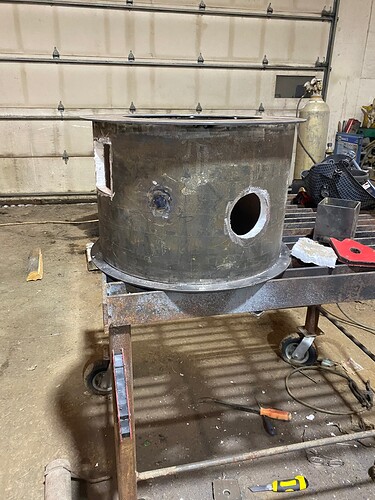 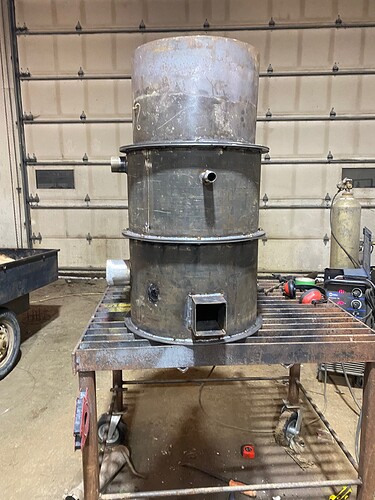 Hi Dean,
I’m in BC in the Okanagan between Salmon Arm and Vernon, we moved up from Pemberton near Whistler in 2010. If you ever get out this way give a shout.
I’m looking forward to your progress on the new build!

I was just wondering because I have Halvorson relatives in sask, I used to go to bc every year looking at gold claims a couple years ago, may be come up this spring.

Good to hear from you Steve,I was missing you , raw wood is the way to go with these twins it’s charcoal below the wood anyways.

Tone I’m gonna make a grate with 1/4 inch holes and 3/8 holes and no holes with a1inch border and try them and see with one works for me.

Hey guys, I’m just starting to work on the hopper for this truck gasifier, it’s gonna be on a frame to slide in so it won’t be lowered in the box, so it will be above the cab a bit, so with what I drew up I’ll have about 34 us gallon of wood above nozzles, is that enuf or should I make it bigger

Use a conservative estimate of about a pound per mile, weigh up how much a 5 gallon pail gives you for your wood and crunch the numbers. I say a pound per mile even though others have experienced better. It’s best to expect lower performance and be pleasantly surprised.

Thanks Cody , I Weighed my wood and that will give me about 71 miles, I’ll make it a couple inches wider and higher to get a little more than that.

I’d say aim for an even 40 gallons at the most. Some run into problems with hoppers that are too big.

I think Wayne usually stops every hour or so to refuel, stretch his legs, and see if there’s anything amiss.

I find that about 90% of the time with both trucks dakota and dodge ram I load less than a full hopper . I think the next hopper I build will be a little shorter (cab level ) with the ability to clip on a hopper extension if needed for long trips of thousand miles or so .

I can’t remember ruining out of wood before I am already needing to stop for some other reason .

Hey I built one of ben’s gasifiers also i was wondering if you could share your print or where you got the plans for the cyclone. Thanks