If anyone wants to try a live video chat I’m here for a while.

This is a Google Hangout, similar to Skype but with up to 10 people. You don’t have to have a webcam to join but many laptops and phones have them built in.

I intend to leave it running and see what happens. It runs in the background while I’m working.

Had a nice chat with Chris Seymour yesterday. Thanks Chris!

Hi Chris Saenz, Been busier than a one armed paper hanger and have to head out the door. Tried to do the chat thing but google just said browser no longer supported. Guess I need a new computer, hard drive, operating system, and high speed internet to do the download. F it :o) The car is still running fine on wood chunks. It almost frosted here last night but clouds moved in and saved the tomatoes. I lost some over the weekend while we were gone at Lake Michigan and a wedding. Must have had a light frost. Stay well, Mike LaRosa

Hi Mike, good to hear from you.

Yeah this is browser heavy stuff. Probably tough over dialup too. However you can bring in telephone calls. Could even do a woodgas talk show or something, interview some of the woodgas celebrities. Hangouts can be broadcast live and posted to Youtube later. It’s a nifty format.

Yesterday’s hangout was a success. Thanks Pierre Gelinas, Michael Briere, Doug Brethower, and Don Mannes for dropping by, it was great to talk with you!

I would like to do this on a regular basis, maybe an hour per week. With a little structure and interesting content it could be sort of a casual radio show. Any ideas to add to that? What day of the week and what time would work best?

Here all afternoon, making charcoal. Stop by for a second. http://bit.ly/TUWdRX

Sorry I couldn’t make that work, I’ll bring the stuff from home next week. There’s got to be an iphone solution too.

Thanks for stopping by Carl and Wayne. Carl I’m sure we’ll get the issues worked out. At least we got to chat a little! 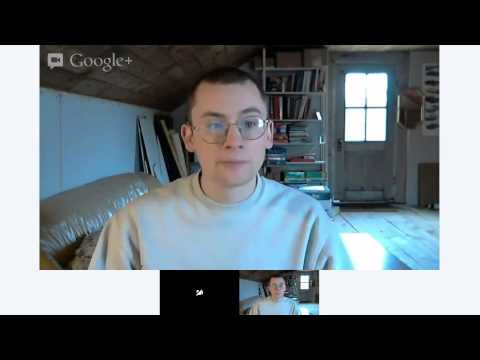 You can see what’s happening in the video above. If you just see a black screen, then there’s no one in the room.

After it’s over, the video will remain for viewing later.

Chris, your video is working great

Regular hangout today, no broadcast. Starts at 1pm EST. Stop by for a minute! http://bit.ly/Z2KCkE

Hey Chris
I had a great time hanging out today!!!
Even managed to fix my microphone volume after we ended the chat.
Looking forward to next week. Can we move the time to later in the evening like say 4-5pm ??
Sean

Thanks for coming by Sean!

Later will work fine for me, and I suspect it’s better for several others too. If anyone has a preference please post it here, and we can figure it out. Next week we’ll start Friday at 4pm EST, unless I hear otherwise.

For those who missed it today, we had Wayne Keith, myself, Carl Zinn, Sean French, and Don Mannes come by. Harry Graves actually stopped by Drive On Wood HQ in person while the hangout was going.

I got the mic working but my internet connection seems a little temperamental, will have to try again later