Other fuels besides wood?

Has anyone tried to use other fuels in a gasifier, like old tires or shingle tabs? Seems like either one would have lots of BTUs if they were added to the wood chips/ chunks, but I am not sure if they would run by themselves as the sole fuel supply. Maybe if you used the tire bits as small as your thumb nail and only added 5-10% with the wood chips?

Hi Tim, welcome to the community.

Tires are a tough fuel, literally - they’re full of steel wire and very difficult to cut up. Once you do, the steel is still there, and will melt together and clog things up. Since they don’t produce char, they will slowly use up your char bed. You’re correct that you’d only be able to use a small percentage mixed with regular wood fuel.

A better use for old tires might be one of those oil distillers, where you can reclaim oil from plastics and rubber by heat and distillation.

“If it dosn’t Grow - Don’t go.”
Tim B what this means if you are using any kind of Urban castoff waste you reaaly did not promote a solution versus just another variation of the problems got us here in the first place.
Fossil Coal - great for making money men more money “opportunities” and human mole miners.
DinoOil even greater for making even greater money"making" “opportunities” and sheeple addicted consumers.
Restaurant waste cooking oils show here locally that systems designed for it leads to a “need” to generate more fuel-oil input stocks. Fisticuff fights over limited restaurant output “greases” here now.

The choice to use grow-it-your self fuel wood stocks make you a self-sustaining self-freed producer.
Urban scrounging HC fuel stocks you are Still a big-money addicted fuel scrounger. Fine. Every complex system needs clean-up, reset efforts. Doing this for others though and you never be truly be Free then. Just a cog in the money-mans, now Tech-Priests machine.

And yes . . . I have sidewalk stepped over a “found” $20 bill. Wasn’t mine. I did not earn it. Did not want the enslavement so called “free”, “easy-money” always lures.
I do not buy lottery tickets or bright shiny non-factory wheels either.
Ha! Will pay the sin-tax on my drinking alcohols, bang-go-boom powders and such. Ha! Save my bootlegging risks for freedom energy pursuits anymore

Hi Tim,
On the charcoal side some have experimented with used oils, plastics etc. Personally I agree with Steve; if you build an infrastructure based on what is now considered waste in society as the energy picture worsens those wastes will be harnessed by people with much deeper pockets and influence then us. Already the cement industry is rejigging some plants for used tires. Waste veg oil is now in locked bins around here with the restaurant owners getting the service for almost nothing. If that does not discourage you check out the charcoal gasification section.
Best regards, David Baillie

Good morning and welcome to the site Tim.

As long as a good deep char bed is maintained I think just about any fuel can be added as long as it is dry and sized right . The main problem with adding this fuel is maintaining the char bed so the hot carbon will strip the oxygen from the CO2 and H2O being produced from the fuel burning above the char .

I think any fuel can be used if in a small quantity if mixed with fuel that will form char .

This link shows some test we did a few years back mixing in fuels other than wood at about 20%.

With the non wood examples that you documented, I plan on this annoying plant to add to the mix even if a hopper load takes me a few miles. My older brother took a super 8 movie of my back acre without a single tree or anything in 1967. Now it’s a forest with a single pathway and this mini tree is about half of the growth. I can pull them out of the ground with two hands. Weed powered truck anyone?
Rhus typhina - Wikipedia

I know for a fact that my unit will eat cheeseburgers, junk mail, weeds, grass clippings, garbage bags, sausage mcmuffins, bale twine, and still gets from point A to pint B. However, Wood is the best as it leaves the perfect sized char for what we need. I always mix this trash in with lots of wood.

Doug; I am surprised to hear you say you can pull them out with your hands. I have been tempted to cut some that grow between my farm fields. They would make a perfect size for my chunker. I planned on cutting them off. I read, however, that the little stump that is left will dry and get very hard. These can puncture a tractor tire very easily. Maybe I’ll give a couple, a tug and check it out.TomC

Yeah, that might be something to figure out and potentially avoid.

Hey Tom. I pulled one yesterday in mostly sandy soil. About a decade ago I had a friend come over with a brush hog and mow between trees. Big mistake. A year later an explosion of growth occurred. Me thinks the head of seeds were sowed well. I would in retrospect cut them down with a bladed weed whip, place them on a pile and light them up. Motoring down the road with them would be revenge.

Back in 2008 I ran some fuel test for a company up in TN. The fuel was compressed ( pelletized ) municipal waste ( garbage ) . It included anything you put in the garbage except steel . They had a machine with magnets to remove the steel but it left the aluminum in the fuel .

Most of the driving was done with 3 inch diameter chunks . The fuel did OK if mixed with wood , I drove the 91 dakota several hundred miles testing .

Also I would ax some fist size pieces from huge lengths ( picture below ) . Second pic shows left over pieces thrown out to help with soil erosion . 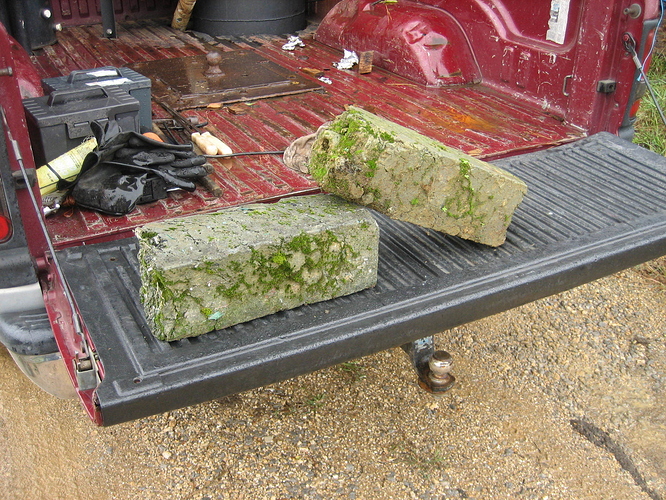 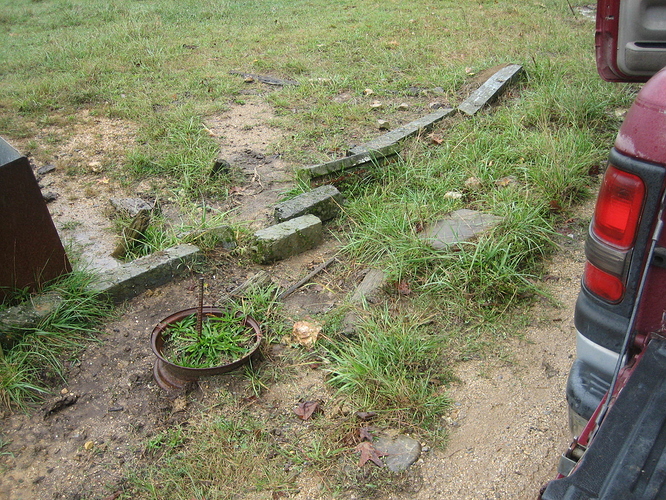 nice link chris I see a new project in my future

Doug; I went over and tried to pull one out today. Mine was in clay and about 1"+ on the stalk. It didn’t budge-- your a better man than I. Honestly I was a little disappointed. The stalk or trunk on mine were a lot smaller than I expected. Enough there to go cut and chunk some. After church, my wife said she would go to the woods with me and cut some wood. Lots of dead trees and limbs this year. I find it very hard to walk in the wood. It is woods because it was to hilly to farm.TomC

Hello Doug, if you could collect enough of those to put them in a pile and light them up, then the cone kiln described in this photo series would make some nice charcoal.

Ray, who has been under an outdoor burn ban since Spring…back in the Drought conditions!

Hi there Ray. I think that the satisfaction of chunking the stalks would be most appealing to me. We have burning bans in our township mostly just in the summer. Since someone called the fire department on me for a brush burn in which I had a garden hose nearby a few years ago, I use the three vehicles end to end to block the road view and just like the chicken that doesn’t see the hawk, it works every time.

Very interesting Ray. I thought there was something mysterious about using a true “cone”. I love it when people try something different.TomC

Yes, most of the other cone kilns I have seen have been ready heavy duty, and would involve cutting up a really nice piece of sheet steel. (BTW, I forgot to mention that if you click on the photo, it takes you to the whole photo album.) So, a 55 gallon drum opened up, resting on some steel T-posts, with scrap tin on the sides. This approach does require water to douse the char, so it doesn’t burn to white ash. I imagine a barrel of water in the back of a truck, take the kiln parts to the junk brush/wood, and fire it up…leave with 4 barrels of charcoal. Wow! When I first started making charcoal, in 2010, I was under the impression that it shouldn’t be extinguished with water. Now, 5 years later, my opinion is that if the charcoal is “done”, it doesn’t matter if it is put in an air tight container to cool down, or if it is doused with buckets of water, and spread out to dry. Our relative humidity under drought conditions is very low, so drying things is no problem. We have had zero rain since last June. My cows are ripping through round bales like mad, and if it doesn’t rain soon, there won’t be any grass going into Winter. Outdoor burn ban now includes Grills.