Anyone aware of any gasifiers designed for powdered fuel? (besides fluidized bed)

Crushed fir (1/4 minus) charcoal is about three times as dense as my standard 1.3lb/gallon grind at over 4lbs/gal.
Three times the run times would be very convenient.
1/3 the storage volume necessary would also be nice.
Crushed (or finely ground) is easier to achieve than 3/4 minus.

Closest I would compare to was when I used flaked charcoal using a cheap SunJoe electric wood chipper. I had an awesome density of 9lbs per 5 gallons. It ran very cool in the Mazda with my flute updraft.

I bet a gasifier like Don Mannes made for his Geo Tracker or Jeff’s Air Carbon Fuel Cell using a wide area with a grate.

I might build a little flute updraft again to play with that idea.

I’ll screen out 1/4" and use my window screen to get the worst dust out. I never had a 1/8" screen so maybe I was using a mixture of powdery fuel and flakes.

Edit: by the way I don’t recommend that wood chipper, it died eventually from all the dust.

The idea is interesting. Lots of technical problems thugh, but l will have it on my daydream list

When I built my first simple fire I could not get it to produce use able gas. Unusual for a simple fire. I posted a video of me filling the hopper and MattR commented on how sooty my fuel was as I poured it in. I removed the dust and it ran fine afterward. I think you may be able to do it with some type of drizzler.

Tom did you sift down to 1/8" or something more like window screen? I’ve always been fine with just window screen to get the actual dust out and have teeny tiny pieces.

Hi Chuck, gasification of fine coal or coal dust is definitely a good idea, in fact it would give you a large power range due to the possibility of rapid gasification of the dust, I think also producing good and clean gas. As you know, in my gasifiers I use wood chips from branches, where there are a lot of small pieces, bark and dust, which is converted into charcoal dust and small charcoal above and this travels down through the hot zone. This caused problems for me at first, but when I added the lower nozzle, things settled down, this tiny coal gasifies, the resistance adjusts itself and the gas is good. I am not saying that this is the ideal solution, but it is one of the possibilities. If I decided to make a construction for the gasification of coal dust, I would think like this:

Tone, I think in an updraft form factor it would be fairly easy to design something akin to your build and description. That way you do not need to worry about a grate to get plugged up. For charcoal I think the central nozzle would need to be very thick to withstand heat.

Cody, the upward process has its drawbacks, I would definitely not decide to install the air intake below and fill the funnel with coal dust, because ash would start to form below, which cannot move away and the resistance would increase,… For smooth operation I would install the nozzles under the top, so that they are still well covered with coal, and I would dose the coal dust from below and thus maintain the level in the gasification zone. The resulting gas and light ash would rise upwards and the ash would be separated on a cyclone. Imagine a glowing layer of coal dust covered with fine ash in a hot pipe, well, even the moisture that rises from the coal is thus directly converted into good gas in this hot zone.

Have you looked up the war-time Kalle (Källe) gasifier, it worked well with small fines (2-6mm)
advanced construction, but i think it deserves further attention and improvements.
We have to have in mind we got some better materials available today, for nozzle and sliding grate.
Ofcourse this gasifier has it’s drawbacks, but as i mentioned it are alot of improvements to be done.

My personal issue with the Kalle is how difficult it can be to reproduce at home. I think Gary Gilmore got the closest and had a good running copy. But if I remember correctly it had a demanding maintenance schedule. Checking the stainless mesh grate etc. Also finding the sweet spot to mix in exhaust gas to prevent the nozzle burning away. Don’t know if he experimented with silicon carbide, I think he used a TIG nozzle cup.

I had the same experience with the Kalle type. Fussy to build, fussy to maintain, and nozzle meltdown balanced on a knifes edge. I didn’t go so far as use engine vacuum to vary the reduction zone but I could move the nozzle in and out manually. Didn’t work very well with my small engine because any time the nozzle moved down into more fuel it caused significant restriction. I also became suspicious of the Kalle literature that described the screen as playing an important role in reduction… it looked to me like the screen did little more than reduce fuel blow by. I ended up thinking the ‘magic’ of the Kalle was in the premium graded small sized fuel:)

The experiments I’ve done with really small dense charcoal have gone pretty much as you would expect.
Trying to use 1/4 minus in updraft works really well for a few minutes and then it gradually chokes itself.
Leaving the 1/4 minus in with the 3/4 minus does pretty much the same thing but over a longer time.
Here is the aftermath of a run in a 16 inch diameter updraft where I left all the fines in with 1 inch minus (3/8 inch nozzle, 200 cc engine). As you would expect, it had very fast startup (like crushing fuel ahead of a Kalle nozzle), and good quality gas to start. Over an hour and a half run at 1kwe the mixture had to be adjusted to less air several times and the power began to drop off… when the engine would only sustain a 200 watt load I shut it down and opened it up. The glowing char bed was 16 inches tall! All the fine charcoal had been consumed from between the 1 inch pieces above nozzle.
This is a pic after emptying down to the nozzle where you can see the original fuel around the edges and the course pieces left over in the middle. 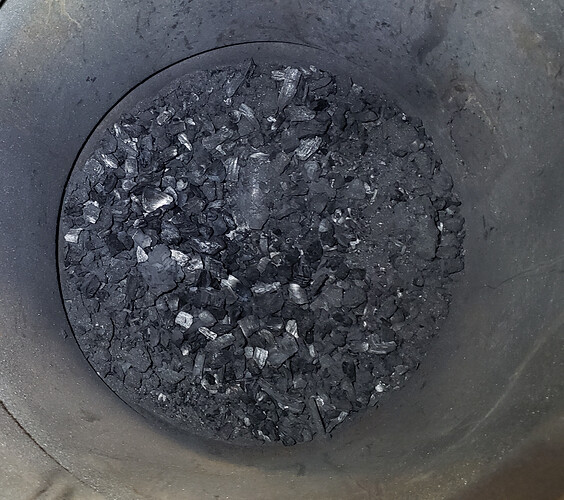 That is also what the Kalle did, all dust sucked back through the nozzle. And yes, it is a cumbersome build.

The fine dust and ash plugging issue is really obvious when you run gasifiers with identical fuel, nozzles, and engines but with different physical dimensions.
Because there is so much space for the ash and dust to go, this updraft 55 gallon drum gasifier will run a generator at 1kw for 10 hours, unattended (with one air/fuel adjustment after warm up).

This 16 gallon updraft unit, with the same fuel, nozzle, and engine, will start to plug up after three hours. Simply less space for junk to fill. 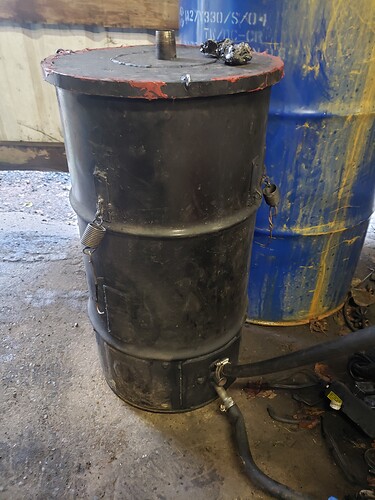 I had totally forgotten about the Kalle recycling of the cyclone dust… wonder what percentage of overall gasification it represented. If it is significant then just building a Kalle looking gasifier without that feature would be misguided. I know I didn’t try to do that with my build. hmmm

I grind my char to 1/2 inch and screen out anything that is smaller than 1/4 for bio-char. Originally I was not real careful about rescreening it after I ground it and even some ash got into it. Now I run it through a separate screening process. I have thought about washing it with water like some here do but so far have not seen the necessity for the extra effort and drying. I have never tried a long run like you describe and only one of my units, all updraft, has a 30 gallon capacity. The others are only about 10 gallons. I hope someone tries to build the unit Tone suggests. I’ll certain copy it. There is a lot of potential in this topic IMO.

I do not think l will ever build an updraft ever again, other thain as a proof of concept or in an emergancy.

In my Mercedes l built an updraft for to keep the gasifier height low. After less thain 50 miles the ash and dust wuld slowly start plugging the charbed, pushing the glowzone up. At that point the updraft gasifier made no sence any more, height wise.

I think runing pure dust trugh any classical downdraft hearth is utopia. If we want to run on dust, sadly l think we need to think outside the box, make something completely new. The fine mesh “afterburner” design comes to mind…

Another reason to target dust as fuel is the percentage lost in processing and handling.
I don’t know what portion it is, and it’s useful for the garden, but it would be nice to not have any waste.
Video of my charcoal grinder and the dust it wastes:
https://youtu.be/xsl8hTQHK6g

Grinder details:
1725 rpm, 1/4hp
pulleys are 1 and 18 inch
grinder rpm is 96
tooth height is just under 1/2 inch on a three inch tube
teeth and anvil are 4140 (not hardened)
fan winnowing instead of screening seems to work

That’s pretty similar to the smaller hand cranked grinder I made Chuck. I was going to build a better model but I can process a five gallon bucket of char in about 5 minutes so didn’t bother. I’m wondering if a catalytic converter for a wood stove could not be made to gasify char dust with some kind of eternal shaker to agitate the packed dust?

Above I rambled on a bit about the gasification of coal dust, but here is a sketch 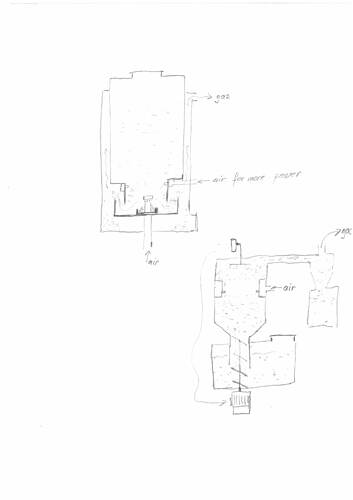