Back in the 1940, an Australian did some trials on wheat gas producer for vehicles. Got good results, by all accounts the whole operation was much cleaner and the calorific value of the wheat was quite high. Does anyone have details on how the control of the wheat flow to the burner was done. I understand one of the options he was experimenting with, was control by the exhaust flow. I have a 1933 Mathis U6F Lorry that was converted some time in the last War to run on Peat. Peat is not easy to obtain where I am. however spoiled wheat ism at a very reasonable price. So keeping the Lorry running on producer gas but changing the fuel to Wheat, would be a good option and keep her a bit different. Any info would be good. Thanks.

Larry Winiarsky has some good ideas on low-tech “feeding”.

I tried gasifying corn, it all welded together into a big hard clinker. Make sure whatever fuel you want to use does not do this as everything stops working when it happens. Tons of water in it too even though I used dried feed corn.

I’ve heard reports of corn or wheat being burnt in a pellet stove, that system works.

Corn in a stove usually has an agitator in the burn pot to keep the corn moving and prevent it from sticking together. Not sure if wheat clinkers up or not.

What is ‘‘peat’’ like and how does a gasifier differ from one using wood? Even in chip form. What about taking bailed hay and feeding flakes off the bail into the hopper? Tomc

Good questain maybe it can be pellitized. And then fed in at a controled emount after drying.I gess wood pellots are made with dry saw dust.

Here is a documentary on peat like they did it years ago in the British Isles. 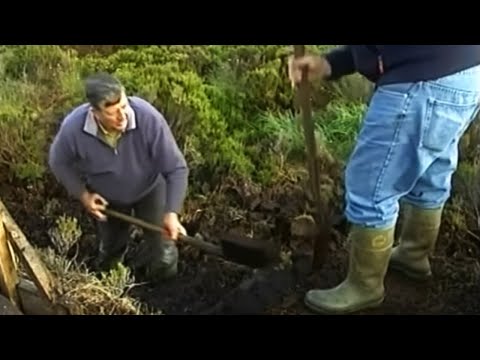 Thanks Don. Learn something new every day.
Bob

Thanks, Don. It’s like I suspected,mostly mud. 80% water. We might call it ‘’ muck ‘’ here. I have heard of marshes that were ditched around the perifery , and used as farm fields, catching fire and burning under ground for weeks. No way to put the fire out. I don’t think the sun is hot enough to dry that ‘‘pete’’ in Ireland n Will is going to do a lot of research to get his Lori running on anything except petrol. Tomc

Real educating vidio, no smart phone and lots of elbows. I never new what pete moss was.

It boggles the mind a bit, but they do manage to dry the peat quite adequately for burning. The equilibrium moisture content may be high there, but it’s within the parameters of other materials used for gasification.