Hello, new here and looking to build a gasifier. My question at this point in time is this. Just thinking ahead. I have a dual fuel generator that runs on either propane or gasoline. I know with a different regulator it can run on natural gas as well. Can the fuel line from the gasifier be connected in some way to the propane port rather than having to modify the carburetor?

No, the propane feed line doesn’t have constant vacuum. Propane tanks are pressurized, that’s how they feed to the engine. The regulator is opened by the engines vacuum momentarily to let a shot of LPG or NG through the intake.

Depending on the engine you can look on eBay or Amazon for Pod Filter adapters that replace the air cleaner. Then you can use a rubber hose or coupler directly to the carburetor. It’s normally for go karts or mini bikes.

Well that answers that lol. Thanks guys

Regardless if its just gasoline or a multi fuel set up. Woodgas is adapted the same way. You dont need to modify anything, you just need to remove and replace the air box with an adaptor you can feed the gas / air mix hose to. 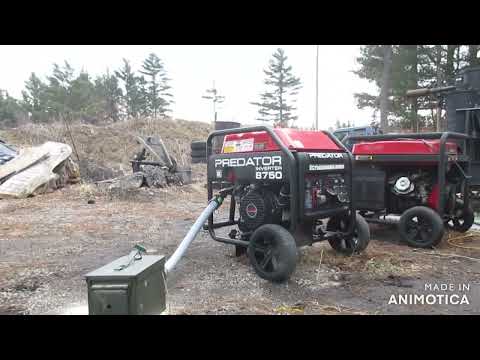 Well that answers that lol. Thanks guys

Sorta. woodgas also has a much lower energy density then propane or NG, so the port needs to be significantly bigger.

The propane inlet is like a pinhole, NG is just slightly larger, but wood gas needs like a 50:50 mix. (don’t quote me on the ratio I forgot what is actually is but you get the point. a pinhole isn’t going to be enough.)

So woodgas . . . at needing ~45-55% of the intake flow capacity to get it in would seem to starve the engine for enough air.
So less air, less power eh?
Less lab measure (open burning) BTU’s on woodgas less engine power too, eh?
No. And No.
The much simpler molecules in the fuel gas components of woodgas NEED farless oxygen molecules for complete stochiometric combustion. Remember internal combustion engines are heat Expansion engines. Combustion Heat expanded nitrogen and air argon count for piston pushing power too. Just like combustion made CO2 and water vapor.

Jim Mason was asserting this back around 2010. Asserting that woodgas done properly should be able to make comparable engine power.
Me and the diesel engine guys all objected, no way. Lacks the BTU’s.
We were wrong.

Joni and now others with much boosted compression ratios are saying they are getting much of the “lost” power back. Getting it back without the extreme ignition timing advances. The increased squeezing-turbulences speeding up the combustion speeds.
Sheee . . . this match up with some of the released published power fuels-use comparisons for the BIG industrial/marine engine suppliers in Austria, Spain and India. Many of them are variable drive stuffing into the engines BOTH “produce gas” and air in those 45-55% ratios. Gasifiers/cooling/filtering system being independently forced flowed not using the engine suction at all.
Complicated.
DIY, would be a keep all running in balance, a real hairs puller.

Boost up the engine c.r to propane limits. Use propane as your dual fuel might be the better ticket.

True dedicated propane mixers and natural gas mixers I’ve seen are much more open inside with very little venturi restriction.
Only by ditching out of the gasoline venturi carburetors can you open up to flow relatively bulky gaseous fuels better.
Then also with small electrical generator engines is the problem of varying the ignition timings.
Some assistance there in the new three advance levels built into many of the newer combi-coil pacs. Cranking-starting rpm sensed timing. Engine unloaded at rpm timing. Engine loaded timing.

(Long posts today, yes I know. Stuck inside with two very colds sick, kept home from school, little girls. This is my adult talking. Usually I can outside work. Read. And old-man snore-nap away.)