Just curious if anyone has ever experimented with some sort of Automatic/Proportional Ball Valve? Right now I control two ball valves by hand to give Wood Gas and Air mix. I have an Sensor Measuring RPM on the Output shaft of my 3HP Briggs. I was thinking of putting a valve like the one in the link below to control Air Flow? With the RPM Sensor and Electronic Air Ball Valve I should be able to get it to maintain and RPM when a Load is applied?

Here is a tutorial I did for an automatic mixture controller. That expensive valve I why I created my own system I refuse to pay for a valve like that. Cheers

If I am reading the signs right, you have a small electric generator driven by a gasoline motor? BS 3.5 hp.

You have so far not described your “gasplant”; so we do not know if it is OK to feed the motor…

Asuming it is OK, the next cheap, but working way of controlling the RPM independent of reasonable load changes, is to use the internal mechanical centrifugal regulator. If its precision is satisfying, that is.

The centrifugal regulator regulates the gasoline throttle, I assume?

The cheapest working way of doing it for woodgas, is to use a double-throat twin throttle-body. Ganging the throttle-flaps together, if they are not already on the same shaft, keeps their flows identical and the gas/air mix at 50/50
as long as you are on part load.

When using up to full load the gasplant’s resistance in comparasion to the air intake will become significant, making the mix too lean. Because their (gas and air) individual resistaces become greater than the throttle-body resistance.

In this case, you need an “extra” manual inlet-airflap to balance the resistance of the gasplant’s resistance.

This is a cheap way to learn to handle whole the system, before handing out money before the thing is familiar…

Thanks Matt and Max.

I have thought about going the RC Servo route but I just don’t have the fab shop to make nice brackets to mount servo to Ball valve.

I do like Matts idea of using the Wideband exhaust sensor. I might just get one of those first to see what kind of ratio I run at.

Max,
As far as getting a handle on system. I’m pretty good with moving the Ball valves by hand. I took off the Carb and mounted valves. I’m spinning a 10Si alternator then to battery and inverter

I am still struggling with Flare start up and tar issues. I don’t plan on getting parts for expensive control system till I figure out the Flare issues and tar. I am real familiar now with removing cylinder head and pulling out valve to clean tar from stem with torch. 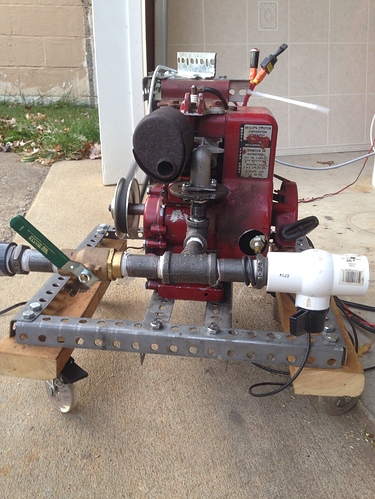 A preferable way is to oil-in the motor for the winter and concentrate on getting the gasifier and fuel formula in order first!

Do you still have the original carbureator & governor linkage for that engine?

I have an non rebuild version of Carb. I put a new gasket kit on the Original one and put it on my Dads engine, the rebuilt carb worked on my engine and my dads. The Engines were 1960s Toro power handle and Briggs still sells Gasket kits.

I have several Belimo valve on a solar hot water system and a proportional Belimo damper controller on a refrigerator size egg incubator. They take about 90 seconds to turn about 90 degrees. That might not be fast enough for any sudden changes in the engine. Also note that the PWM output of the Arduino is not clean enough to control these valves with a 0-10VDC signal. With help from Pete Stanaitis we did get a circuit so that an Arduino could control the proportional Belimo. If you are still interested after know the slow speed of these units I can get you more information.
Several years ago I made up an Arduino program to control and monitor my wood gasifier. I did use a servo to adjust the air into the system. The servo moved the choke butterfly valve. I moved on to charcoal gasifiers and different engines and haven’t automated the gas mixing on them. They don’t seem to need enough adjusting to warrant the effort to automate.
The gasifier monitor is here http://www.hayriv.com/arduino
Gasifier IR
Gasifier Monitor
GasifierGraphing
Some of this is out of date.
Here is my multi-mode freezer conversion
http://farmhack.org/tools/multi-mode-dead-freezer-conversion
The writeup is not nearly complete. It uses the proportional Belimo to tip 120 eggs in the incubator mode.

Hi George,
I saw some Belimos have that 90 Sec run time. The LRQB24-MFT is a quick running one, its at 5 sec vs 90. It sounds like its a decent brand if you used it on a couple of projects. If it fails on the gasifier, I can clean it up and make a solar water heater!

Also I saw you were using Difference pressure sensors. I never saw those before. Thanks